Well, it was bound to happen. The War of the Foodies has broken out on Facebook.

A couple of weeks ago, the Memphis Sandwich Clique group sprung up on Facebook. It is a place where people could post photos of their favorite Memphis sandwiches. All the group’s creator asked was that people be as descriptive as possible, and only post sandwiches from locally-owned restaurants. This is a great way to promote local businesses. I know that Sam’s Deli and RAWK’n Grub are two that have benefited greatly from the exposure. I searched past blog posts and posted three photos of gyros from Cafe Med on Kirby Parkway near Poplar, a restaurant overlooked by many because Petra, which serves a similar menu, is nearby. Best gyros in town, in my opinion.

In addition to posting their favorite sandwich, members can ask for recommendations, which is where the trouble began. Someone posted, asking what is the best Memphis sandwich with bacon on it. I definitely had an opinion on this! The Mr. Crunch open-faced breakfast sandwich on Pontotoc Lounge’s brunch menu, with sous-vide bacon more than an inch thick, Mornay sauce and cheese, is phenomenal. That was an acceptable reply; since you can’t pick the sandwich up, I was pushing boundaries a bit, but I was still promoting a great local business.

However, a friend of mine replied, “Baconator,” the sandwich from Wendy’s with extra bacon. That earned him a 24-hour ban from posting to the group for violating the “no chains” rule. He responded by forming his own Facebook group, “There are many other foods besides sandwiches that are great.” Only 2 days old, the group already has 433 members. They are making all kinds of good food posts, and as is the case with Memphis Sandwich Clique, people are discovering a lot of local restaurants as a result.

The only thing I hate about it is the personal attacks. The founder of the non-sandwich group has called the founder of Memphis Sandwich Clique a “douchey hipster” among other derogatory names. The non-sandwich founder claims his Baconator post was actually not a violation of Memphis Sandwich Clique rules because the Wendy’s in Memphis are locally owned. While that may be true, I think it’s a dubious excuse. Wendy’s is not a locally owned chain in the sense that Huey’s and Pirtle’s are.

I’m not pleased with the behavior on the Memphis Sandwich Clique side either. Specifically, members on there have been bashing the place where the non-sandwich group founder works, Max’s Sports Bar. Ironically, Max’s is exactly the kind of place Memphis Sandwich Clique was formed to promote. Max’s has a full menu of steamed sandwiches and is owned by a local who wants nothing more than to give his community a place to come together and bond over sports, beverages and food. I hope many people discover it because of the new non-sandwich group. (I just hope they discover it on a day that’s not College Football Saturday when the place is already packed to the gills.)

Can we all just get along? Both groups are an asset to the city, and if we can all just be excellent to each other there is a vast opportunity to discover some great Memphis food and support area businesses. On the other hand, if the discussion continues to devolve into bashing and name-calling, people are going to get fed up and both groups will wither away.

In related news: Front Street Deli is offering 10% off to members of Memphis Sandwich Clique this month.

The Memphis Grizzlies have announced their preseason schedule. The home games are

Jennifer Biggs of The Daily Memphian has a look at the Bi Bim Breakfast at Sunrise Memphis. It’s a breakfast taste on the classic Korean dish bibimbap.

The South Main Association has now lined up a speaker for their Tuesday, August 13 meeting at Malco Powerhouse, and they didn’t have to look far to find one. Thomas Gandee, GM of the theater, will speak. 6:00 social, 6:30 presentation, and following the meeting there will be half-price tickets for SMA members who want to stay and see a movie.

Max’s Sports Bar is now booking fantasy football draft parties. When you book your party at Max’s, you get a free draft kit plus 15% off all food and drink during your party. Call 901-528-8367 to make your reservation.

Improv Underground returns to the Brass Door Friday, September 6. The show will be in The Cavern downstairs and will start off with members of the Bluff City Liars competing for your laughs in short-form style. Then select cast members will perform long-form comedy. $5 cover, and although the Door allows all ages, the show is recommended for 18 and up because of the content.

There will be a CitizenFEST interest meeting at the Cossitt Library, Front and Monroe, Tuesday at 6:30 PM. The first CitizenFEST brought a diverse group of Memphians together to discuss ways they could be good citizens who bring positive change to their community.

Cigar store Robusto by Havana Mix will have happy hour with K97 DJ Big Sue today from 4 to 6, doing a remote radio broadcast as they gear up for the Beale St. Cigar Festival on Labor Day weekend. Lots of $5 drink specials today.

The folks at metaphysical shop The Broom Closet report that South Main is once again open to through traffic. It had been closed between G.E. Patterson to St. Paul for all but local traffic while renovation of the new Central Station Hotel took place. I know the owners of the businesses on that block across from Central Station will be very relieved.

Local brewery Wiseacre has announced its Oktoberfest will be Saturday, September 28.

I want to warn everybody of a Facebook scam that is going around, a post titled, “Honor your pet who is no longer with us. What was their name?” Name of a childhood pet is a very common question used in identity theft. Don’t give out this information. Worse, some people use their pet’s name as passwords on websites. That makes it doubly bad to freely share this information (and you really should change your password).

LGBTQ-friendly bar Atomic Rose is starting Hangover Hangout on Sundays. They will have a $10 breakfast buffet from 11 to 2. They’ll have drag bingo from 1:30 to 3, followed by a tea dance from 4 to 8. What the hell is a tea dance? Let’s ask Wikipedia.

Grizzlies Night at the Redbirds will happen Thursday, August 22 at AutoZone Park. The Redbirds will wear special Grizzlies-themed jerseys, which they will autograph and auction off after the game. Proceeds from the auction will benefit the Redbirds Community Fund and the Memphis Grizzlies Foundation. There will be a specialty ticket for this game ($49 dugout, $48 field box, $55 club) that includes

Starting next Thursday, Loflin Yard will host a weekly 4-7 event called Dog Days of Summer. Each week a different charity will be chosen, and a dollar from each beer sale will be donated to that charity. For the initial event, Memphis Humane Society will be the charity.

I saw the weirdest sport on ESPN2 yesterday. Trolley drivers run their trolleys into huge inflatable bowling balls, propelling the ball forward where it knocks over huge inflatable pins. We need this in Memphis! Imagine what a signature event this would be for a neighborhood like The Edge or Madison Heights.

I normally stay out of the discussion on the Save Tom Lee Park and the Festivals Facebook group, but this week a point was raised on there which was quite valid. Due to his stated stance on Tom Lee Park (scrap the plans to renovate it and do away with Memphis River Parks Partnership), there is concern that Willie Herenton could win the mayoral election, despite the fact that King Willie was a much worse mayor during his last term than Jim Strickland is now. Let me tell you something: Willie doesn’t give a damn about Tom Lee Park. He is an opportunist who is hijacking this issue to get votes. He’s using the people who support keeping Tom Lee Park the way it is. Don’t be fooled.

Cheers to Neil Hines, proprietor of Neil’s Music Room out on Quince, for his decision to make his bar nonsmoking effective August 15. Excellent decision that is good for the health of his patrons. In the years I’ve been down here, two of my favorite bars, Silly Goose and Max’s, have gone nonsmoking. Although there was griping, business has gone up at both bars. The people who swore they’d never go to those places again, still go.

Rocker Sammy Hagar visits Memphis for a gig as the honorary Peabody Duckmaster:

A friend of mine ordered these recently: Psycho Pickles. These are pickles which come in a jar with six ghost peppers to make them super hot. The longer you wait to eat the pickles, the hotter they become. Once you’ve eaten the pickles, you can use the ghost peppers for cooking. Sounds delish!

Grizzlies Prep academy students are looking for adult lunch buddies.  A lunch buddy meets with one of the boys at the academy one day a week and has lunch with him. Lunch buddies serve as role models for the boys, helping to point them in the direction of success and preparing them to be college-ready. If this sounds like something you would want to do, spots are available!

I don’t know if I have any vegetarians who read this blog, but on the off-chance that I do, I want to share with you a vegetarian special that Venga, the Mexican restaurant in Puck Food Hall, has all this week. 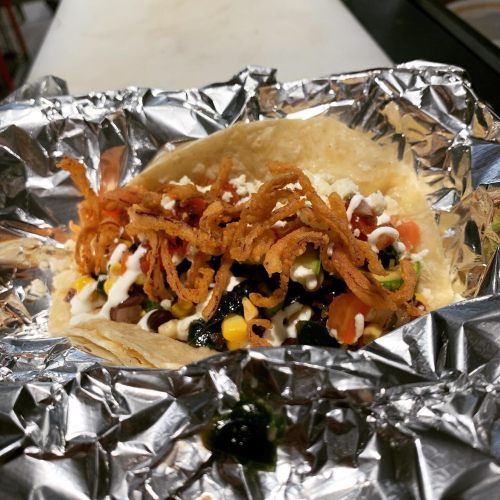 Overheard at the Silly Goose yesterday: “Hey, is this your bra that you left here the other night?”

Rizzo’s is collecting school supplies to be distributed to nearby schools at the end of the month. Any donation large or small is appreciated.

Great quote I saw on Facebook yesterday: “A lot of problems in the world would disappear if we talked to each other instead of about each other.” Very true. It kills me how people who want to understand what’s on my mind ask my friends instead of coming directly to me and asking me. My friends are not mind readers.