As your number-one source of news and information about The Edge District, it is my pleasure to link you to this Memphis Business Journal article about BOXLOT, which is opening today. BOXLOT is a shopping center made of shipping containers. It will be in the parking lot next to the former Kudzu’s on Monroe Avenue near Marshall. Kickspins, one of the stores in the center, will sell new and used records and equipment and will sell new sneakers and restore old ones. Majik will sell ’80s-early ’00s nostalgia clothing and items. IKEA will have a small showroom as well. Tomorrow there will be an IKEA furniture-building contest, with winners receiving IKEA gift cards and the furniture donated to Hospitality HUB after it’s built.

The former Dirty Crow Inn was bought by Aldo, owner of Bardog, Aldo’s Pizza Pies, and Slider Inn several months ago, and now change is coming to the Crump Boulevard bar. The bar has been renamed Momma’s Roadhouse. Aldo plans to keep it a dive bar as Dirty Crow was. He plans to appeal to industrial workers in the area and truckers coming off I-55. At some point he would like to add a third-shifters’ breakfast, having seen the success of that concept at Bardog.

Bardog, by the way, has been closed for the past couple of days. I hear it’s due to some plumbing issues. They’re hoping to open in the evening today, but I’ve been told it may be Monday. Blind Bear was super busy last night as many of the Bardog bartenders, servers, and regulars migrated there.

One last reminder: Kitty Cats and Yoga Mats is happening tomorrow morning at the Memphis Humane Society. (Click image to view in a larger size) 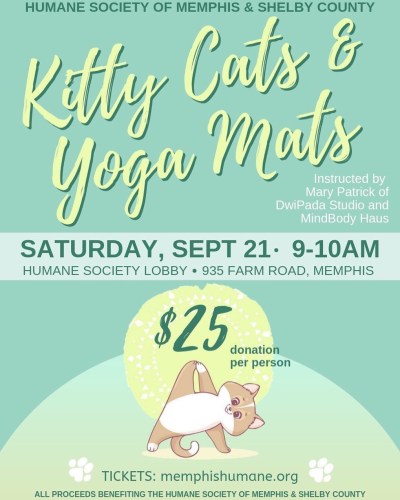 For a $25 donation to the Humane Society, you can do yoga as adoptable kittens walk around.

The MBJ has a slideshow of plans for the new, improved Cossitt Library scheduled to open next year. In addition to traditional library features, Cossitt will have a recording studio, cafe, courtyard, and meeting spaces with river views. I attended a presentation on the plans back in April, and let me tell you what, this is going to be an incredible meeting space.

There will be a Fall Night Market tonight from 5 to 8 at River Garden, the park at 51 N. Riverside. Vendors include

There will be music by DJ Zetta, the Tapbox will be selling beer, and 4th Cup will be pouring coffee. At 6:30 there will be a special storytelling session based on communities around the Mississippi River.

Yesterday I took advantage of the half-off pizza special from 2 PM to 5 PM at the Silly Goose. I tried one of their newer wood-fired pizzas, The City Block. 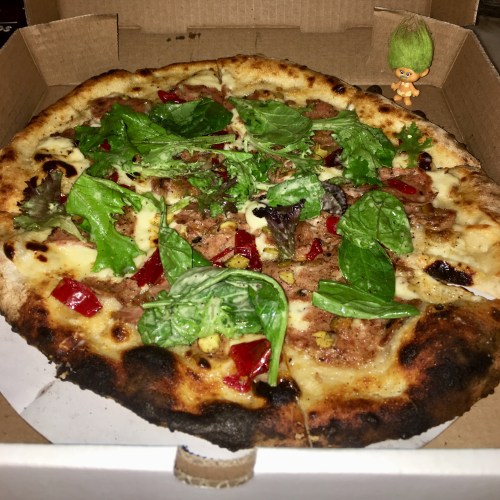 The City Block is so named because the Goose sources meats from the pizzas from City Block Salumeria in the Puck Food Hall in 409 S Main. The pizza is topped with Brie spread, Mortadella, Asiago cheese, black pepper, Calabrian chili, and arugula. Never thought of Brie on pizza before but it really works. The Big Cheese remains my favorite though.

The past two weeks have answered a question I had when I first heard the Goose was getting a pizza oven: How were they going to differentiate themselves from Aldo’s Pizza Pies around the corner? Aldo’s is more of a traditional New York-style pizzeria with toppings everyone expects like pepperoni, sausage, green peppers, onions, etc. (Although, they have a list of deluxe toppings too.) Whereas, the Goose serves gourmet pizzas that pair well with one of their specialty cocktails or a nice glass of wine.

The pizzas pair well with PBR too.

CB Bob Sawyer, who played with Nancy Apple and played at Dan McGuinness pub in Peabody Place back in the day, is organizing a good old fashioned pickin’ party to be held at Westy’s next Friday, September 27. Just like the old days at Kudzu’s, bring your instrument, they’ll have a PA, and everyone will sit in a circle and jam out and the mike will be passed from one person to the next.

Operation Broken Silence is having a spaghetti benefit dinner tonight at Arcade restaurant from 6 to 9.

That’s it for now. Off to work. Back tomorrow.