Y’ALL! My yoga teacher friend Mary Patrick taught her Kitten Yoga class at the Humane Society yesterday, and it made channel 13 news! Looks like they had a full house. The camera primarily focused on the kittens, and the interview was with a Humane Society employee, but Mary can be seen walking among the students in a gray top and red leggings.

Take a class from Mary! She teaches

Mind/Body HAUS is in Cooper-Young and DwiPada is in the Poplar/Perkins area. In particular I hear that the Sunday Hot HAUS class is extremely popular.

After picking up the watch, my friends Randy and Theresa and I caught an Uber south to Momma’s Roadhouse, the former Dirty Crow Inn on Crump now owned by Aldo. Here’s a look at the new menu (click to view in a larger size): 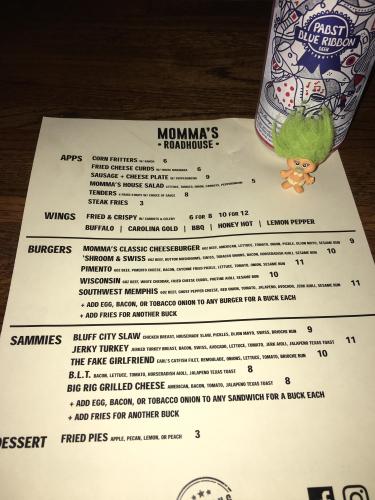 They have PBR in 16 ounce cans, and I think I saw 24 ounce cans (a holdover from the Crow) in the cooler as well.

Well, yesterday took a weird turn on social media. A friend of mine, who is a manager at a local bar, made a funny Facebook post about how most schools wouldn’t start a quarterback who was blind, but Tennessee did. That led to a Vols fan responding that he was going to go public that the bar manager’s place of business discriminates against handicapped people. The Vols fan ranted on and on, threatening my friend’s livelihood, drawing “Is he (the Vol fan) crazy?” reactions from people who live and work in the Downtown core. I have had FIVE different women complain about this person even prior to yesterday’s comments. May be time to seek some professional help, dude. Here’s some inspiration for you: 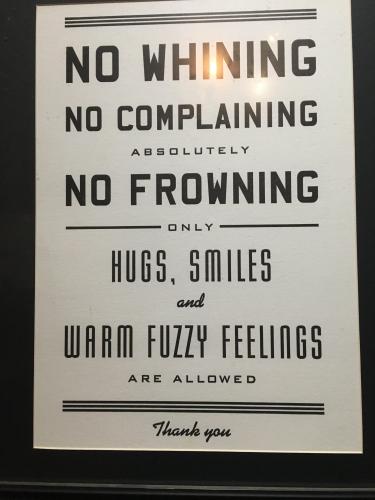 Oh, but, hey. That wasn’t you posting to Facebook yesterday. That was the alcohol posting. You never do anything wrong.

Chocolate salty ball shots should come with a warning label…

I do want to apologize to my friend Will for not letting him change the channel off the Florida game so he could watch his LSU Tigers. I felt bad about that because I know how passionate he is about his team. It’s just that watching Tennessee get stomped is one of my true joys in life. Nowhere else in this state (not even The Pumping Station) will you see grown men in orange and white checkered overall rompers. All they need is an orange clown nose to complete the outfit.

Tennessee has beaten the Gators a grand total of once since 2005. At this point I don’t even know if I’d call it a rivalry anymore.

Next Friday, September 27, on South Main Trolley Night, Stock & Belle at 387 S. Main will have an opening reception for local artist Zac Roach’s “Cosmiks” exhibition. His works have been exhibited in New York, L.A., and even Tehran, Iran.

The annual Walk a Mile in Her Shoes march happens this Wednesday, September 25. This year it starts and ends at the University of Memphis campus, rather than being Downtown. At this event, men and boys put on women’s high heels and march in support of putting an end to domestic violence against women, rape, and sexual assault.

That’s the news for now. Back tomorrow or Tuesday with more.