There’s a new Downtown writers’ group that convenes weekly, on Thursdays from 11 AM to 2 PM (although, you’re not expected to stay the whole time; just show up on your lunch hour). They will meet at Cafe Keough until the new Cossitt Library opens, and then they will move to the library. 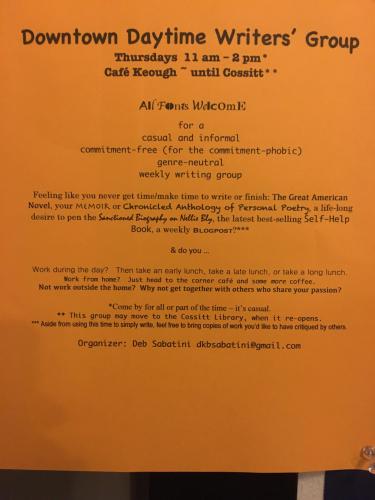 Click the image above to view in a larger (readable) size. There’s no weekly commitment to the group, and it’s genre-neutral – whether you are a poet, a novelist, a nonfiction writer, a blogger, or whatever, you are welcome. You can also bring copies of your work to be critiqued by others. To get more info on this group, email dkbsabatini@gmail.com.

Just to be clear, I am not associated with this group in any way… yet… but since I get off work at 1 and they go until 2, I may come home Thursday, grab my MacBook, and head downstairs to Keough. Only thing is, I usually do my daily update posts in the morning before I leave for work, so I’ll probably spend my time mining news for Friday’s post rather than actually writing.

Tinder Box cigar shop on South Main hosts the 5th annual Memphis Smoke today from 1 to 6. They’ll have over 20 cigar, pipe, and tobacco vendors on hand. Live music by Charvey Mac and Vanelli’s Deli will be there with BBQ. There will be multiple door prizes that you can win. Special guests:

There’s a VIP ticket you can purchase to Memphis Smoke that gets you in the after-party at Loflin Yard, where there will be food, an open bar, and one-on-one time with the vendors.

Pontotoc Lounge will have an 8-course dinner by 5 chefs Thursday, October 24. Here’s the menu: (click to view in a larger size) 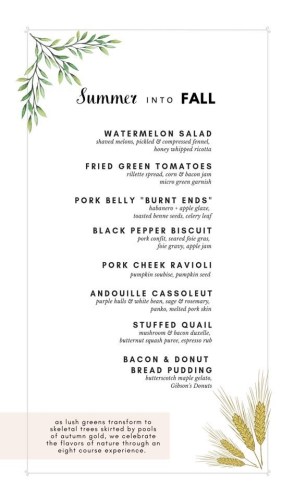 They say you can make a reservation for the dinner on Resy but it looks like just standard lunch and dinner reservations on that site rather than for special events. I’d recommend calling them at 901-207-7576 to secure your spot.

The Cannon Center has added an evening with pop superstar Amy Grant to its calendar. She’ll be here Saturday, January 25.

I tried one of those bourbon cider slushies at Max’s Sports Bar last night. 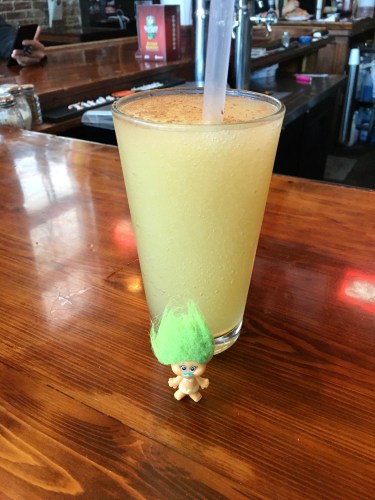 The flavor was absolutely on point. Cider taste with a hint of nutmeg, and you can’t even tell there’s bourbon in there. I recommend getting one if you go down there to watch the games today.

Reminds me… when you’re a winner you tap all available resources to stay at the very top of your game. I bet Alabama head coach Nick Saban called Georgia State coach Shawn Elliott this week to pick his brain for pointers on how to beat Tennessee.

The Grizzlies are giving away 500 tickets to Friday’s season opener. Be at FedExForum at 9 AM Monday to pick up your pair.

Following the Tennessee Supreme Court’s refusal to hear a case, Greenspace, the nonprofit that owns the Confederate statues that used to be in two Downtown parks, is free to do what they want with the statues and wants them out of Shelby County. My suggestion is to toss them off the bridge and let Ol’ Man River decide where their new home will be. I’m sure they will be quite a hit wherever in Mississippi they wash up to shore.

The new Friday Night Smackdown comes to Memphis on January 5. Following its move to Fox TV on Friday nights, Smackdown has become WWE’s A-show, featuring the likes of World champion Brock Lesnar, Roman Reigns, Daniel Bryan, “The Fiend” Bray Wyatt, Bayley, and The New Day. This show is only a couple of weeks before the Royal Rumble and should be a good one. Here’s a video from the October 11 Smackdown that made a lot of kids cry:

There is still time to enter a team for the Memphis Grilled Cheese Fest happening at the Hi-Tone Sunday, November 10. They’re also still accepting vendors and volunteers.

NBC has decided not to order additional episodes of Bluff City Law. The drama series will complete its initial 10-episode run, but a season 2 looks unlikely.

Don’t forget that the last Memphis 901 FC home match of the season is tonight and they invite you to Pink Out the Pitch.

There’s a Great Pumpkin celebration at Bass Pro at the Pyramid this weekend.

That’s it for now. Leading off at Bardog today, then heading over to Blind Bear to watch the Memphis game and then the Alabama-Tennessee game. Back tomorrow with more news.