Yesterday about 4 I made my way south to try the new Slider Inn Downtown location. Although the address is 363 Mulberry, the entrance to the main bar area is on Talbot, a half-block east of Main. If you’re not good with directions, walk on South Main until you see the vacant field where the bocce ball court used to be. Turn on the intersecting side street (which is Talbot) and go to the building immediately behind the field.

The main bar is L-shaped and much bigger than Slider Inn Midtown’s main bar. I counted 12 seats. Behind it is a community table, perfect for drinks and conversation while you stand. Along the wall is plenty of seating for couples and groups.

The main bar is only one of several parts of Slider Inn, though. This is Aldo’s first restaurant to have a loft area, a smaller, more private space that reminded me of The Brass Door’s loft in terms of feel. There is a second building offering an additional bar and seating. Between the two main buildings is outdoor patio seating, which I suspect will be rarely used until March. Out back is the previously mentioned field, the part of the space known as Slider Out.

They have about 10 local and regional craft beers on tap, with two more taps remaining. They didn’t have domestics in yet, so I ordered a Memphis Made Fireside, one of my favorite local offerings. One of the managers smiled and said, “Paul, don’t worry, we’re working on getting some PBR in here for you.” I didn’t try one but Slider Inn Midtown’s signature Jameson slushes have found their way to South Main.

They’re operating on a limited food menu for now, and should have the full menu next week. I took a look at the limited menu: (click to view in larger size) 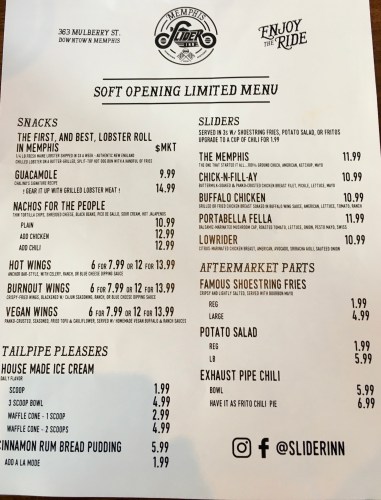 What really caught my eye was the Exhaust Pipe Chili, which can be made as Frito Pie. However, they were out of chili, so I took a second look at the menu. I’m always up for some wings. However, I wanted to get a menu item I couldn’t get at Bardog, so the Hot Wings were out. The Vegan Wings, made with tofu and cauliflower, weren’t under consideration either, although I think it’s great that those are on the menu for people who adhere to that lifestyle. That left the Burnout Wings, crispy-fried, blackened with Cajun seasoning, with celery and a side of ranch or blue cheese for dipping. 6 wings for $7.99 sounded perfect, and I put in an order.

While waiting on my food, I got up to use the restroom. “The bathrooms are right there, Paul,” Aldo said as he saw me in the hallway. “Go on either side. They’re gender-neutral.” In the middle of the restroom area were sinks you can wash your hands, out in the open. On either side of the sinks are six doors, from floor to ceiling that you can lock so that you have complete privacy, with toilets behind them. That is great! Very appropriate for the times and eliminates situations where there is a long line for the ladies’ room and no line for the men’s, or vice versa.

My food came out about 10 minutes after I ordered it: 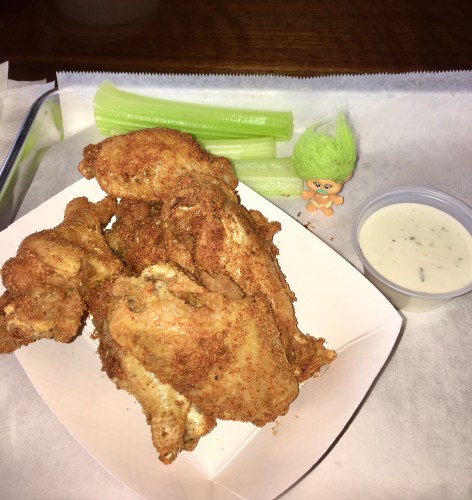 The wings were perfectly cooked and juicy. The Cajun rub added a nice flavor, a bit spicy but not overpowering. You are going to get some of the rub on your shirt, so you might want to consider that before wearing a white shirt to Slider Inn. The wings reminded me of the dry rub wings at Central BBQ a bit. It didn’t say on the menu that celery came with the wings, but it did and it was a welcome counterpoint.

Aldo and I had a good conversation, and he told me that his mom still reads my blog every day, and sends him a full report of anything I write about his businesses. Cheers, Mama Aldo! It will always mean a lot to me that you sent me a card after my mom passed away. I still have it on the counter in my apartment, next to a love bug which was the last stuffed animal my mom ever gave me.

I got to hear Aldo and a few of his people talk business. I promised I wouldn’t report anything specific until he’s ready, but I will say this – sounds like good things are coming to one of his other restaurants.

Slider Inn will be open 11 AM to 7 PM today and will begin full business hours of 11 AM to 3 AM tomorrow. Aldo says they want to keep going late into the night. I think that will be great for the neighborhood. More places open late = more eyes on the surrounding streets = criminals will be more likely to go elsewhere to practice their trade.

Oh! One other little detail a lot of people might not have noticed, but I did. The main room has 5 large flat-screen TVs, and one of them was tuned to CNN. There’s this popular belief among bar managers that every TV in their bar has to be tuned to ESPN, ESPN 2, ESPN Classics, Fox Sports, NFL Network and the like. For sports bars I can see that, but for other types of bars it’s good to have some variety. I was a lot more interested in what happened in the first day of impeachment proceedings that I was in whether the Raptors will rest Kawhi for their next game, or what NFL teams would send scouts to Colin Kaepernick’s workout.

One more thing too… when the weather is nice, Aldo told me, he wants to have events in the empty field out back known as Slider Out, and he wants to bring food trucks on site. Most restaurant owners are threatened by the presence of nearby food trucks, yet Aldo invites them! That’s a man with confidence in his product.

Walking up there, I wondered what the regular crowd would look like. Would it be mostly the South Main crowd that I associate with Max’s Sports Bar? Would it feel like Slider Inn Midtown? Would a lot of Bardog regulars come down there? Although it’s hard to say having only been there one night, the place felt more like Slider Inn Midtown than any currently existing Downtown spot. Hard to tell having been there just once though. I will surely go back!

South Main is just BOOMING! For years and years, Max’s Sports Bar was my sole outpost in that neighborhood. Now when I venture south (which I surely will more often) I will have choices. Slider Inn? Longshot? A visit to Central Station to try their Eight & Sand bar? Pontotoc Lounge? Bar 409? I could make an entire day of it down there. Hmmm when spring rolls around, Farmers Market in the morning followed by Slider Inn when they open at 11 seems like an interesting option.

Long post already and I haven’t even got to a HUGE news item about Downtown that dropped yesterday. New York developer Tom Intrator has released plans for a $1.1 billion mixed-use development in The Pinch District. Some buildings would be up to 18 stories tall and the plan calls for 942 apartments, two hotels, and hundreds of thousands of square feet of retail and office space. What a game-changer that would be for a neighborhood that has been a ghost town except for the MATA north end terminal and a few restaurants and a coffee shop. Those apartments would make it possible for those who work at St. Jude to be able to walk to their job. Intrator says his goal is “to bring a different type of neighborhood to this city.” Downtown is really firing on all cylinders now, and the possibilities seem endless.

The Memphis Farmers Market’s Turkey Market is this Saturday, and Cousins Maine Lobster will be there. (Although, you can now get a lobster roll a few blocks up the street at Slider Inn anytime you want)

One more note about Slider Inn since I’ve circled back around to that topic: Not only were the Burnout Wings good, they were good for me, apparently. A study found that people who like spicy food live longer.

Elmwood Cemetery will host Carols of the Victorians Thursday, December 12 at 6:30 PM. St. Mary’s Episcopal Cathedral will have people there for a night of history and music. There will be wassail, card-swapping, wine, Victorian-age carols, and historical facts about the music you hear. $20 general admission with kids 12 and under free.

The Andrew Michael guest chef series at their family of restaurants continues this Sunday, November 17, at the Gray Canary 5-9 PM. The Canary will host Edouardo Jordan, owner of JuneBaby, a Southern-style restaurant in Seattle. The restaurant won the 2018 James Beard award for Best New Restaurant, and Jordan won the 2018 James Beard award for Best Chef Northwest. The menu is a secret until the guests arrive. Cost is $75, with optional wine pairings, benefitting the High School Pantry program at the Mid-South Food Bank. 901-249-2932 to make reservations. (Thanks to Edible Memphis for posting this information)

After Slider Inn last night, I headed back north for trivia at the Blind Bear. As always, I stood Perjorie T. Roll on the bar for good luck. A lady from Ohio sitting next to me asked, “What’s the significance of the troll?”

“It’s a long story,” I told her, giving her a much shorter answer than I would if the person asking had been from South Main. “But she’s here every week to bring us good luck.”

The lady told me that in the ’80s and ’90s, she used to collect trolls, and had over 100 of them, so she was fascinated to see someone with a troll in modern times. “I don’t have a collection,” I explained. “This is the only one I have.”

Perjorie did not bring us good luck, though – we finished dead last. However, even to that there is a benefit. Patrick came over and told me that I get to pick the topic of one of the rounds next Wednesday. I looked down at Perjorie and seriously considered picking “Trolls,” but decided against it since movies are my weakest subject. I picked a category I’m strong in, and a sub-category a buddy of mine is strong in. Got to talk with him and see if he wants to play on the same team next week.

Time to get to work, where Big Data is the name of the game this week. Getting back into the IT mindset of refusing to give up just because the first 3 or 4 or 10 solutions I try don’t work. Back tomorrow with more news.