Greetings! I’m Perjorie, Paul’s troll. I requested to write today’s post for what is sure to be a historic weekend here in Memphis. 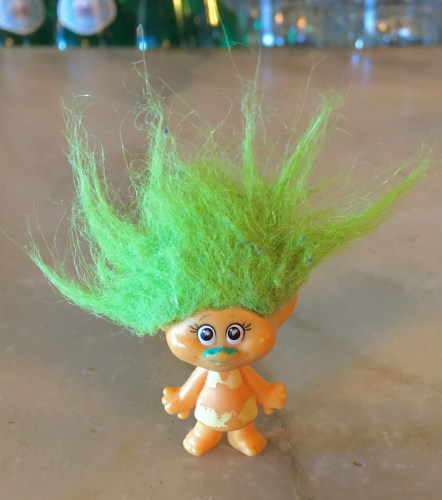 Do you like my new hairdo? Jessica at the Silly Goose did this. It’s very punk rock, don’t you think?

This is the weekend when Trolls LIVE! comes to the Cannon Center. For the first time ever, Poppy, Branch, and all your favorite trolls will perform live on stage. The journey begins when the trolls’ Hug Time is unexpectedly interrupted. This should be one of the greatest stories ever told, attracting an audience from faraway places including Paragould, Arkansas; Truman, Arkansas; and Senatobia, Mississippi.

Here’s a video of Trolls LIVE! at the Chicago Bulls halftime show.

You can purchase tickets here. There are four shows:

Tickets range from $20 to $45 for regular admission. However, if there is one time in your life when you should treat yourself and go VIP, this would be it! $90 VIP tickets get you premium orchestra seating, a VIP meet-and-greet with Poppy and Branch, a souvenir LED lanyard, and singalongs and exclusive photo-ops. A meet-and-greet with Poppy and Branch! I think I’d rather meet them than the president!

Paul just commented, “I’d rather meet the bum who chugs mouthwash from Family Dollar to get drunk than the current president.” Don’t be a party pooper, Paul.

Part of the deal I made with Paul when he allowed me to do this post is that I couldn’t just talk about myself and trolls the entire time. I had to report the rest of the Downtown news as well. So I will, although I really can’t understand why anyone would want to do anything else this weekend besides attend all four performances.

The Memphis Tigers men’s basketball team hosts #22 Houston at FedExForum at 1 PM this afternoon. The game will be nationally televised on ESPN2. Beating a ranked team would be a way the Tigers could climb back on to the NCAA bubble, especially if they beat the Cougars again on March 8.

All tight. I have an opinion and I will warn you, this is not gonna be popular. People are all over the place being armchair analysts, trying to explain why the Tigers fell out of the Top 25 and off the bubble this month. Some say it’s because James Wiseman left the program. Some say it’s because D. J. Jeffries got injured. I don’t think it’s either of those things. Take a look at the roster. Do you see what I see?

There is NOT ONE TROLL on this entire team! And people say Penny is this great recruiter. If he loaded up the roster with two or three trolls, I bet they’d be back in the Top 25 before you know it! Doesn’t the U of M have an office of diversity? They need to get all over Penny’s ass about recruiting some trolls.

Paul tells me the media reads his blog sometime. If any of you sports radio guys – Chris Vernon or Gary Parrish or whoever – want to get me on your show to discuss trolls in college basketball further, it would be my pleasure.

Paul asked me to repeat his usual advice for those going to Soup Sunday, benefiting Youth Villages, tomorrow at FedExForum. Get there early. The doors open at 11 and you want to be standing in line at 10:55. When you get inside, don’t go to the first soup table you see. Seek out the restaurants whose soups, breads, and desserts you want to try the most. By 11:20 or so the concourse will be packed with people and trolls standing in line for soup, and by noon some of the restaurants will start running out of their soups. Definitely use the holder that holds 4 cups of soup, and eat your cups of soup while standing in line for your next cups. If you wait until 12:30 you are going to be looking at slim pickins. (Not to be confused with the actor Slim Pickens. He won’t be at Soup Sunday on account of he’s dead.)

Paul mentioned yesterday that the Silly Goose will have a masquerade party to celebrate Mardi Gras tonight, and that Dylan was planning some special Cajun dishes, and that one of them would be red beans and rice. Paul and I were in there yesterday and Dylan told us it would be made with homemade alligator Andouille sausage. I also learned yesterday that you don’t cook alligators alive the way you do crawfish.

The Nevada caucuses are today. People sometimes ask me, “Perjorie, have you every thought of running for president?” There’s no doubt I’d do a great job, and I’d probably pick a human as my running mate to balance the ticket. However, there are two reasons I can’t run. For one thing, I was made in China, so I don’t meet the Constitutional residency requirement. Also, I need another 32 birthdays to hit the minimum age to be president. If I ran, though, I would be the nominee of the Green Party since that’s the color of my hair.

Puck Food Hall will have a Memphis as Puck dinner and beverage pairing Thursday, March 12. Courses will be prepared by City Block Salumeria, Wok’n in Memphis, and Sweet Magnolia Gelato. Bar 409 will pair those courses with beer by Crosstown Brewing Co. and Old Dominick cocktails. Tickets are $85. Cocktails at 7 PM with first course served at 7:30.

The Grizzlies lost to the Los Angeles Lakers last night, mainly due to the fact that Paul forgot to pull me out and stand me on the bar as he normally does during Grizzlies games. The team has two more on the road before returning home next Friday, February 28, when it will be Gospel Night. Grammy-nominated singer Kierra Sherard will perform after the Grizzlies vs. Kings game. If any of the Grizzlies’ office staff reads Paul’s blog, I have a promotional giveaway idea for next year: first 5000 fans get a troll. You could have a 7 PM tip and there would be a line of people snaked down B.B. King Blvd. all the way to Beale Street at 7 AM.

Paul thinks this is very cool: Elmwood Cemetery is opening up its massive data archives to the public. Information in more than 130,000 folders is being organized into an online database, which will be shared with the public. Paul is learning data science and he thinks this will be an interesting dataset. I started to tell him he should do a data-driven analysis to determine which troll is most popular, but what’s the point? We all know it’s me.

That’s the news. I’m off to see my peeps… I mean, my trolls. Paul will be back tomorrow with more news, unless he lets me do another post.