About 5:30 this morning I noticed the sound of tires squealing over and over again. I heard it over and over again for about ten minutes. I live near Madison and Main, and the sounds seemed to be coming from the south and possibly southeast, maybe 4 to 5 blocks away. Were people racing on Downtown’s streets in the early morning hours? I know that has happened on Riverside before, but the tire sounds didn’t seem to be coming from that direction.

I wondered if the squealing sounds would be followed by the sound of a crash or a police siren, but no. I wonder if they were racing on B.B. King Blvd. It would be a really bad move for them to cross the intersection of B.B. King and Beale, where there is often a police presence.

So here’s the deal. I couldn’t get back to sleep after that. As I type this it’s 6:42 and I don’t have much to do for the next four hours. Nor do I have enough news to occupy four hours worth of a post. So I will mix what news I do have with plenty of rambling about whatever I want to talk about.

What a joy to watch the Tigers pick up a Quadrant 1 win against a Top 25 opponent yesterday. The Tigers finally did the things Penny has been preaching all season. They were tenacious on defense. They fought for every rebound. They remembered that the shot clock has 30 seconds rather than 10 and didn’t jack up an attempted three as soon as they got down court (sometimes). They earned and deserved that win.

Does that win get the Tigers back in the NCAA conversation? Well, probably not yet, and probably they will need some help. If Memphis wins on the road at Houston on March 8, and then makes it to the AAC tournament final, and either wins the final or loses to one of the top two seeds, they’d probably be back on the bubble. Here’s what you can do to help Memphis, other than rooting for Memphis in its remaining games:

Speaking of the troll, yesterday was National Margarita Day, and she celebrated with a margarita at Bardog Tavern. 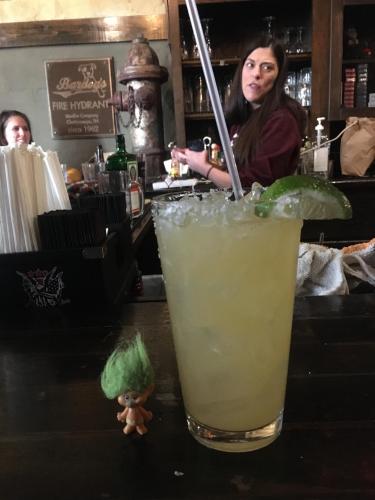 I read her post yesterday, and I have to say, she’s as opinionated as she is self-absorbed. I think one post from her a year is about enough, although since the Trolls 2 movie comes out in late 2020 I’ll probably relent and let her do one for that, too.

I woke up to a Facebook notification that an event had been added that I may be interested in. The Facebook event page said it would happen at location (A) at date (X), said that a couple of tweaks would be added this year, then directed me to a signup page which said the event would happen at locations (B) and (C) at date (Y). I hope fixing their signup page is among the tweaks. PRO TIP I’ve learned from being on a BBQ team: It’s fine to have planning meetings while you’re drinking, but hold off on the action items until the next day when you’re sober.

Another PRO TIP: If one of the organizers of said event tells you, “Best bet is to go ahead and get your entry fee in now, the spots are filling up quick,” ask them exactly how many spots are available, and how many of those spots have been filled (as in, actually paid, not just said they will pay) so far. Keep asking until you get an answer that’s not vague.

Since this is a rambling post I’m not going to do politics last today. If you don’t want to read it, scroll down to (end political stuff).

I still haven’t early voted yet. Part of the reason why is that a whole bunch of random stuff came up this week, and the days it didn’t come up, the weather wasn’t suitable for a walk over to 157 Poplar. However, part of the reason was that I hadn’t made up my mind. I went from supporting Biden to Bloomberg back to Biden to Klobuchar in the space of six days. But now, I’ve come to the conclusion that “electability” should not be my top criterion. Who knows which of these candidates is most likely to beat Mr. Tangerine Man come November?

So, after thinking about which candidate’s positions most closely align with my own, which candidate has the ability to work with Congress to get stuff done, which candidate is strong enough to stand up to Putin, and having read the transcript of last week’s debate, I have come to a conclusion.

Think how intellectually outmatched Trump would be in a debate with Elizabeth Warren. She would pick him apart. And then the next day all the media would say Trump lost to a woman in the debate (except Fox News, whose top headline will be about a pig that can roller skate). Think how much that would eat at our narcissist, sexist president.

By the way, if you are like me and have no idea who the General Sessions Court Clerk are, I got a recommendation from a friend who worked extensively with people in city government in his former job. He said there are more than one good choice, but he recommended Reginald Milton.

I knew it. I just knew it. Someone re-worded the popular Bob Dylan song into Hey! Mr. Tangerine Man. It needed to happen and it did.

This Wednesday, 117 Prime and Joe’s Liquors will team up to host a wine dinner featuring the wines of Oregon’s Illahe Vineyards. Diners will enjoy five courses by Chef Alex Switzer, each inspired by a wine from the vineyards. The dinner is Wednesday, February 26 at 117 Prime, 6:30 PM, and the price of $95.65 includes tax, tip, and online fees. There will be curbside valet service. Seating is limited.

Tickets are now on sale for individual 2020 Memphis Redbirds games. In addition, the team has announced promotions that will be ongoing throughout the season. These include

There will be bonus fireworks shows on Independence Day and Labor Day, and special brunch tickets for Easter (April 12) and Mother’s Day (May 10).

I’d like to ask everyone to extend a warm welcome to our visitors who will be in town for the Mid-South Farm and Gin Show this week. They are super nice people and I hear they are generous tippers as well.

As your number-one source of news and information about The Edge District, it’s my pleasure to inform you there’s a Mardi Gras Comes to Memphis party at Nine01IIFive04 at 676 Marshall Tuesday at 6 PM. Being from New Orleans, the owners know a little something about Mardi Gras. They’ll have king cake as well as flash sales for men and women. Can’t be there on Tuesday? They’ll take their flash sales online on their website.

National Margarita Day made me wonder if there’s a list of national food and beverage holidays. Found one. Coming up, we have

Has anyone ever learned a new skill while they dream? I’ve been able to float in my dreams, about six inches off the ground and I can even float down stairs, for about four months now. When I first had those dreams I could float for about 5 feet before touching the ground and going back up. A couple of months ago I could float for 10 feet. Now I can pretty much float as long as I want, although I still bump into objects from time to time and am still working on turning.

Water Your Dreams has a launch party Saturday, February 29 at the Silly Goose from 2-4 PM.

Moody Ques 2019 members: You should have received an email where you can pay your dues online or by check for 2020 team membership. If you didn’t get it, let us know. We are giving 2019 members until the end of March to re-claim their spots, then open it up to new members in April. If anyone out there wants to be on Downtown’s best shoulder team, let me (or whichever Moody Que you know best) know and we’ll be sure to keep you in mind when spots open up.

To celebrate Soup Sunday, here’s a pic of the Nuh-Uh Girl eating soup from 2014. 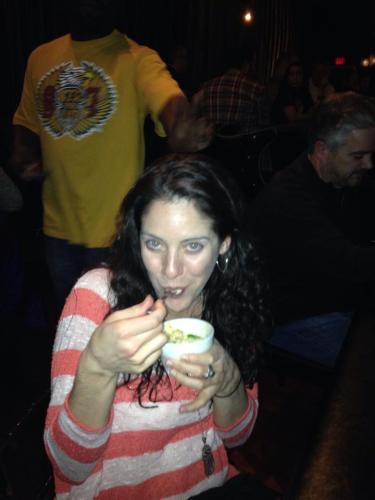 I guess that’s enough random ramblings mixed with news for now. Time for D-RANKS with B-RAD at the Goose. Back tomorrow or Tuesday with more news.