Got a meal deal for you to start off this Tuesday post. Flying Fish posted a new event to Facebook called #TakeoutTuesdays, where you can buy one entree and get a second for free, up to a $14.99 value, when you do call-in and curbside pick-up orders between 11 AM and 8 PM. There are just a few menu items that do not apply. When you’re ready to order, visit their website for details. Ignore what it says about “Texas Fish Locations Open” at the top of the page. Memphis Flying Fish info is in the list if you scroll down.

One other meal deal you can get Downtown: When you use the app to order, you can buy one footlong at Subway and get one of equal or lesser value free if you use contactless payment. There are Subways at Main and A.W. Willis, Main and Jefferson, and Second and Union.

Mississippi Terrace, a large outdoor lounge, will come to Bass Pro later this month. There will be plenty of room for social distancing, and once allowed by the Back-to-Business Framework, there will be live music and DJs.

Local businesses: The Health Department is conducting surprise visits to see if Back-to-Business Framework standards are being followed. Do not think you’re safe from these visits outside the normal 8-5 Monday-Friday business week.

Local restaurants: Menus4All is offering a free trial through September 1 where customers can scan a QR code on their phones to view your menu.

The Daily Memphian has a good piece this morning on what is happening with R, the virus’ reproduction rate, in Shelby County. For those of you who hate math, I’ll try to describe it in easy-to-understand terms:

Shelby County’s R sits at 1.14 today, a number with which health officials seem happy. It dipped below 1 in late April (why wasn’t that widely reported?) The DM article is rich with information for those who want to know about how the scientists’ models predict cases and deaths.

Late this week, medical officials will begin to have data to inform them whether Shelby County will be ready to move into Phase 2 of the re-opening plan next week.

Tin Roof will have a ’90s Day this Saturday from 11 AM to 10 PM. $5 frozen drinks, ’90s music, tables spread out among their 4 rooms so you can stay safely distanced.

The Green Beetle has announced their curbside and to-go menu for this week: 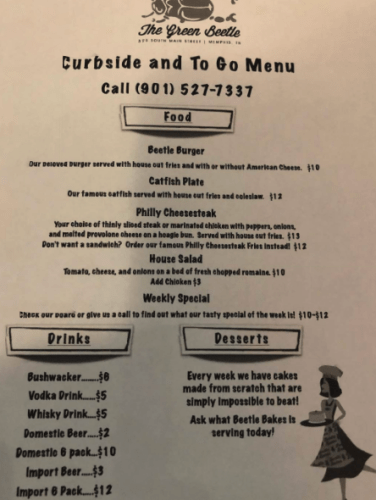 For my fellow customers at Rachel’s Salon in the Porter Building, it looks like they are choosing to play it safe and stay closed until at least Monday, May 18. When they open back up they will contact customers affected by their March 19 closing to see if they want to reschedule appointments.

Stock&Belle has a new website including a Made in Memphis section. They have locally-made face masks among their goods.

Face masks will be made available at all Memphis libraries beginning today. You don’t have to wear a mask while using the library, but the practice is encouraged.

Feast & Graze, the service that delivers hand-crafted charcuterie boards to your front door, is back in business.

There was a guy threatening people in the Downtown core yesterday. He was approximately 18, light skin, shoulder length dreads, glasses, about 5’8″, with another teenager, a few inches taller. He was driving a red mid-sized truck, possibly a Toyota Tacoma. He was screaming from his truck window and making a gun-like gesture, threatening to kill a homeless man. Later he was seen walking up the Main Street Mall with his friend, screaming that people were going to die. The Blue Suede Brigade got him outside of Aldo’s and he was later seen being loaded into about one of six police cars parked near Main and Gayoso. So he’s probably in 201 now, but he has been seen in the area before so I want to make sure my readers are aware of him.

The Flyer has results of a Greater Memphis Chamber survey of the effects of COVID-19 on local businesses.

The Little Tea Shop has a GoFundMe to help its employees with expenses during the pandemic.

The Daily Memphian reports (subscriber only link) that Grind City Brewing’s first beers will start hitting store shelves this week. The new brewery lies on the north edge of Uptown near the river.

It’s never the wrong time of year for a little truth about Tennessee Vol fans.

That’s it for now! Back later today or tomorrow.