Most likely we will have a decision on whether to enter Phase 2 of the city’s Back to Business Framework on Monday. Dr. Alisa Haushalter, Shelby County Health Department director, said in Friday’s daily COVID-19 press conference that Monday would likely be the day, and Mayor Strickland echoed that notion in his weekly e-newsletter.

Hair salons and barber shops were in the “close-contact businesses” list allowed to open in Phase 2 originally. However, as hair salons and nail salons opened earlier in surrounding counties, pressure from owners forced Shelby County’s COVID-19 task force to move them into Phase 1.

What needs to happen to allow the move into Phase 2?

Dr. Haushalter has stressed all week long in her press conference that there are four main factors:

A favor to ask of my readers…

… particularly my readers who like to, for lack of a better term, “hang out.”

Mayor Strickland mentioned earlier this week, and city COO Doug McGowen touched on this point again Friday, that citizen complaints regarding Back-to-Business violations would be taken into account when they consider when to move to Phase 2 and what adjustments (any additional tightening or loosening) would need to be done.

Remember grade school, when the teacher stepped out of the classroom for a few minutes, and when she returned, there was that one kid who handed her a list of who had been talking?

Ever wonder what that kid is up to these days?

That kid, now grown up, thinks we entered Phase 1 WAY TOO EARLY and that we should have been quarantined for at least an additional month. That kid is horrified that not only are we re-opening, but we’re already about to enter the second phase.

That kid is going to be out this weekend, taking photos of people congregating together in groups, not observing social distancing, not wearing masks, not taking Back-to-Business seriously, and will then email the photos to the city’s complaint email address.

If you hang out with friends this weekend, can you congregate in small groups, rather than large ones?

Can you try the best you can to stay 6 feet away from people who aren’t in your household, and avoid hugs and handshakes for now?

If you go to a restaurant, can you avoid lingering at the bar area – especially if the bar area is visible from the outside?

And I know I’m beating a dead horse with many of you – but would you consider wearing a mask or face covering if you have one? County health officials really, really like to see them. If you won’t do it to help prevent people from getting sick, will you at least do it so they’ll put the basketball hoops back up at city parks?

The news caused me to utter the name of a Chinese man.

That is absolutely, completely irresponsible. Most of you have figured out that I lean a little bit more in the direction of re-opening than the average Memphian, but you just can’t take all the controls off. Way too much, way too soon.

I get that Republicans hate government restrictions. Lee and his advisors probably have the mindset that it should be the individual restaurants’ and attractions’ responsibilities to come up with their own policies to prevent the spread of COVID-19, rather than the government’s.

The problem is that this sends the public the message, “things are back to normal now.” That will cause a massive surge in coronavirus cases beginning around the fifth of June. Hospitals will be overwhelmed. People will die because they couldn’t get an ICU bed or ventilator.

The good news for us here in Memphis is, Shelby County is not included in the governor’s order. Since we have our own health department, Gov. Lee has given the county autonomy to re-open at its own pace. Hopefully the local COVID-19 task force will hold its ground and adhere to the Back-to-Business Framework.

But look how the task force was pressured to move hair salons into Phase 1. Not only were they being pressured by salon owners, but they were probably pressured by the state not to deviate too much from its directives. Will Strickland, Harris, and Haushalter find themselves under the same pressure again?

On to the news…

I ran into a friend yesterday and he gave me a couple of pieces of Downtown restaurant good news. First of all, the spot at 51 S. Main, most recently DejaVu, will be a New Orleans-style eatery called Beignet. Significant money has been pumped into remodeling that place and they will be open for lunch and dinner.

His restaurant group is also taking over Carolina Watershed, and it’s possible both places will open the same day. It’s hard to estimate an opening date when a pandemic is going on, but he seemed to think around four weeks.

Online ordering is now available at all Huey’s locations. I am so happy they did this. A few days ago I called and tried to place a to-go order, but I was in such a noisy environment that I couldn’t hear my phone. I so much prefer to do my food ordering online. Thanks Huey’s and you’ll see an order for a Texas Toast Burger, medium, fries, ranch instead of ketchup on the Downtown location’s screen soon!

The Flying Saucer has a deal going on right now: Buy a $125 e-gift card for $100. That’ll get you started toward your next plate on the ceiling! Allow an hour or two after purchase for your e-card to be emailed to you.

COVID-19 news you can use: A professor explains how a fart can get through jeans and underwear but a mask can stop the coronavirus

Mike Ceide from WREG reports that the Grizzlies re-opened their practice facilities for voluntary player workouts… wait for it… with restrictions.

Memorial Day weekend is coming up next weekend. Local catering company A Moveable Feast is offering a complete Memorial Day cookout that feeds 4, delivered to your door next Saturday. The meal includes

Here is a photo of the man suspected to have taken the bike belonging to Bill, co-owner of River Time Market and Deli, about 1:10 PM Thursday. The bike was locked up near Court Square. 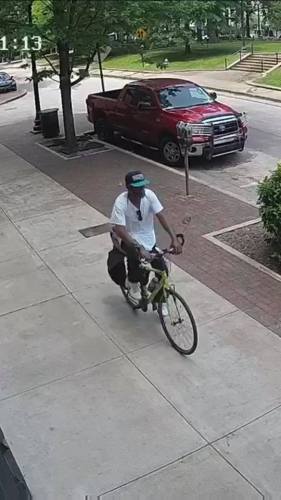 The Daily Memphian has a look at what to expect at the Memphis Farmers Market today. Quick summary: Don’t go if you feel sick, bring both cash and credit cards, leave your pet at home, and be prepared to stand outside in rain waiting to get in the Market, which is under a pavilion. The Market is open until 1 PM today.

There’s a Goth Happy Hour on Twitch tonight from 7 to 9. DJ Alpha Heather will play the tunes.

Time to stand on X’s taped six feet apart on a floor to start off a day that’s all that and a bag of chips. Back tomorrow with more news.