Mayor Strickland and Police Director Rallings called a special news conference yesterday afternoon. Because the protests turned violent Sunday night, requiring the use of tear gas, and because there was property damage, Strickland is imposing a 10 PM to 6 AM curfew nightly until further notice. “If you’re out during that time, you can be arrested,” the mayor said.

On my block of Main, the windows of Flight, Walgreens, and Winfield’s (a minority-owned clothing store) were broken out.

The curfew will surely continue at least as long as the nightly protests do. Frank Gottie, one of the organizers of the protests, is that the plan is for them to continue until the three other Minneapolis PD officers in the murder of George Floyd are arrested.

Keep in mind that the curfew does not mean that bars and restaurants will close at 10. The people who work there have to be at home themselves by that hour.

I was in both the Silly Goose and the Blind Bear yesterday, and both of them had a plan to close their kitchens at 8, do a hard last call at 8:30, and have everyone out and the doors locked by 9.

I’ve seen some restaurants that have announced last delivery  orders taken at 7:00 and last seating for dine-in at 7:30 so that they have time to close up shop and get home before the curfew.

Also, patio dining may not be available for a while. Let me explain why…

Early yesterday afternoon, I was sitting at the Silly Goose watching a video activist Hunter Demster had been sent. The person who shot the video said that bricks and concrete slabs were being placed near Downtown businesses, so that people would have convenient weapons to throw through businesses’ windows.

About an hour after that, a car pulled up outside the Silly Goose and a woman came in, very agitated. She repeated the story about bricks being left for use as weapons, and that she and her group were sweeping the area and had found a few left outside and wanted to warn the owner.

Important point here… SHE DIDN’T BRING ONE OF THE BRICKS IN TO SHOW US. That makes me wonder if this was part of a disinformation campaign. However, it concerned management to the point that they moved all the patio furniture inside, and other bar and restaurant owners were texted about the threat and some did the same.

On to the news…

The Blind Bear brought trivia back last week, and it was a complete success, with people remaining socially distanced while having one of their normal weekly activities back. However, trivia start time has traditionally been 7:30, which won’t work if they need to have everyone out at 9. This is not set in stone yet, but Jeannette is considering the idea of moving start time back to 6:00 this Wednesday.

The Blind Bear is getting a 16-foot shuffleboard table. One of the poker tables will have to go to make room, but booths will be added to make up the seating space.

Happy Mexican posted that they are re-opening their Downtown location for dine-in today.

The interior of Royal Furniture is getting cleaned out in preparation for its conversion to a hotel. Even the bedroom set that lights up is gone. 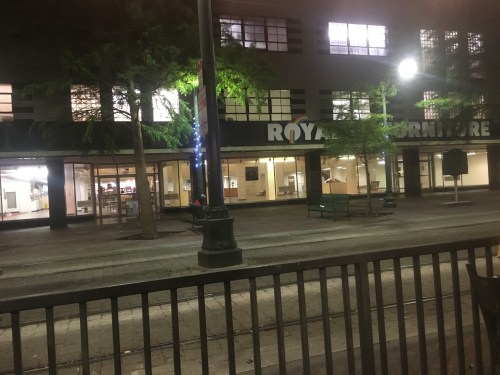 Puck Food Hall will celebrate its one-year anniversary with a cookout on its newly upgraded patio Saturday, June 6 from 2 to 8 PM. Come socially distance while enjoying burgers and sausages with fries. All their vendors plan to be open regular hours Saturday, although I suspect the curfew may affect that a bit.

BBQ egg rolls have returned to the menu at Kooky Canuck.

Things are getting back closer to normal at Ghost River Brewing Co., and they’re expanding their hours:

The new hours were posted about an hour before the curfew was announced, so the 9 PM closing times may possibly be adjusted to give taproom employees time to get home.

The June 14 River Rat Rounders poker fundraiser for Alive Memphis, scheduled to be held at the Green Beetle, was canceled.

The latest business to fall to the coronavirus is Binghampton’s Caritas Village. The dining and meeting space isn’t closed for good, but will be at least for the summer.

Want to know what it’s like to get tested for COVID-19? Read an account from The Daily Memphian’s Jennifer Biggs. She said it couldn’t have been easier.

Cheers to the Memphis Grizzlies for giving employees paid time off to vote.

Trump wins Ohio and Iowa, which are really more reliably red than they are swing states now.

Biden wins Pennsylvania, where RealClearPolitics has him up 6.5%, nearly enough to declare PA “leaning Biden” as opposed to “toss-up.”

Biden wins Michigan, which seems very possible given Trump is doing everything he can to look like a raving lunatic in that state.

However, Trump hangs on to win Arizona, a state many thought would flip blue this year. Trump also wins swing states Florida, North Carolina, and Wisconsin.

That would give us this map. 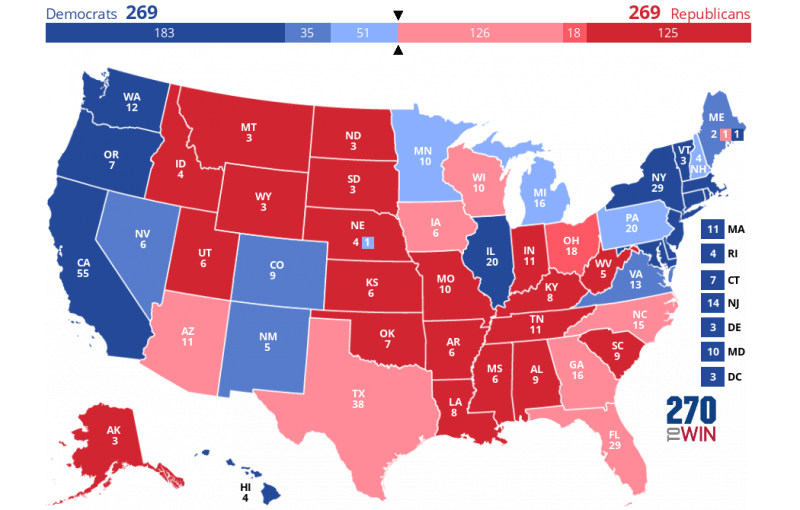 Click the map to create your own at 270toWin.com

An Electoral College tie would throw the election to the House of Representatives, with each state delegation receiving one vote, 26 needed to win. At this point it wouldn’t matter who won the election – the opposing party would spend the next four years claiming we have a president who wasn’t elected by the people. If this map is the one we get, we might be better off saying this “America” experiment was fun for most of the 244 years it lasted, and asking the Queen if she’d like her 13 colonies back and 37 additional ones.

Some of the chants from the protest last night

“I’ve got my hands above my head!”
“Please don’t shoot me dead!”

Apologies for no post yesterday. It just felt appropriate to take a day off.