In the COVID-19 task force press conference yesterday, Shelby County Mayor Lee Harris said that the task force is considering restrictions on social gathering locations such as bars. You know, Sunday I praised Bardog for their precautions, and I realized I missed a big one: That PLEASE WAIT TO BE SEATED sign at the door. It gives them control over where people go in their establishment. With that measure in place, you don’t get groups of eight to ten people walking right in, maskless, and walking right up to the bar and crowding those who are sitting there, properly socially distanced, following the rules. Perhaps a solution which would allow bars to remain open during Phase 2 is to require all bars to have a doorman during all of the operating hours. Yes, that would put an additional person on the payroll, but it’s less expensive than closing down!

You know, the thing about bars is, EVERYBODY who comes there thinks THEY are the VIP. They take the mindset of. “Yeah, there are rules, but I know people here, so…” There are no VIPs during a pandemic. If you go to a bar, put your mask on before you enter. Sit six feet away from people not in your group. If all the bar stools and all the tables are full, and you are told there is nowhere to seat you, leave. Don’t argue. Don’t put the employees in the very uncomfortable position of playing bad cop.

Restaurant news: The Tennessee Brewery announced yesterday that By The Brewery (@bythebrewery) will open in the brewery’s own tap room, serving breakfast, brunch, and lunch.

This video is worth watching: A brawl over social distancing broke out at Little Rock restaurant Saltgrass Steak House.

Outdoor dining seating has been set up on the block of Main between Gayoso and Peabody Place. 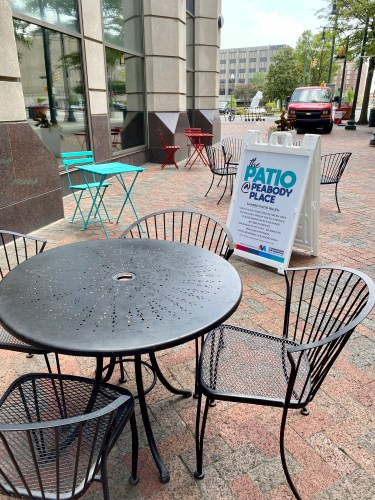 These seats let you enjoy a meal outdoors from one of the many restaurants nearby. This will be especially good for patrons of Margie’s 901 ice cream whop, which does not have any seating.

Could the National Ornamental Metal Museum leave Downtown? The museum has received a recommendation as the new tenant for Rust Hall, the building in Overton Park recently vacated by Memphis College of Art.

Holly from the I Love Memphis Blog has lots of information about the Quintessential Summer Celebration on the river happening today through Sunday.

The city unveiled its Reimagining the Memphis Police Department website yesterday. You can file a complaint, learn about measures they have adopted, see demographic data, and apply to be on CLERB (Citizen Law Enforcement Review Board).

Flight restaurant issued an apology yesterday after accusations of racism.

This is a long article but it is very insightful: How dollar stores became magnets for crime and killing

Loflin Yard will start doing Fido Fridays this Friday 4-7 PM. Bring your dog and get 2 for 1 happy hour.

As your number-one source of news and information about The Edge District, it is my duty to inform you that Chef Tam’s Underground Cafe has decided to revert to to-go only, citing rising COVID-19 numbers.

Celtic Woman – the 15th Anniversary Tour has been announced for the Orpheum Sunday, Aprul 25, 2021.

I hope none of you have a trip to he Big Apple planned, because Tennessee has landed on New York’s list of states requiring a 14-day isolation period if you travel there.

River Time Market & Deli will be closed this Friday-Sunday for the holiday. Monday they will reopen with new hours of 11 AM to 7 PM. These will be temporary hours Monday-Friday.

You know what I said about there being no VIPs during a pandemic? I take that back. Health care workers are the VIPs.