STIX, the Asian, sushi, and hibachi restaurant opened in Peabody Place this week, and with nothing else to do, I decided to try take-out lunch there. They had two sushirritos on the menu, and I ordered one, the Grizz Burrito. It consists of spicy tuna, shrimp tempura, cucumber, crab, masago, spicy mayo and sweet soy wrapped in rice and soy paper. 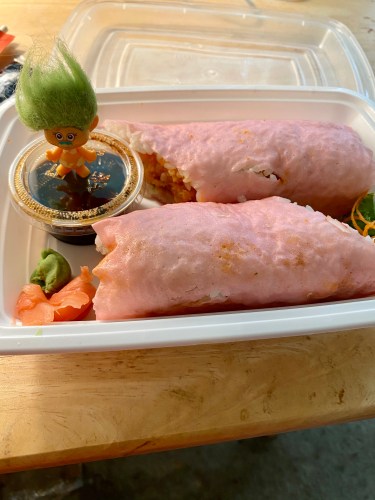 One thing I will tell you: Your burrito won’t hold its shape for long! By 5 bites into each half of the burrito, it had totally fallen apart and I had to get out the fork. Also, the one paper napkin they give you in the to-go utensil pack is not going to be enough. Better have some extras standing by. They gave me chopsticks and 5 packets of soy sauce as well, which I didn’t attempt to use.

Despite being messy, the burrito was delicious and they used quality ingredients. I would get it again, although I may work my way through some of the other menu options before I come back to it.

The documentary on The Little Tea Shop premieres tonight at 7:30 on WKNO. You can join a live chat with owner Suhair Lauck tonight at 8.

The Memphis Tigers football program suffered a blow yesterday. The Big 10 announced they are going to play in-conference games only. The Tigers had a road trip to Purdue scheduled for the second week of the season. Not only will the Tigers lose a $750,000 appearance fee, but it will be harder for Memphis to get back to a New Year’s Six bowl without a win over a Power 5 opponent.

Last week I posted an article about the ghost kitchen future of restaurants. Well, Jennifer Chandler, food writer from the Commercial Appeal, posted that she tried delicious fare from an upcoming ghost restaurant called Cocozza. From the photo of the menu she posted, it appears to be an Italian restaurant, and it will be operated by none other than Patrick & Deni Reilly of the Majestic Grille. Chandler said she would have a story about the place next week, so keep an eye on her column on the CA’s website.

Congratulations to the Crowne Plaza Hotel in the Pinch District, which was recently named by travel agents as one of the 12 cleanest hotels in the world in a Reader’s Digest article.

Fruit flies are out of control everywhere this summer, and a neighbor of mine gave me a tip last night: Use a mixture that is about 4 parts apple cider vinegar and 1 part dishwashing detergent as a trap.

Yesterday’s COVID-19 task force press conference provided a clearer understanding of the serious situation Shelby County is currently in. Testing capacity is becoming strained. Lab reports are not coming back as quickly as they were a month ago. Contact tracing is harder to do now that the average number of cases is around 300 a day.

Here’s a scary statistic: This tool predicts that if 10 people gather at an event in Shelby County, there’s a 36% chance someone there will have COVID-19. Gather 25 people in the county and there’s a 66% chance someone will have the virus. Go up to 50 people and it becomes 88%, and go up to 100% and we’re at greater than 99%. In that light it becomes more clear why they closed the bars. (hat tip to the Daily Memphian for providing a link to the tool)

Health department director Dr. Haushalter said there have been reports of people who have tested positive for COVID-19, and then attended parties or events knowing they were infected. Other people at these events went on to get infected as well. It sounds unbelievable that anyone would care that little for other human lives, but then again I have met a few people in my lifetime who are that evil.

They opened it up to questions, and Omer Yusuf, the Daily Memphian reporter who usually covers the press conferences, had questions. However, yesterday’s conference was unusual in that the DM sent a second reporter: food writer Jennifer Biggs. Biggs had previously published a list of limited-service restaurants that will be required to close. She asked Haushalter if venues that are licensed as full-service restaurants, but essentially operate at bars, will be looked into by the health department and Haushalter said yes. Then Biggs asked about bars licensed for beer only, and therefore would not be on any list provided by the state. Haushalter said the health department has lists of those places too, and they will make sure those places do indeed close.

Despite being a full-service restaurant and therefore technically allowed to remain open, Bardog Tavern is reverting to take-out only. Their temporary hours are 11 AM to 10 PM and you can call 901-275-8752 to order some of Grandma’s famous meatballs, the Amazing Island Club, the sliders or any of Bardog’s other excellent menu items. With the closure of indoor dining, neither the Health Department nor the Daily Memphian will need to send spies out to ensure that nobody is having any fun at the neighborhood tavern.

Max’s Sports Bar can’t serve people inside under the new directive, but they will still sell to-go food and drinks out of their limited service restaurant window next to the front door.

RiverArtsFest is the latest festival to cancel for 2020.

In yesterday’s press conference, Dr. Haushalter said once again that once the Health Department officials see more people wearing masks, they will be able to ease restrictions on limited service restaurant closings and restaurant closing times. So please, please, please WEAR A MASK any time you are out in public! It will get good people back to work.