I know some of you are concerned with how I’m holding up without access to my holy trio of Bardog Tavern, Silly Goose, and Blind Bear. Let’s have a look at how yesterday evening went: 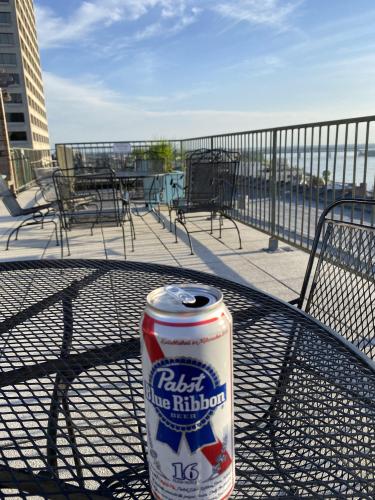 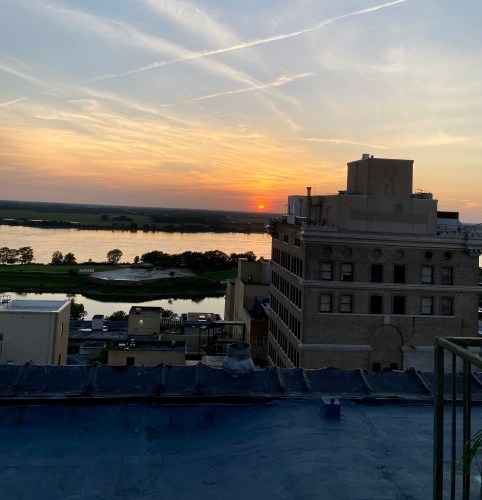 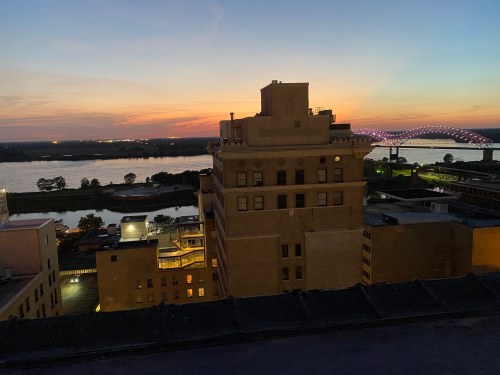 Ummm yeah I think I’m going to be OK.

You know, the beginnings of my current group of friends that I run around with began on the very same rooftop back in 2005. There was a chef in the building at the time who had a family for 4 and cooked for 15 on the rooftop grills, and we’d bring him wine and eat gourmet dinners. That fall, as it started to get too cool to be on the roof, we started a trivia team at the Flying Saucer. A poker game in early ’06 united the rooftop gang and the Sleep Out Louie’s gang. Later that year one of the guys told me he was thinking about starting a BBQ team at Memphis in May and asked if I’d be interested in joining… and the rest was history.

Nowadays, I know maybe 10 to 15 of my current neighbors (in a building with 112 units), and I look forward to increasing that number while the limited service restaurants are unfortunately closed. The rooftop is outdoors, where the virus is one-nineteenth as likely to spread, and there’s plenty of room up there to social distance.

The folks at Alchemy have decided not to remain open in defiance of the health directive closing limited service restaurants. The Health Department paid them a visit and threatened them with a $1500 fine and the loss of a liquor license.

I think Alchemy’s new strategy is smart. I mean, say a cop pulls you over on a bullshit charge. What do you do? You say “Yes. sir” and “No, sir.” You comply. You submit to authority. You cause the officer as little trouble as possible in order to escape the immediate situation.

But escaping the immediate situation doesn’t mean you’re done. I suspect Alchemy isn’t done. I suspect a number of limited service restaurants that have meekly submitted to the Health Department’s authority aren’t done.

The Memphis Flyer’s Hungry Memphis blog has the scoop on Cocozza, the pop-up/ghost restaurant that will temporarily operate at the Majestic Grille. The place will serve up Italian recipes that feel like they were made at home, and you can take them back to your couch or dine on the Majestic’s patio.

The 117 Prime food truck will be at Crosstown Brewing Co. today from 11 to 5. Try one of those Dog Days pink lemonade shandys with your food. They’re good!

The Masonic lodge building at 154 G.E. Patterson is for sale. If you’ve got a cool mil-six it could be yours. You’d have a short walk to Central BBQ, as well as to The Vault where my friend Chef Steph occasionally runs RAWK’n Grub burgers as specials. You’d also have a short walk to get to-go drinks from the limited service restaurant window at Max’s Sports Bar. Just be careful not to socialize with anyone while picking up your order. Socializing plus alcohol is the life of the DEVIL!!! Just ask the Health Department, or Nancy from Facebook.

I’m surprised the “we should have stayed in lockdown until August” crowd on Facebook and Twitter isn’t pushing for a return to Prohibition until the pandemic is over. It is the Roaring Twenties once again, after all. Hey, then the Blind Bear truly would be a speakeasy!

Here’s a good read: 2020 is a tipping point for college football. The pandemic and the protests are bringing to light underlying injustices in football programs: profiting off unpaid athletes, institutional racism, and failing to properly protect athletes’ health. I’ll share a few facts from the article:

Three University of Memphis basketball players and one basketball staff member tested positive for COVID-19 after returning to campus last month. That kind of stuff is going to happen. How do you tell a 19-year-old not to go out and meet members of the opposite sex (or the same sex, if that’s what they prefer) and socialize and hook up?

… but, kids, there’s so much you can do besides having sex! You can host a virtual dance party, you can have an online game night, you can take YouTube lessons on how to draw Big Bird and then compare your drawings in a Zoom session, you can livestream a Nickelback concert, you can… all right, I’ll shut up now.

If you missed the documentary on The Little Tea Shop last night, you have two more chances to watch:

One of the managers of Loflin Yard contacted me to let me know they are open, outdoor seating only, socially distanced, until 10 PM. I may go check that out sometime today. Not a big fan of 101 heat index, but I’m even less of a fan of being bored.

Blind Mississippi Morris plays Blues City Cafe today at 5. There’s a slight chance you’ll be exposed to COVID-19 if you attend a live music event, but it’s OK because you’ll be on Beale Street and the city’s entertainment district needs to make money.

Bass Pro at the Pyramid is hiring for dozens of positions.

Most of you won’t care, but I’m a former math teacher so I’m linking anyway: A mathematician has created a method that proves there’s no such thing as a bad math student

This will be useful to many of you this summer: How to tell the difference between a fruit fly and a gnat. My neighbor’s tip for trapping gnats – a mixture of 4 parts apple cider vinegar to 1 part dish soap – works astonishingly well. Some of the limited service restaurants I (used to) go to have had problems with fruit flies. They might want to give this a try when they get back open. Trouble is, it probably wouldn’t be very appealing to customers to have a bowl of dead fruit flies sitting next to the garnishes.

All right, time to wrap up with the usual reminders: