Today is the day when the Memphis Tigers can claw their way into the NCAA tournament’s field of 68. They travel to Houston this morning to play the nationally-ranked Cougars at 11 AM on CBS. The bracketologists had Houston projected as a 2 seed yesterday, so knocking them off would be a huge bullet point on Memphis’ resume.

If a short walk to Pontotoc Lounge, soon to reopen, sounds good to you, there’s a condo for sale next door.

James Aycock has good news in his COVID week in review report on Twitter this week. The positivity rate has dipped below the 5% long-term goal, and the number of new cases per day is inching closer to the goal of 10 per 100,000 in Shelby County. The positivity rate is the lowest we’ve seen since Phase 1 of reopening back in May.

We still need to keep our mask mandate on the books, but we really need to start painting a vision of #VaccinationLife, both to inform people and push vax demand.

Right now, supply is the problem, but within 2mo, the problem will be demand. Let’s be proactive.

I heard from an inside source yesterday that shuffleboard bar Longshot in the basement of the Arrive Hotel could reopen in April.

The Dirty Crow Inn will have their bacon-wrapped shrimp at their pop-up at the 40et8 on Legion Rd. in West Memphis today. They’ll also debut two new flavors of wings: Just Dew Me, and Buffalo Garlic Parmigiana.

Not real happy with Facebook right now. Their Events > Discover > Today filter was one of the ways I found things to write about, but they seem to have eliminated it. Why in the world would someone purposely make a website less user-friendly?

Also, if anyone from Choose901 reads this: Time to update your events page. February is over.

I had a yummy brunch yesterday! 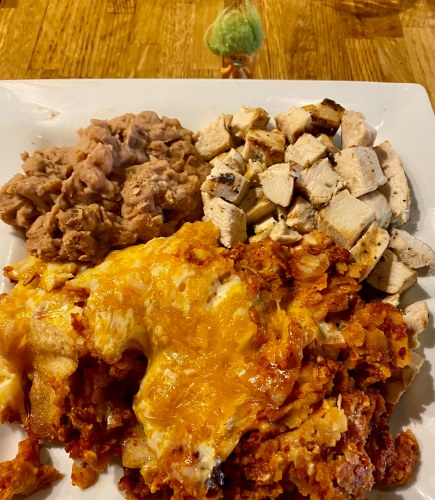 Chef Hector put chilaquiles on the special board yesterday at Bardog. The dish is sort of a Mexican breakfast nachos, with fried soft corn tortillas, salsa, cheese, refried beans, and chicken. The tortillas normally come topped with an egg, any style, but I’m not a huge fan of eggs so I asked that it be left off. Perjorie T. Roll, who likes being known as la perjorista when eating Mexican food, thought the dish was “Bueno.”

We also had an order of house-made chicharones, or pork rinds: 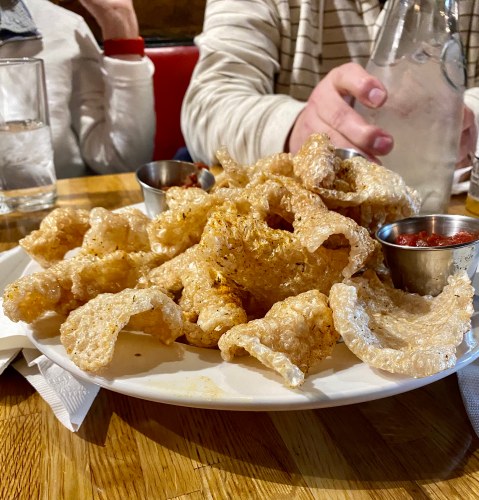 Checks are on the way! In a late-night session, the Senate passed a COVID relief bill. If you make less than $80,000 a year, $1400 will show up in your mailbox or bank account soon.

A name to learn if you don’t know it already: Joe Manchin. He is a senator from good ole West Virginny and probably the most conservative of the Democratic senators. In a Senate where the Democrats hold a 50+VP/50 majority, that matters a lot. Manchin has the power to derail legislation or get it rewritten to his liking, and that’s what happened with the COVID bill.

In other political news, the Trumpster sent a cease-and-desist letter to the three top national Republican fundraising organizations demanding that they remove his name and likeness from their advertising. Trump was mad that his name was being used to raise money for Republicans who voted to impeach or convict him. There is no limit to the pettiness of this man. You know, I predicted earlier this year that Trump would pass away before calendar 2021 is up. Now I kinda hope he lives to be 100 so Republicans will have to deal with his tumultuous presence for a long, long time.

Time to get the day started! I have 5 ideas for articles to write on Medium this week, and I may try to get them all written today. Thanks to my article that went viral, I’ve already earned as much on Medium through March 6 as I earned in the entire month of January, when I published something all 31 days of the month.

As my bank balance goes up (thanks Medium! and Biden!), the temperature gets warmer, and the COVID restrictions loosen, I plan to ramp up my going-out a bit more. Hopefully I’ll hear more juicy news tidbits to report in this blog. Back tomorrow with more news. Go Tigers!