I stopped by the opening day of Memphis Farmers Market yesterday. I took a notebook with me so I could jot down changes since last year – or, really, since the Market I remember in 2019, because I only went once last year.

All right, I gotta call somebody out, and I hate doing this. I walked down to the Market at 10:40 and Earnestine & Hazel’s had their doors open. “Cool, they opened early, I’ll check them out after the Market!” I thought. I stayed at the Market until a minute or two past 11, catching up with friends I hadn’t seen in a while.

Then I walked over to E&H. I noticed one of the doors was propped open by a chalkboard that said, “We’re OPEN!”

However, when I walked in, one of the guys behind the bar told me they planned to open around noon. Needless to say, I was rather disappointed.

If you can’t do it at the posted time, don’t open the doors and make it look like you’re open. That is negative marketing.

And if you do open the doors, don’t prop them open with a “We’re OPEN!” sign when you’re not actually open, for heaven’s sake!!!

Granted, we are in the middle of a pandemic, and E&H under the current ownership has been open for less than a month. So let’s cut ’em some slack. You never know what could have come up. Maybe they had trouble finding employees who want to work, which is a challenge for every restaurant in town these days. Maybe they’re still learning to operate the Soul Burger equipment and got a bit behind schedule. No big deal.

I had a good time catching up with my BBQ teammate Joan, and she asked if I planned to go down to BBQ Fest this year, given that our own team isn’t competing. I said I hadn’t thought about it, that I wasn’t sure which teams were competing. Joan told me that Memphis in May has a list on their website.

The National Civil Rights Museum will host a virtual commemoration of the 53rd anniversary of the assassination of Dr. Martin Luther King, Jr. tonight at 5 PM Central time online. Featured in the commemoration will be

I found out that the anniversary is part of the reason I have a 4-day weekend, so I will honor Dr. King by reading one of his speeches/sermons. Here’s a complete list if you want to do the same. Hmmm… I think I may read his speech “The Other America,” first delivered April 14, 1967 at Stanford and last delivered March 14, 1968 at Grosse Pointe, Michigan, to see how his views changed over the final year of his life.

Here’s a link to James Aycock’s COVID Week-in-Review for the week that just concluded. 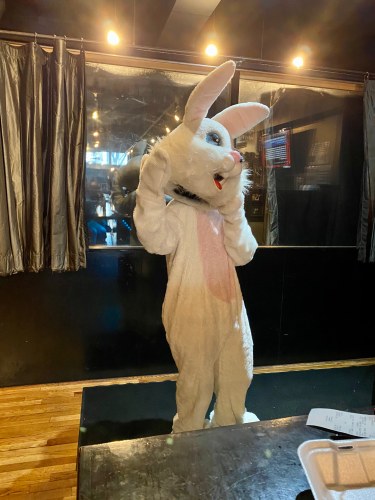 Speaking of Easter, don’t forget: The Peeps go on sale at 50% off at grocery stores and drugstores tomorrow morning.

Daaaaamn the top post on Nextdoor this morning is “Can we address how bad things have gotten at (2 restaurants).” I don’t frequent either of the restaurants (a bit far of a walk) but I sure do hate to hear they’re having problems. Once again, most restaurants Downtown are having trouble keeping adequately staffed. A server or bartender who makes tips can out-earn what they’d get on unemployment, but a cook or dishwasher in many cases cannot.

Today is not only Easter but a day of many other celebrations as well. It’s 404 Day, a celebration of the error you get when you request a web page and it’s not found.

It’s also National Cordon Bleu Day. The only place I can think of Downtown where you can get that dish is occasionally Hector puts Cordon Bleu sliders on special at Bardog.

And if you really want to live on the edge a bit, it’s National Tell a Lie Day. Of course, for some people, that’s every day. Every hour, pretty much.

There was an apartment fire in a vacant apartment in the 200 block of E. Butler yesterday. Arson is suspected.

The folks at The Dirty Crow Inn announced that their pop-up restaurant has ended at the 40et8 in West Memphis. Not to worry, they tell us, the Crow will fly again when the time is right.

The MemphisWeather.net forecast for Easter looks outstanding: Sunny and 71 today, clear and 50 tonight.

Yoga on the River has a new instructor, Candace from Yoga Kickback. Catch her free class at 5:30 every Tuesday at River Garden Park at 51 N. Riverside Drive or join virtually on Instagram Live. You’ll want to bring a mat, a towel, and water. This is an all-levels class. YOGA!

That’s it for today. Happy Easter to those who celebrate it. Back tomorrow with more news.