I’m going to start off this post with something I don’t think I’ve ever done before: a soup recommendation!

Red pozole, a traditional Mexican soup, has been on Bardog’s special board for about a week now. Yesterday curiosity got to me and I ordered a cup. 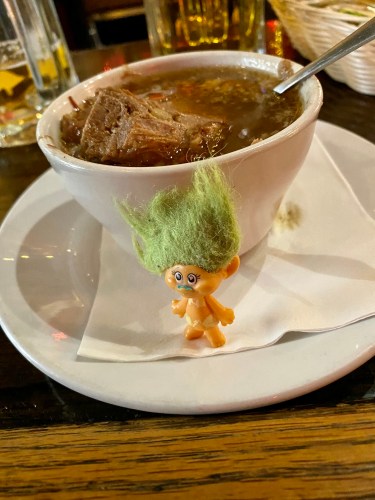 OMG it was this huge hunk of flavorful pork in a red broth. There was so much pork in that little cup that I thought for a minute I was at BBQ Fest. Is there an ancillary competition for soup?

It’ll probably roll off the special board soon, so if you want to try it, I recommend going by Bardog today. If this were a permanent menu item, I’d email Jennifer Biggs of the Daily Memphian and recommend it for an “under $10 deal” food column.

WTF… Rice, traditionally the worst program in D-1 college football, made it to a bowl this year? They’re usually so bad that even Vanderbilt could beat them. They play Southern Miss in the LendingTree Bowl on December 17.

The projection held up and it’s Arkansas vs. Kansas in the Liberty Bowl at 5:30 on Wednesday, December 28. As I said yesterday, no fan base travels better than the Hogs. And Kansas is a huge party school, from what I’ve heard. That week is going to be a blast.

As for Memphis, they’re headed to the First Responder Bowl in Dallas on December 27. Their opponents will be the Aggies of Utah State.

If you’re looking to stay out late while Santa visits your house on Christmas Eve night, the Blind Bear has plans for you. It’ll be DJ Tree’s birthday party with Mylon, dudecalledrob, Saint, and Taz. 10 PM to 2 AM.

There was an unwanted musical performance at Blind Bear this past Saturday. Nate sang an entire One Direction song at the bar. “That was as loud as it was terrible,” I told Nate.

The Trumpster wants to end parts of the Constitution. This is some Josef Stalin-level shit, y’all.

I really enjoyed brunch at Bardog yesterday. I haven’t done an extended stay there on a Sunday in a while. It’s the one place left Downtown where the Sunday brunch crowd still feels like family. Every other place since the pandemic, the crowd has become so random. Too much of a restaurant crowd and not enough of a bar crowd.

It’s a foggy Monday. I just looked out of my living room window and I can’t see the I-55, Big River Crossing, and Frisco bridges.

I guess that’ll do it. Back tomorrow if I can scrounge up any news to report.