Thanks to Rachel, who writes A Pulp Faction, one of the best Memphis blogs, for sending this info: a pulp faction: Tuesday: Memphis Roller Derby Practice and Meeting

Back in the ’80s I used to watch roller derby on TV. For those of you not familiar with it, it’s a physical-contact sport on a round skating rink. I don’t know if this is true of the local team, but the roller derby I saw on TV had some of the sports-entertainment aspects found in pro wrestling, with babyface and heel teams and evil managers.

My vacation is going very well for the most part… I’ll be out somewhere laptopping this afternoon, making updates to a website. I may very well jump over to Blogger and post a Tuesday update at some point.

Just checked my tracker. Someone from Disney is reading my blog. Cool!

Pic from Saturday when the snow was fresh – this is of Court Square, taken from my rooftop on No. 10 Main. Click on the image to see it in full size. Warning to dialup users: this file is almost a megabyte, may take a moment to download. Shouldn’t be a problem for cable, DSL or wireless users. I didn’t want to resize this one (2560 x 1920) and lose any detail. 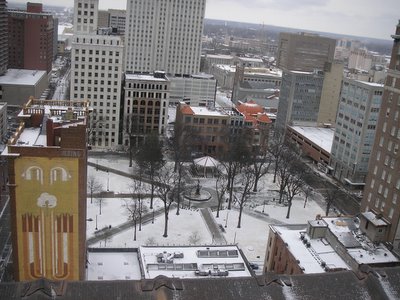 Snow is pretty rare in Memphis, so this pic is a keeper. You’ll notice that there is something else rare about this pic of Court Square: there aren’t any pigeons or bums.

Continuing my “Deal of the Week” series, in which I scour the ads in the Sunday paper to find the best deals…

This week’s Deal of the Week is the Microsoft Wireless Optical Desktop 5000, a wireless keyboard and mouse combo. It normally runs for $99.95 but Office Depot has it on sale this week for $49.95 ($59.95 plus $10 mail-in rebate). It’s a good opportunity to eliminate some wires from your desktop, and users seem to especially like the feel of the mouse in their hand. It also provides one-touch access to photo-editing and screen magnifying features.

The Microsoft Wireless Laser Desktop 6000 is also on sale for $49.95, but reviews on the Web seem to indicate that the Optical Desktop 5000 is better put together and a more comfortable product to use.

One word of caution: Other devices that emit electrical current can interfere with the wireless signal. My manager at work has a wireless keyboard/mouse, and sometimes his telephone cord gets in the way and knocks the signal out. So if your wireless keyboard suddenly stops working, it’s not necessarily a sign that it’s defective; you may just need to move some things around on your desk.

Back next Sunday with another deal.

Due to the wishes of one of the people at the party, I’m not going to post the images from last night. My apologies for leading everyone on, but it’s important to respect people’s wishes. To the person in question: No hard feelings and we would still love to have you guys join us for trivia night or some other night sometime soon.

“Deal of the Week” and the restroom post coming soon.

Tickets for the WWE Supershow, to be held at the FedExForum Monday, March 20, go on sale today. This will be a joint TV taping – first, they’ll be taping Smackdown to be shown on UPN Friday night, and then they will have a live Monday Night Raw which will be broadcast on USA Network. This show will occur right before Wrestlemania so it should be a good one.

I haven’t been to a live wrestling show in 8 years – went with one of my students to see Memphis Wrestling in 1998, and I went with a fellow instructor to WCW Monday Nitro in 1996. Normally, I’m not that interested in seeing it live, but this time I might be for one reason:

I know WWE sometimes “papers” arenas, meaning they give away thousands of free tickets so that the arena will look full on TV. Anyone got info on how to score some of those tickets?

If you are, buy a wristband from this guy: 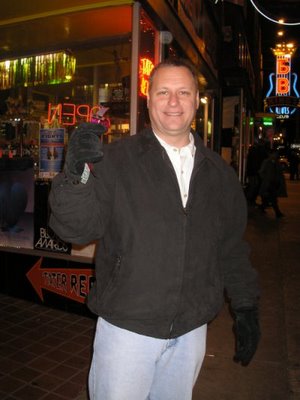 He’ll be standing outside Tater Red’s/The Black Diamond. Tell him Paul sent you. Wristbands are $12 and get you in all the clubs that are participating in Zydeco Fest.

He also sells wristbands for Beale Street’s weekly Friday night wristband night, so look for him then too.

First of all, congratulations to my former student Naseera (aka The One Normal Person Who Works At Autozone Corporate HQ) and Ron Perrone, Jr., drummer for the Dempseys, who both turn 30 today. Ron has mastered the art of time travel, as he has found a way to jump directly from age 16 to age 30.

Bad weather is moving in, but in case the forecast is wrong (NAH! that never happens) here are some things going on tomorrow night (Saturday, February 18).

– Zydeco Fest on Beale Street, 5 pm to 5 am. You can buy a $12 wristband that gets you into all the clubs, and it looks like even Alfred’s is participating. As I mentioned in an earlier post, this is worth going to just for the people-watching. Imagine the street and all the clubs packed with sexy, beautiful women. Got that? Well, keep imagining, because that is definitely NOT the crowd that attends Zydeco Fest. Lots of people come up from Looziana for this. Not Louisiana, but Looziana.

– If you want to be downtown but zydeco isn’t your thing, check out FreeWorld at the Flying Saucer. They should start around 9:30 and are always a good show.

– And over in Midtown at the Hi-Tone, there will be a Save Libertyland benefit with the Luv Clowns, Harlan T. Bobo, and the Minivan Blues Band. I may not have been Libertyland’s biggest fan over the years, but I can explain why it needs to remain open in three words: LIBERTYLAND HIRES ROMANIANS. We need to support local businesses that make it possible for college-age Romanian girls to come to Memphis to live, work, and play. Especially “play.” And there’s now a serious offer on the table to keep the theme park open. So if you’re in Midtown, come by, lend a hand, hear some bands.

Unfortunately, it doesn’t look like I’ll make it to any of these fine events. I have the James Bond party being thrown by neighbors in my building, and I’ll be hanging out with a friend who is about to leave town for 13 weeks.

In local news, the Rapscallions trivia team (minus me) hit TJ Mulligan’s last night and won second place, for which the prize was a $25 bar tab. Meanwhile, while watching the Dempseys I got handed coupons good for a free appetizer and a free drink at Swig. Considering they had to split the tab four ways, I came out better than the team did.

All right – time to get some work done, because I have a week’s vacation next week! Not going anywhere. Downtown Memphis IS my vacation. Wouldn’t want to be anywhere else.

I’ll be back with a Deal of the Week post on Sunday, and who knows, maybe before that.

Monday night, I was at the Saucer complaining to my friend Bobby that my laptop battery is a couple of years old and can only hold a charge for about 45 minutes. He told me I should check out BatteryGeek.net. They sell external batteries for laptops and DVD players. Now, it’s true that the batteries are more expensive than regular replacement laptop batteries ($169-189) and they are external, which means one more thing to carry around and plug in. But, these batteries can go a massive EIGHT hours or even longer on a charge, which is two to three times what a regular battery can do. I could take my laptop to a coffee shop or restaurant and work all day without plugging in. Pretty cool.

In addition, these batteries plug into the laptops’ AC adapters and are fairly universal. So if you upgrade to a new laptop later on, there’s a very good chance the battery will work with it too.

Looks like BatteryGeek.net gets high satisfaction ratings from customers. They offer a free battery audit: you send them info about your laptop and they’ll tell you what battery you need.

I’m probably going to order one this week. If you use laptops or other rechargeable electronic devices on the road, this might be a worthwhile investment.

Edited by Paul 8:30 PM: Sorry about publishing this multiple times. Apparently when I copied this from e-mail, it added some tags which IE didn’t like… and I wasn’t aware of this, because I was using Firefox. Should be fixed now.

Since I’m one of the few people you have chosen to name by name in your blog, it’d be nice of you to publish these corrections and clarifications. I’ve already been contacted by friends who are concerned about the negative impression that today’s blog entry involving me gives. I don’t think you had any malicious intent in writing it. Still, could you please do a Paul Harvey and tell the audience “the rest of the story”?

I didn’t show up for trivia last night to get free drinks. To the contrary, I came, as usual, simply to enjoy time with some friends.

I did say that I thought girls shouldn’t have to pay for drinks on Valentine’s Day. But I was honestly just joking. My comment was initially directed only to you, not to all of the men on the trivia team. I figured saying that would get your attention and promote some lively discussion. It did.

I only had two beers * the one I purchased and the one a team member kindly offered to purchase for me.

When I observed that my glass was empty, I said this to you jokingly. My pout was exaggerated precisely because I was joking. Joking is a theme here. If I’d really wanted another beer, I’d certainly have paid for one myself.

I was actually armed with plenty of cash and credit cards. The only reason I paid with a dollar and a bit of change was so that I could avoid waiting to sign a credit card slip or to get change for a twenty-dollar bill for my $2.50 beer. Besides, in my view it was an ideal opportunity to get rid of some change. Unlike the situation you’ve encountered many times at Walgreen’s, I wasn’t holding anyone up by counting out the change I was leaving for the waitress. It shouldn’t have annoyed the waitress too much, either, since it wasn’t a huge heap of pennies like a bum might leave.

Also, the trivia question about whether women or men talked more during sex referred specifically to talking “dirty.” I disagreed when you suggested that calling someone “hot” or “baby” was an example of talking dirty. It’s true that I declined to provide examples.

Added by Paul: Carmel was just kidding around last night, as was I when I made this post. Carmel is a good friend and an incredibly good sport about all the teasing I give her in this blog.