ATTN DYANA: Don’t know if you ever read my blog, but if you do, e-mail me – I need to talk to you and don’t have a valid address.

Friday night I’ll be going to the initial meeting of a contemporary art collectors’ group at Jay Etkin Gallery. My friend Tonya put the group together and…

Hang on, let’s post a pic of Tonya. (Have I mentioned how much I love my new camera?) 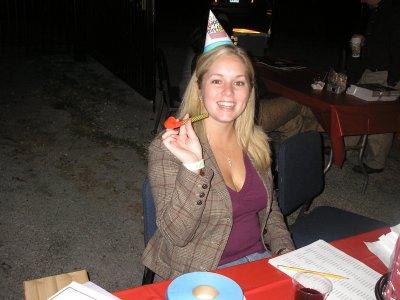 There ya go. That’s Tonya. Anyway, she put the group together through Mpact Memphis. Members of the club will get artist talks, discounts on gallery purchases, and painting demonstrations among other benefits. I’m looking forward to it, since I know little about contemporary art and would like to learn. I think if nothing else, I’ll appreciate the monthly Trolley Tours more.

Hmmm… I wonder if there will be a rush of last-minute sign-ups from guys who saw Tonya’s pic on my blog. I think the sign-up deadline was October 1 though.

Saturday: Only definite plans are to hit the Tap Room at some point and get my high score back on the Gone Fishing video game. I’ve mentioned it before, this completely stupid game where a cartoon polar bear swings a bat at fish who jump out of an icy pond, and the goal is to hit them as far down the pond as possible.

Just think… six years of college and this is what I end up doing with my life. What a waste.

Last Saturday I was in there very late-night playing the Gone Fishing game, and one of my favorite Flying Saucer waitresses, Leah, walked in. “Awwwwwwwwww! The bear is so cuuuuuuuuuute! Look at the bear!” Since then, every time she sees me, she asks me to say hello to the bear for her.

The brownies in particular are a hit. When people hear about them, they always ask, “Are they ‘special’ brownies?” One guy even offered to bring the secret ingredient to make the brownies special, but the bartender wouldn’t go for it.

The bartender, knowing I go to the Saucer after leaving Sleep Out’s, always gives me an extra brownie to take to whoever waits on me. After this had been going on for a few weeks, one of the waitresses asked me, “What do you do, Paul?” I told her that I was a web designer and that I used to teach at a university. “Oh,” she said. “I thought maybe you owned a bakery, since you’re always bringing people brownies.”

Bringing ONE brownie can cause trouble, though. One Sunday I walked in and sat in the patio area, which happened to be Leah’s section that day. I handed her the brownie and she squealed and gave me a hug and ran off to eat it. About 10 minutes later Ms. Romania (blond version), who had been working the other room, walked up to me. I could see the sadness in her eyes from across the room. “So, Paul,” she pouted, “I hear you brought Leah a brownie.” Uh-oh.

I asked if she was mad that I didn’t bring her a brownie, and she replied, “Well. Not mad, but… you know.” If you don’t speak female, “you know” is about ten times worse than “mad.” For those of you who think only American women have an uncontrollable thirst for validation and attention, meet Liana. Sometime after she gets home to Romania she will discover this blog. She won’t read it, but she will skim through the posts going, “Well? How often does he mention me?”

(An aside: You know what’s bad? Because I’m usually drunk when I type these, I had to stop and think, “Did I already blog the brownie story?” and look through about two weeks’ worth of old posts. I’m sober right now, in case you’re wondering.)

And that’s the plan for an exciting weekend. The Rapscallions missed third place by one point last night at trivia, but since we almost won a prize I guess I’ll back off from my threat to post Carmel’s phone number on my blog. The grand prize lately has been a Sam Adams golf bag. What in the world would we do with it if we won? Put that sucker on eBay and use the money to go drinking, I guess.

All right… since I’m not going out tonight I may do another blog post this evening. See you later…