Once again, I never made it to the Peabody last night after saying I was going to go – went to the Saucer then EP’s, and remained at EP’s until God knows when. It was a good night last night though – got several tube top photos. The previous Thursday I had a blog reader inform me that she had just bought 4 new tube tops… well, she was back at EP’s and had one on. “I’m going commando underneath my tube top!” she told me, although I actually figured it out before she said anything. Here’s a pic – not sure if she would want her identity revealed to the viewing public so I’ve covered her face. 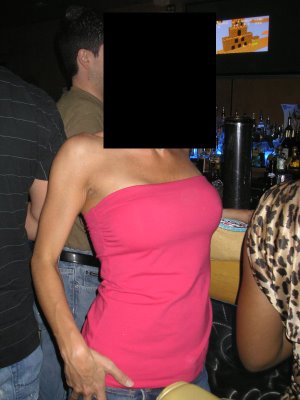 I’ll be out in East Bumblefuck today… got a meeting at Buffalo Wild Wings out there at 1. Been looking at their wing sauce menu, trying to decide what to get. Usually when I order wings I get one step below the hottest sauce – called “extra hot” at many restaurants and called “wild” by BWW. But I’ve been told I’ve been missing out by not experimenting with the other flavors of wings. Hmmm… the parmesan garlic sauce and the Caribbean jerk sauce both sound good… maybe I’ll get 6 of each.

Afterward I’ll probably hit the Wolfchase Mall and get some shopping done, then find a coffee shop with Wi-Fi and get some work done. I definitely don’t want to drive home during rush hour, so I’ll probably be out in East BF until 6:00, 6:30 or longer.

Happy Friday everyone… I doubt there will be 5 posts like there were yesterday, but you never know.