– The Orpheum will have their 12th annual art & antiques auction Sunday, July 1. See below for details: 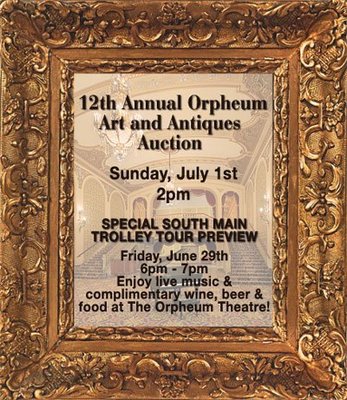 As the poster above indicates, they’ll have a special preview Friday, June 29 from 6-7 as part of the South Main Trolley Art Tour, with free eats and booze. Should be a good time – last month’s Trolley Tour was probably the best I’ve seen in my five years Downtown. South Main is hopping these days and the Trolley Tours should keep getting better and better. If you go to the tour, keep in mind you’ll be walking around outside a lot as you go from gallery to gallery – it gets hot this time of year, so be sure to dress appropriately. A tube top is always a good choice.

– Another monthly event that is really hitting its stride is Downtown Night at the Westin, which was held last night. In only two months it has become exactly what the Westin envisioned – a night for Downtowners to come together and mingle and get to know one another. It was an elegant setting with delicious hors d’ouevres and drinks, and yet casual enough that I didn’t feel out of place in shorts. Exactly what I like Downtown to be. The next one will be Monday, July 30. Of course, if you don’t want to wait that long to check out the Westin lobby, Di Anne Price plays piano there every Monday night.

– Wow… shocking news from the pro wrestling world. “The Canadian Crippler” Chris Benoit was found dead yesterday at his home, along with his wife Nancy and their 7-year-old son. It is believed that Benoit killed his wife and son and then committed suicide.

Benoit isn’t the first prominent wrestler to die, but with most of them there was at least a history of instability and/or drug problems. With Benoit no one saw it coming. In fact, he was scheduled to win the ECW World Championship Sunday night on pay-per-view, which he no-showed due to “family problems.”

A bit of wrestling history… in 1996, Benoit was a young wrestler in WCW. The booker (writer) was also a wrestler, named Kevin Sullivan. Benoit’s wife Nancy was married to Sullivan at the time and was his valet, called “Woman.” Sullivan wrote a storyline where Benoit stole Woman away and Sullivan was out for revenge… but in this case the storyline became real. Nancy fell in love with Benoit in real life and divorced Sullivan. Since then Sullivan really has been out for revenge. The police are calling it a double murder-suicide, with Benoit being the suicide, but I wonder if Sullivan is somehow involved.

That’ll do it for now… time to get some work done. I’ll be at the Saucer tonight for team trivia.