I headed out to Trolley Tour about 6 yesterday, starting at the northernmost stop, Shelton Clothiers on the Main Street Mall. I’m not a suit-and-tie person but they still had plenty of stuff I would wear – trendy club shirts, casual linen shirts. They also had some wallets and money clips I liked – may go back and buy one next week. Still dealing with the Costanza wallet.

After that I hit the art auction pre-party at the Orpheum, which was PACKED. So packed that I gave up trying to view the artwork and left, after saying hello to fellow blogger Amy W and to blog readers Mendi and Meredith. Meredith had a tube dress on. I forgot to take a pic though.

Walked down to South Main, and for the first time in almost a year I managed to hit every gallery on the tour. Usually I get caught up talking to people and miss half of them. Saw some pieces in Jay Etkin’s gallery that I would have loved to take home, but they were four grand apiece, so no art purchases for me this month.

At 9 I moved on to Earnestine & Hazel’s for Crash Kole and the BlueSouls, which proved to be the high point of my evening. Here are a couple of pics: 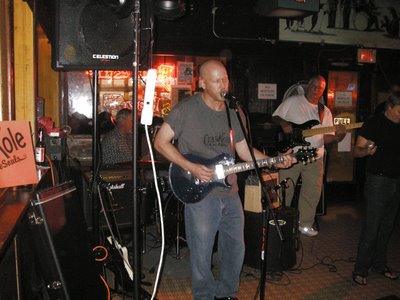 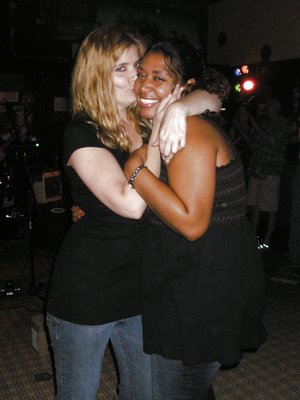 I had planned to only stay for a few minutes, but extended my stay at E&H when the band turned out to be FANTASTIC. Their name describes their music well – bluesy, soulful rock. They played “Who Do You Love,” some Stevie Ray Vaughan, Jimi Hendrix’s “Voodoo Chile,” lots of other good stuff. It was loud and rough and perfect for the venue – the music blended in with the smell of soul burgers, the grimy walls full of pictures of celebrities. I stayed over an hour and when they went on break, I walked up the street and recruited a friend to come back and see them.

Attn Sleep Out Louie’s refugees: The next time Crash Kole and the BlueSouls play E&H, I am DRAGGING your asses out. They are that damn good.

So I walked back into E&H with my friend Chuck, and since the band was still on break I showed him the upstairs, which he had never seen. I told him about the building’s history as a brothel. “So you mean, 60 years ago, this is where gentlemen came to pay for some quality time with a lady?” he asked.

While upstairs at E&H, a fellow Downtowner offered us a tour of his condo above the Recording Academy on South Main. I snapped this pic of the South Main District from his roof: 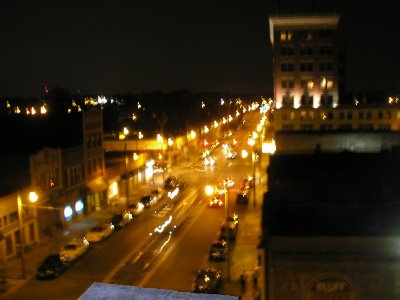 Afterward, I got a ride back up to the Saucer, but it was just stupid packed so I didn’t stay. I headed to EP Delta Kitchen, equally packed. Hung out with some friends on the patio, but after they left I started to tire out… went downstairs, where regular blog reader L told me there was “good dancing tonight” and I really wanted to stay, but I was hitting the point of exhaustion. So I wandered home. Good thing I did too, because one of my consulting clients had an emergency that I had to troubleshoot at 8 in the morning.

Heading out… the tentative plan for today is 1) Flying Saucer; 2) Barton Flats rooftop; 3) my own rooftop; 4) walk down to Main and Jefferson to view Lantana Projects’ exhibit; 5) probably back to my own rooftop (maybe Barton Flats) to view fireworks; 6), 7), 8) and beyond… who knows. Most likely I’ll end up at EP’s again.

Don’t forget, today’s the last day of Tube Top Month. Not that I discourage the wearing of tube tops after today, but this is really a good occasion to send the month out with style. And what says “style” more than a tube top!