We had a GREAT time tonight.  The gang met at Itta Bena a little before 6, where the complimentary appetizers this week consisted of sushi and Asian chicken.  After a few drinks there, we moved on to the Red Rooster, where we had reservations.

One of the owners, the one with whom I had made the reservation, picked out a section for us to the right of the front door where we had our own private TV for viewing for a party of 16.  Although, no one really paid attention to the game after the food I ordered showed up – the Sexy Fat Boy Nachos ($12).  As I wrote last weekend, that seemed a little high for nachos, but once it came out, I understood – it was Mount Nachos and it was even bigger than the nachos I saw on Saturday.  Seriously, this thing was piled higher than the tallest mountain peaks in seven U.S. states.  Not only is it way more than one person could eat, but I doubt two people could split this thing and get through it.  Here’s a pic. 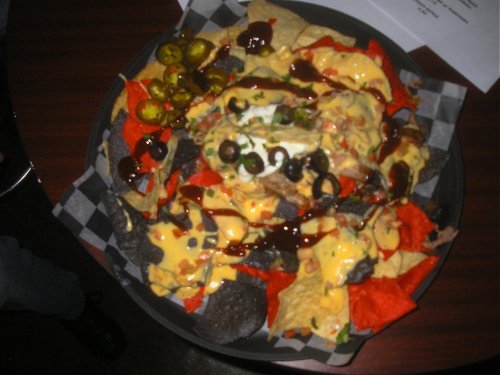 And here’s a pic of the Nuh-Uh Girl eating the nachos: 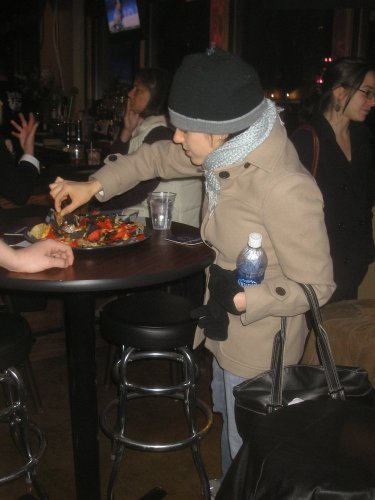 It couldn’t have been any better.  Every seat in the house had a good view of at least one TV.  The bartenders came over and introduced themselves, and once they found out we lived within walking distance, they treated us like royalty.  They seriously want our business.  The owner also came over a few times and asked if there was anything he could do for us.  It was busy but not jam-packed during the game.  They had the sound on for the game; once over, the DJ started spinning.  A few selections to give you an idea what they play:

I am really starting to love that place to the point where it may challenge the Saucer for my #1 ranking.  I will definitely be back either Friday or Saturday, not sure which.  Dammit I wish it wasn’t Dempseys night tomorrow at the Saucer so I could go to the Rooster for “Rock Out With Your Cock Out” aka cheap beer night.  Thumbs way up based on what I’ve seen so far.  This is a much needed alternative to the clubs on Beale.

Time for the beer report.  I did two beers at lunch and a third before hitting Itta Bena.

More good news:  Through the Handling-Panhandling group we got one of the bums banned from the Premier Parking lot at Main and Beale.  I got photographic evidence of him back on that lot tonight.  That photo has already been brought to the attention of the lot owner and MPD.

Even more good news:  I renewed my lease today, my sixth lease at 10 South Main.  That will make me a Downtowner until at least February 2009.

Been an awesome day, time to get some sleep and recharge in prep for another awesome day tomorrow.