It’s two days until the beginning of October, but I’m going to go ahead and announce my BFF of the Month decision.  This is the most even contest in the history of BFF of the Month – we have the St. Jude scientists, Jenny and Michelle (wanting to do a double BFF), versus Calhoun’s bartender and Best Pool Partner Ever Lauren.  Both are highly qualified.  So, after a lot of thought on the matter, I’m going to give one of the candidates the opportunity to decide their own fate. 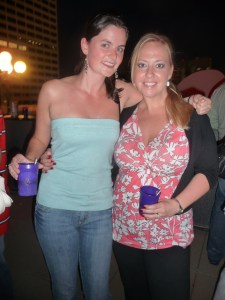 Jenny and Michelle (pictured at left, and note that Jenny has a tube top on) will be the October BFFs… IF they can do one thing.

Their trivia team must beat my team, the legendary Rapscallions, Tuesday night, September 30, at trivia at the Flying Saucer.

Keep in mind that Jenny and Michelle and the other St. Jude scientists have played trivia against us many times before, and have NEVER beaten us.

I have no doubt that they accomplish brilliant things in their research, but it’s time for them to prove that they still have some smarts once they step out of that lab.

If Jenny and Michelle’s St. Jude team beats the Rapscallions fair and square tomorrow night at trivia, they will be the new BFFs. 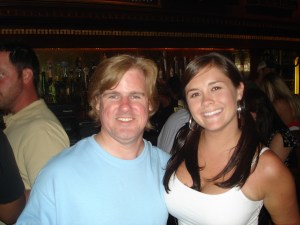 If they lose to the Rapscallions, Lauren (pictured at left) will be the new BFF.

In case of a tie, and both teams finish out of the prize money (so there is no tiebreaker question), Lauren is the new BFF.

If the St. Jude team no-shows trivia tomorrow, Lauren is the new BFF.

If I have even the slightest suspicion that Jenny and Michelle’s team is cheating at trivia, Lauren is the new BFF (note: I’ve never suspected them of cheating in the past, but desperate times call for desperate measures).

All things considered, it would appear that Lauren has an advantage here.  I’m giving her a big advantage because of the out-of-line “barmaid” comment her competition made.  However, her competition has the advantage of being able to determine their own fate.  So all in all, I think it’s fair.

(Edit:  One more thing.  If Memphis receives more than 1 inch of snow tomorrow, September 30, former BFF Meghan from Big Foot will regain her status as BFF for the month of October.)