Didn’t go to Music Fest last night… people watching is more fun than the festival itself.  Started off at the Saucer, but the high point of the early evening was definitely standing on the Silly Goose patio with Air Traffic Mike.  Tracy was selling hot dogs on the patio.  Here’s a pic of Air Traffic Mike eating a hot dog: 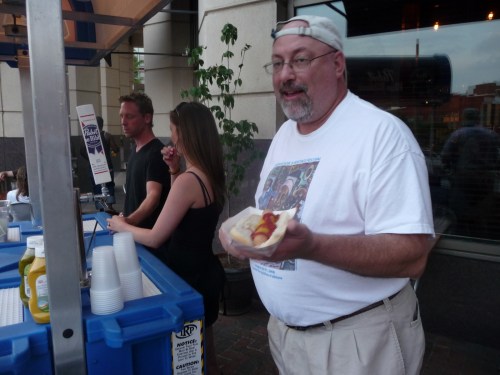 Air Traffic Mike said the hot dogs Tracy was serving were really good, but I didn’t buy one because the weiners looked slightly off color.  Tracy’s buns looked fantastic though.

While there, I got a look at the celebrity lineup for the Goose’s Cinco de Mayo burrito-eating contest at 8:30 PM on Tuesday, May 5.  Here it is: 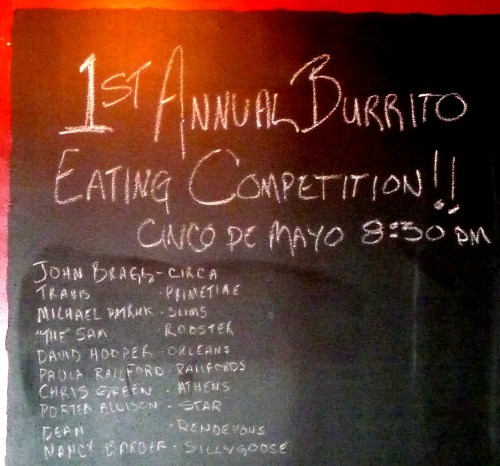 John Bragg, Michael Patrick, Paula Raiford and Hoop are among the names.  I think they should invite the Nuh-Uh Girl to enter… she’s a celebrity too (thanks to this blog) and can out-eat anyone on this list.

A little after 10 I headed south to the South Main Dirty Dozen party at the Happy Mexican Club.  Yes, club.  Did you know that, south of the restaurant entrance, there’s a nightclub?  A really nice nightclub, too, with a big dance floor and a good bar.  Great location for the party!  Hung out there for a couple of hours, then I said to my friend Nick, who’s new to Memphis, “You’ve seen Paula & Raiford’s Disco, now do you want to see the other one, Hollywood Disco?”  So we made the short walk to Vance.

We hung out there for a while, then decided we were hungry, and headed over to the Green Beetle to eat, taking a new friend with us.  Ate, then went back to the Disco – they’ve changed the rule, and allowed re-entry there – nice.  After another beer it was time to call it a night… walked outside, and it was pouring rain.  Home was 7 1/2 blocks away.  “This is going to suck,” I thought.  Then the Disco’s limo driver said, “hop in, I’ll give you a ride,” and I got home nice and dry.  I really like the Disco and the only reason I don’t go there more is the distance from home compared to the other one.  They are great people and I really hope Downtown is big enough for two discos.

Attn new friend:  You have my number.  You said you’d call today.  Call me.

Hmmm let’s see what my Facebook friends have been up to… “Amanda has a big hat and is ready for the Kentucky Derby party.”  Confirmation that Amanda is indeed a big dork.  I bet Ptolemy Kat is going to that party too – it sounds like the kind of thing she’d get excited about.  Just checked Kat’s blog for the first time in a couple of months, and the first post mentions the “U-Club.”  It figures.

And Rochelle changed her profile pic to one where she’s wearing a tube top… nice.  Although, I’ve never understood her obsession of taking pics of her feet, and other people’s feet.

59 and raining as I type this… yep it’s Music Fest weekend.  I’m about 50/50 whether I’ll go today.  The thing is, if I go, I can get in the Memphis Flyer tent and have free beer all day, and get a guest in too (have not yet selected a guest).  The downside is that I still have to pay for a ticket to get in the park, and get soaked by the rain, and tromp around in the mud, and deal with the idiots in the crowd.  Don’t know… if I don’t go to the fest itself I’ll hang out on Beale Street most of the day, with occasional trips to the Saucer.  Time to get Saturday started… outta here for now.