So, I got to the Ques Brothers booth about 2 PM yesterday, and what was the first thing I saw? 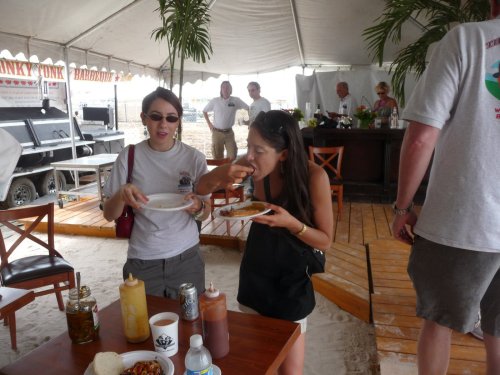 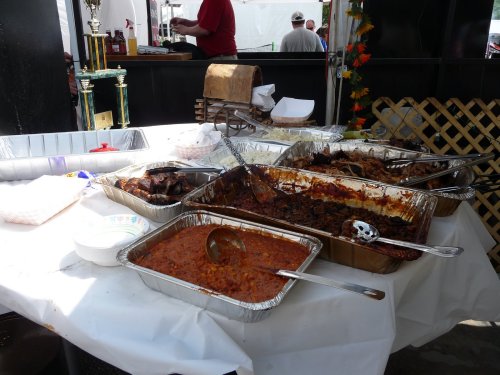 Not long after I got there, I decided to walk around the south end of the park, and discovered that my landlords Henry and Heather had a booth.  Here’s a pic of their Chilean chili, which was AMAZING.  I texted the Nuh-Uh Girl and told her about it, and not long after she arrived back at the Ques Brothers booth with two big bowls of it. 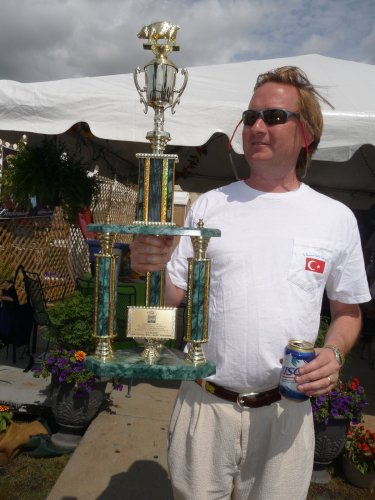 Henry holding the Anything But trophy his team won Friday. 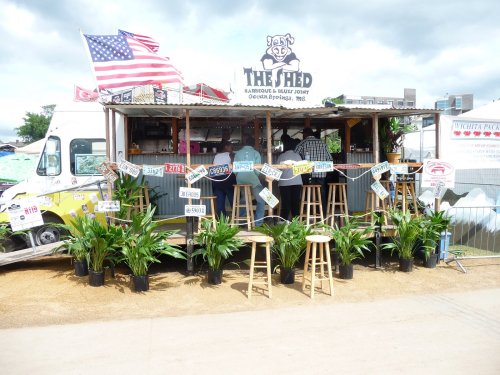 This is The Shed, the team that beat us for best booth. 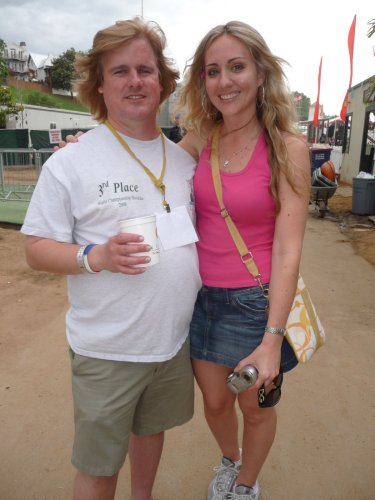 Best Saucer waitress ever.  There will never be another Jenn B. 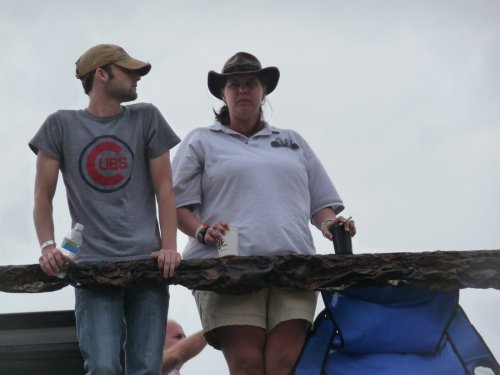 Take a look at the guy on the left… THIS IS THE MAN if you’re throwing an event.  He’s the reason our booth looked so good.  His name’s Brent and you can reach him through the Holliday Flowers website. 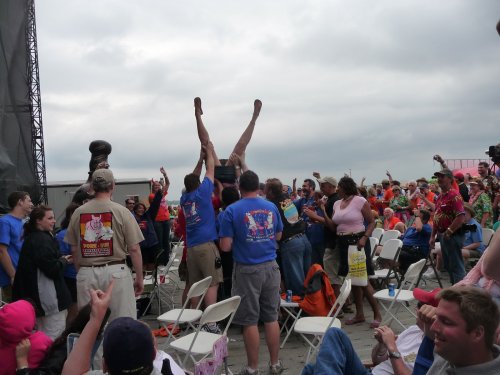 People were doing keg stands at the awards ceremony.  I wish I’d waited another 2 seconds to snap this photo, because this girl pretty much had no secrets left when they brought her down. 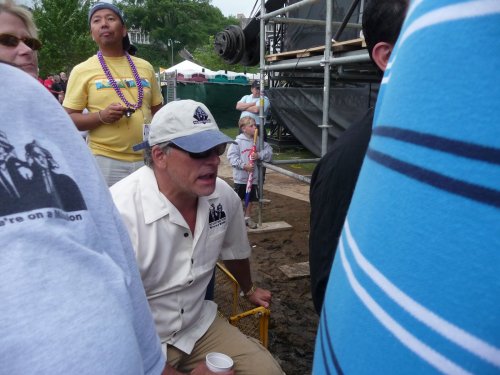 We waited to hear our name announced in the Top 10 but it didn’t happen.  We later found out that we slipped all the way to 33rd in shoulder.  The godfather of the Ques Brothers expresses his feelings on the standings: “BULL….. SHIT…..” 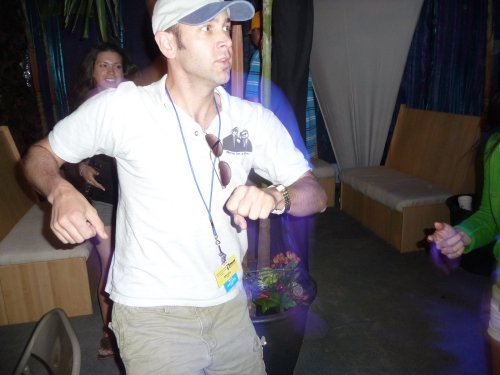 Awards ceremony notwithstanding, it was still time to party when we returned to the booth.  Here’s a pic of Skippy getting down. 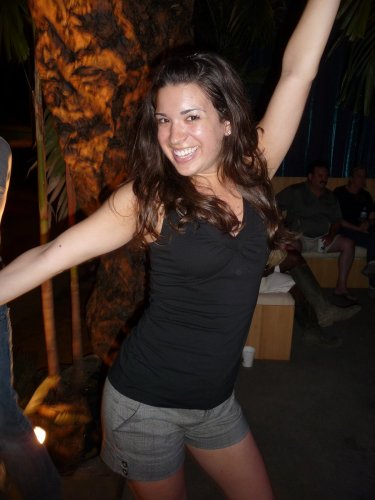 Here’s a pic of Alexis getting down. 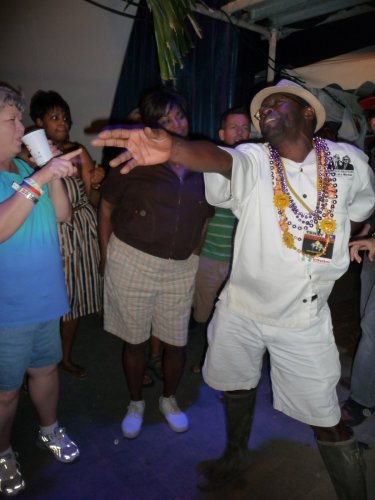 Here’s a pic of Terry getting down.  “Lady Marmalade” came on and he did a solo dance. 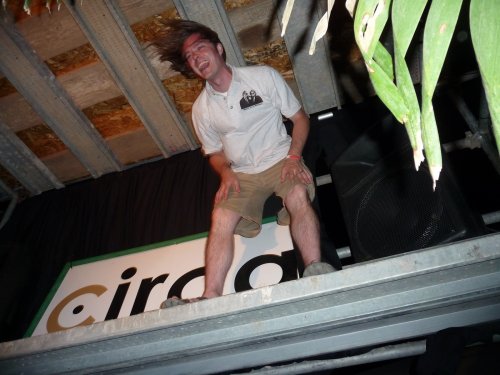 Clay didn’t get down, he got up. 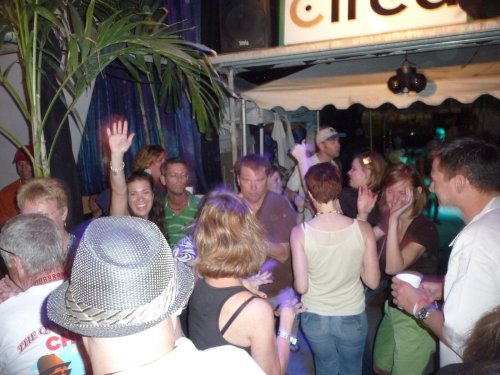 Here’s a pic of everybody getting down. 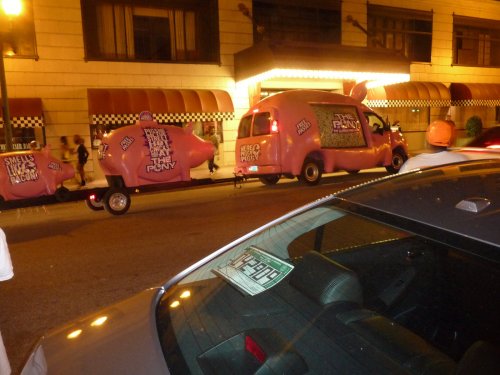 Strip club The Pony rode around Downtown and handed out passes.

Post-BBQ Fest, my neighbor Nick and I and two girls went to Paula & Raiford’s Disco, and who did we see there but… 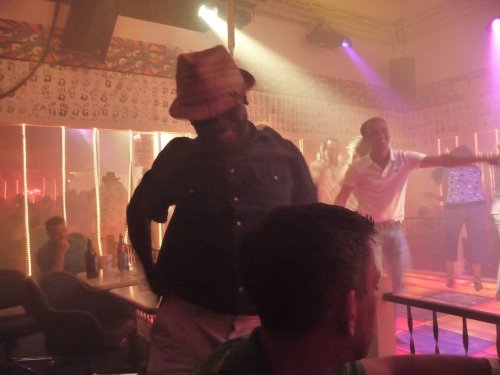 Apparently he didn’t get enough dancing in the Ques Brothers booth. 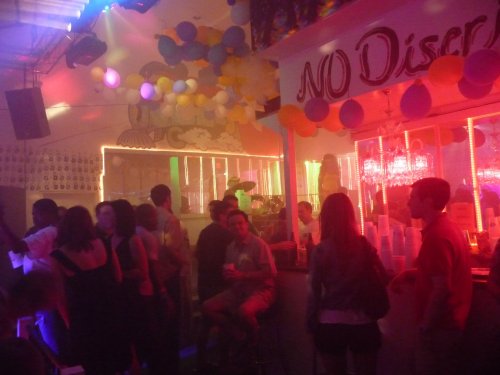 The disco was packed last night.  We stayed until about 3.

I’m not done with BBQ Fest yet… I still have more stuff to post.  Someone gave me a copy of the video of our Ms. Piggie Idol contest, and I’m going to upload it and post it.  I also did a booth walkthrough video that I’ll post, and then there’s a video of Skippy dancing last night that I need to review and decide if it is blogworthy.  Most likely it is.

I added about 160 pics from yesterday to the Ques Brothers photo gallery.  To jump right to yesterday’s pics, go to Page 12 and locate the photo tagged “Saturday, May 16.”  If you like looking at photos of 50 year old black men dancing, you’re probably going to be real happy with yesterday’s pics.

The team is tearing down the booth and loading out as I type this.  I’m using my webmaster exemption from physical labor.  I’m sure I’ll probably meet up with the team later today.