The Snuggie Pub Crawl was last night at four Downtown bars.  I made a last-minute decision to buy a Snuggie and do the crawl, and am glad I did.  It was a lot of fun.  Here are some pics. 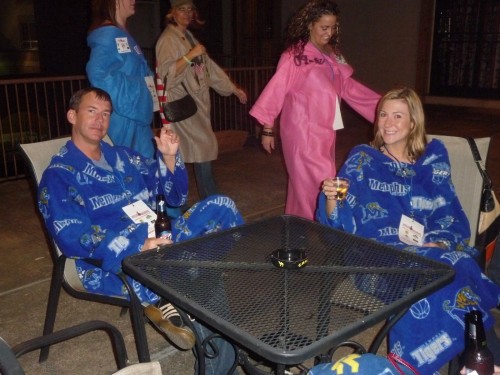 Meredith finally made the blog for something other than wearing a tube top.  Here are Tom and Meredith in their Memphis Tigers Snuggies, in the VIP area above the Tap Room. 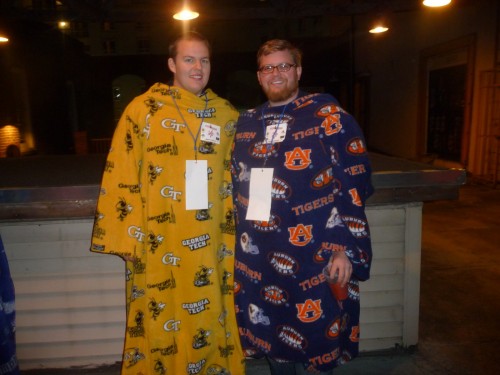 On the right is @finnious, one of the best Memphis Twitterers, rocking the Auburn Snuggie. 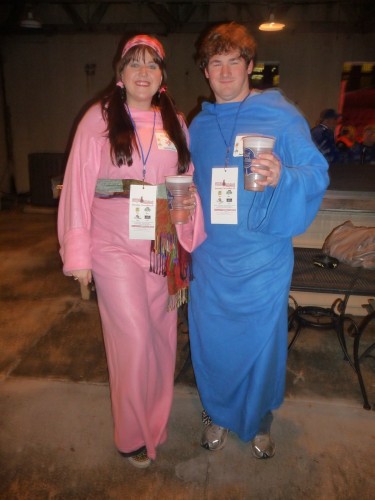 Crystal and Tyler.  I got Tyler hooked on the Foursquare app for the iPhone last night.  Looks like the Majestic Grille will soon have a new mayor. 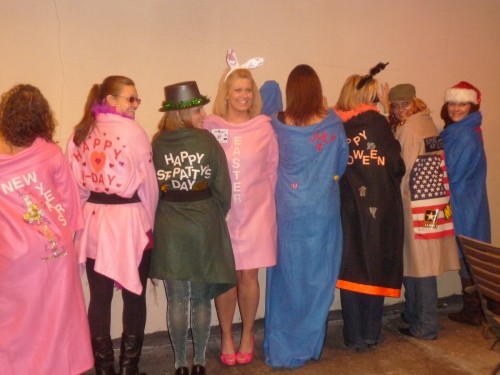 These girls won the best group Snuggie award for their holiday Snuggies. 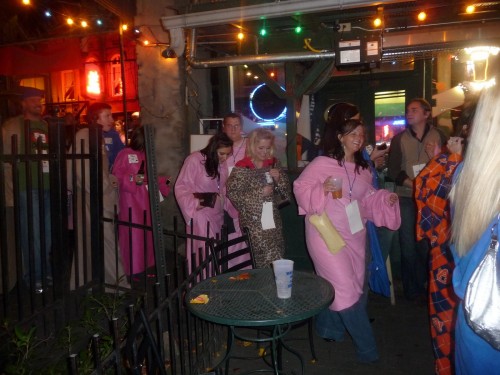 A parade of Snuggies comes through the gate at Silky’s. 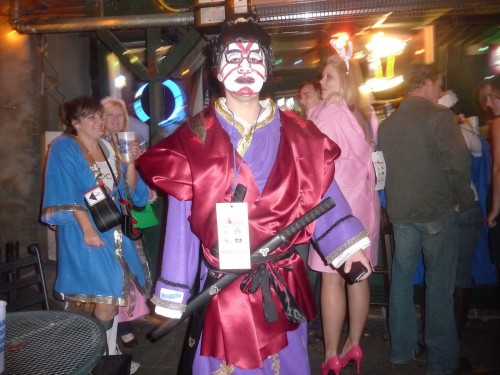 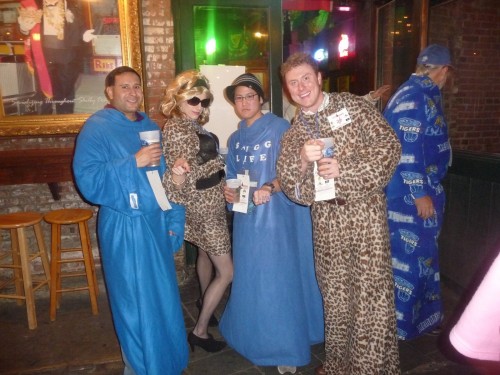 Silky’s courtyard.  I kept moving back and forth between the courtyard and inside the bar to watch the Arkansas-LSU game on the big screen.  I’d been saying that I hadn’t seen a good overtime game in a while.  I got what I wished for last night, although not with the outcome I wanted.  LSU won 33-30. 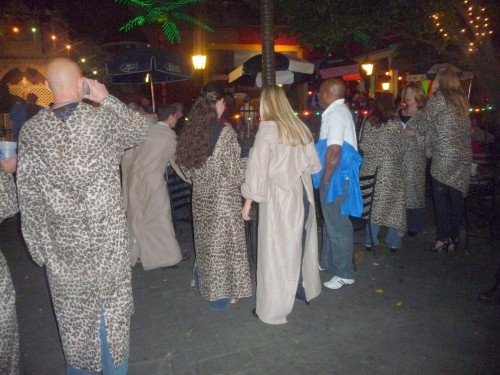 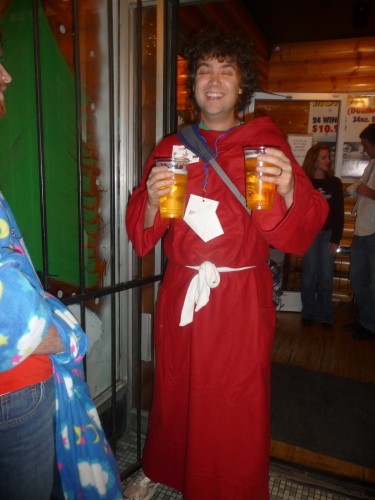 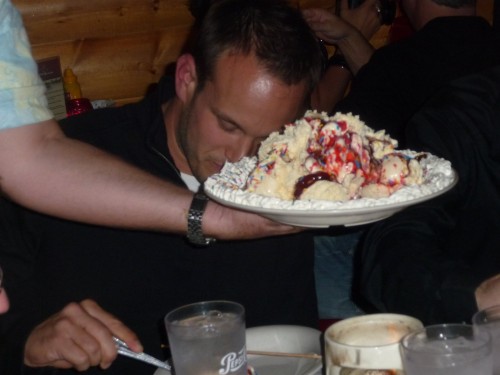 The Kooky super-sized ice cream sundae.  I forget what this thing is called since they changed the name.  This guy better be happy that the Nuh-Uh Girl did not attend the pub crawl, because if she did she’d be right in his face going, “Can I have some???” 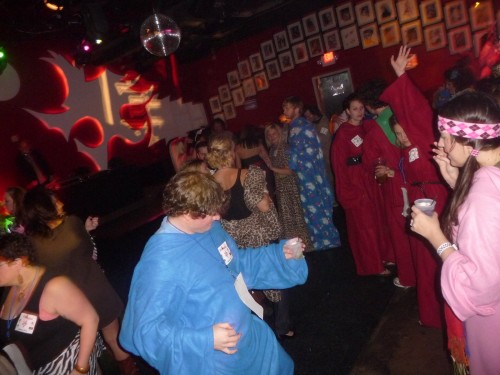 Snuggie wearers getting down at Club Chill.  I must admit, I found it hard to dance in a 6 foot long Snuggie. 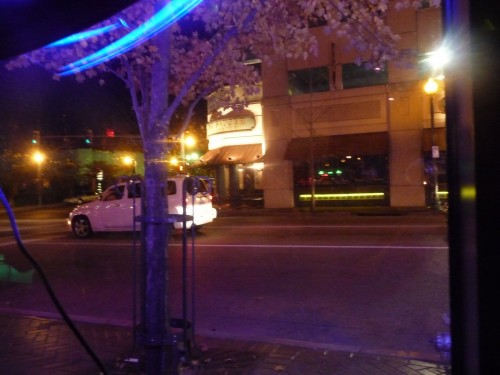 Now I know how astronauts must feel when they view Earth from outer space. 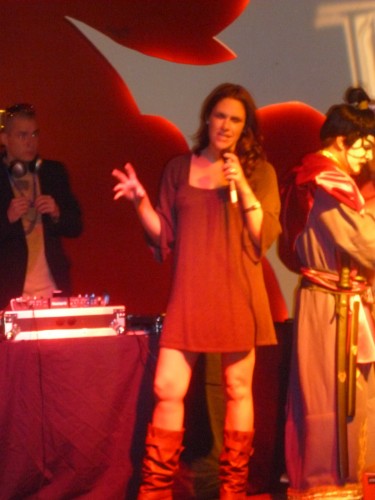 Christina announces the winners of the Snuggie contest. 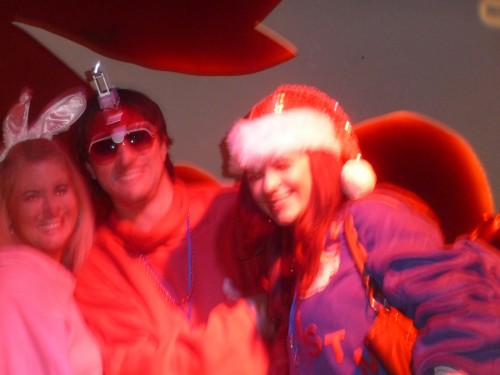 Yeah I know, kind of a blurry pic, but it’s hard to hold a beer and zoom in with a camera.  The guy in the orange Snuggie won for originality for incorporating the booklight that came with it.

Full album (134 photos) can be viewed here and is worth a look.  This is an event I just can’t do justice with a dozen or so selected photos for the blog.

Also don’t forget to visit Amelia’s Voice and consider making a donation if you couldn’t make it to the pub crawl last night.

Next week is the grandaddy of all Downtown Memphis pub crawls… Stumbling Santa.  It’s also the marathon, the holiday parade, the SEC championship game, and about a zillion other events.

Hmmm I’m up too late to make it to brunch at the Majestic… think I’ll play another freeroll tournament on PokerStars, then head to the Saucer for Sunday Fun Day.