The Tennessee Vols men’s basketball coach Bruce Pearl was at the Flying Saucer Halloween party last night. He was there inviting people to a barbecue he’s having at his house next week, but he asks that everyone not mention it if the NCAA comes a-knockin’. He invited a few of the Saucer girls to the barbecue as well and invited them to join “Uncle Bruce” in the hot tub once he gets done talking to the recru- er, once he gets done talking to a few friends who play high school basketball about their plans for next year. Here’s a pic: 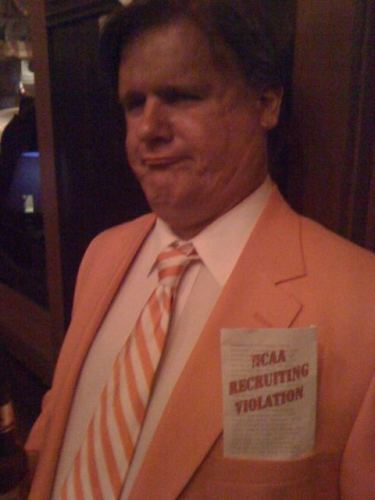 Word on the street is that he’ll be doing some more recruiting tonight at Kooky Canuck and Bardog Tavern.

I have a comment about costume contests this year: There is no way any Lady Gaga or Jersey Shore costume should ever win a “most original costume” contest. If they win overall for best costume, that’s fine, as I saw some very well-done Gagas and DJ Pauly Ds last night. But most original? Never.

I enjoyed the costumes last night at the Saucer and the Silly Goose. Wow, I never realized Ronald McDonald was such a big drunk.

Not sure what I’m going to do today. I don’t plan on drinking any beer until 6 PM. Thinking maybe lunch at Cockadoos in a little while.