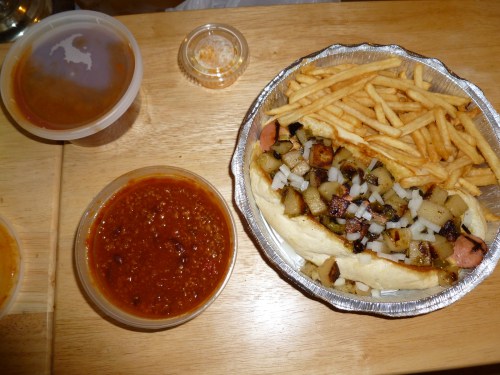 How plans change. Tonight I meant to start at Bardog for happy hour, then do a venue change to Ferraro’s about 7:30 for their first weekly trivia night. However, radar indicated that Ferraro’s, 10 blocks away in the rain and lightning, was not in the plans. So I settled in for Pint Night, where all draft beers were $3. “I’ll have the good stuff,” I told bartender Amanda Panda, “the PBR.” About 9 I had told people I was about to leave, then announced to the night shift who had just come on, “Well, you know… I think I’m going to have ONE MORE.” Hope no one was waiting on me to leave. I also ordered food. I asked how much a bowl of their award-winning chili was, and I think they said $6.29. I ordered that and the “daily dog,” which today was an Italian hot dog with onions, peppers, hash and mustard. Obviously I was thinking dipping with the chili.

The amount of food I got was astonishing. They brought me two to-go bowls – not cups, bowls – of their chili, along with the dog pictured above. Either would have been a complete meal by itself.

The math teacher in me is discovering that there’s a direct correlation between how many PBRs you have and how much food ends up on the floor.