Last night as I was drinking a beer at the Flying Saucer, I noticed that the food menus had been replaced. I took a look and found they had made their first significant revisions to the menu since 2006.

The main thing is that the pizza and wing options have been greatly expanded. You now get to choose from four different wing sauces, and instead of ordering one of four pizza slices with pre-chosen toppings, you can now build your own. 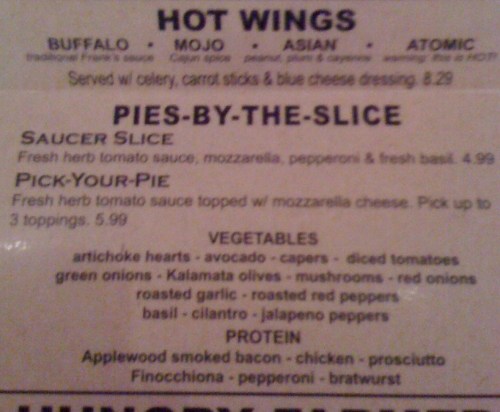 I got to sample a couple of the Atomic wings last night, and they are good. They have more of a delayed heat, rather than burning your lips as soon as your lips touch them. Three minutes later, you still know you’ve eaten an Atomic wing. Heat is roughly comparable to the honey habanero wings at Max’s Sports Bar. I’ll be ordering a full bowl of the Atomic wings soon. They come with celery, carrots and blue cheese.

Hummus and pita bread has been added as an appetizer. The wraps have been removed from the menu, although the Hippie Hollow lives on as a pita sandwich.

Overall, menu changes look good, and will give me some new things to try. Plus, the food will be much more enjoyable than it used to be, since bar patrons no longer have to breathe cigarette smoke as they eat. Kudos to the Saucer on the positive changes they have made this month!