Last night I made my usual stop at the Flying Saucer. I noticed there was something new on the shelves underneath the beer taps that hold the glassware – several copper mugs. I wasn’t sure why they were there until I walked around a bit and saw the new flyers that had been posted – one of which advertised a new cocktail at the Saucer, the “Moscow Mule.”

It wasn’t the first time I’d heard of this drink. My friend Air Traffic Mike enjoys a good Moscow Mule from time to time up East where he lives now, and he has texted me photos. According to the Wikipedia entry for Moscow Mule, the beverage is made of two parts vodka, one part lime juice, and three parts ginger beer (although this can vary from 2-4 parts). It’s served on the rocks, in a copper mug. The Mule was invented in 1941 and became popular during the vodka craze of the ’50s. Despite the name, the drink was invented in the United States. It’s called the “Moscow” Mule because of people’s tendency to associate vodka with Russia.

In honor of Air Traffic Mike, I ordered one. 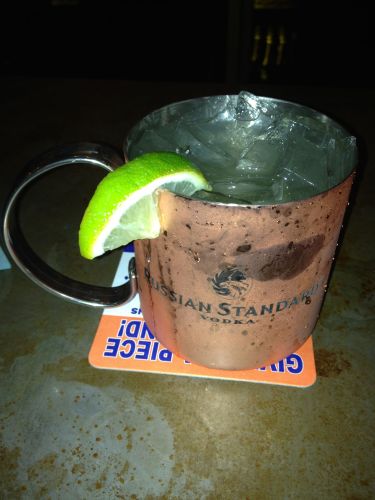 This was a really tasty beverage. As you know, I like drinks with lime in them, and the ginger gave it a “zing.” It took only a couple of sips for me to realize that this beverage is really strong, and not to be gulped down the way I would a Dos Equis Lager. It took me well over an hour to finish it. Cost was $8, but considering there was as much alcohol in this cocktail as you’d get in two beers, this was not a bad value at all.

Thanks to Air Traffic Mike for turning me on to this tasty drink. ATM is back in town next weekend for a visit, so maybe I’ll get to have a Moscow Mule with him.