This morning I took the trolley north to A. W. Willis Avenue (25 cents today because there’s an ozone advisory). Then I walked across the bridge to Mud Island Greenbelt Park, where LuvMud Island was taking place. 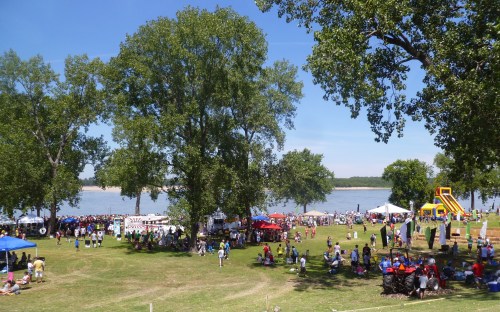 When I got there a little after 11:30, a crowd had already started to gather, especially where there was shade. The runners were lined up and started taking off in heats about 10 minutes apart. Food vendors included the Revival and Scratch food trucks, Cafe Eclectic, and Crepe Maker. 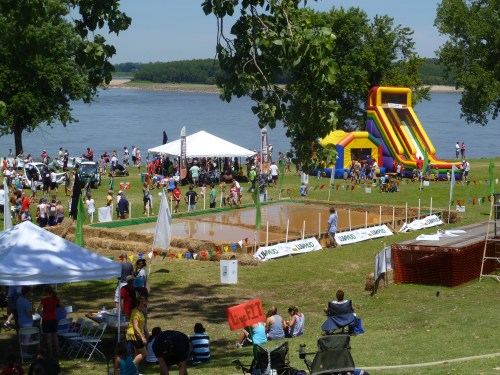 The final obstacle on the obstacle course was a 50-foot mud pit. 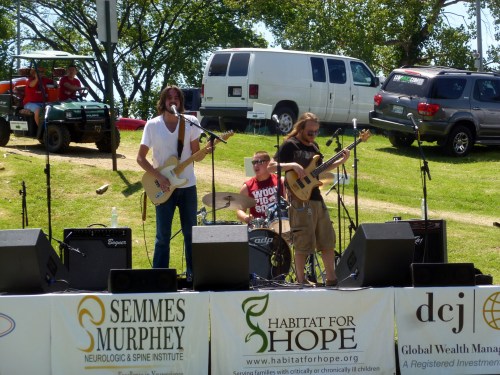 The first band of the day got the runners motivated. 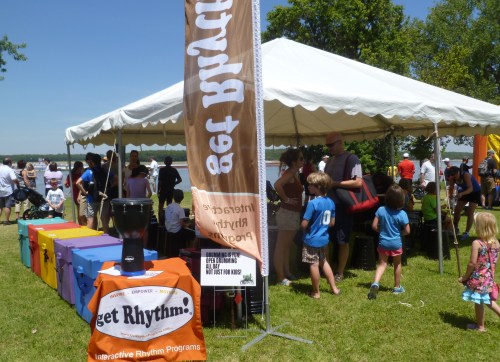 The get Rhythm! tent invited everyone to come in and try their hand at drumming. 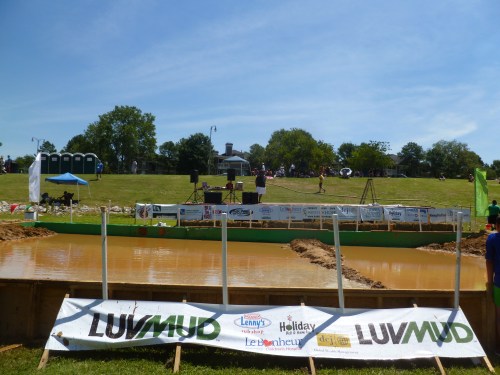 The pit up close. To protect the Tube Top Cam and iPhone, I decided to move farther away from the pit and rely on zoom to photograph the runners. 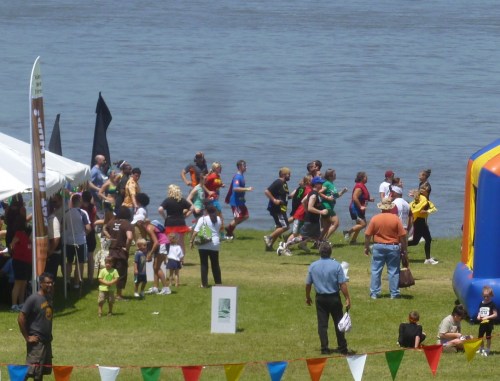 Here comes Rusty, and… they’re off! 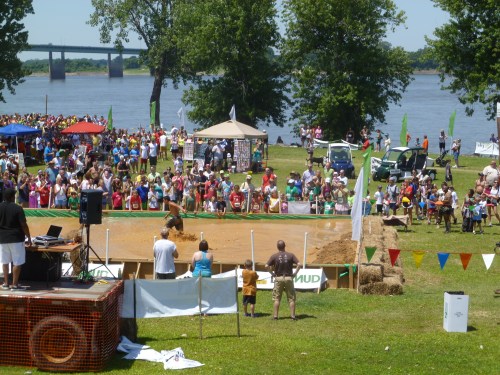 The first-place finisher. Most of the people who finished within the first 5 minutes of this guy weren’t concerned with wallowing around in the pit. They were serious runners who were shooting for the best possible time. 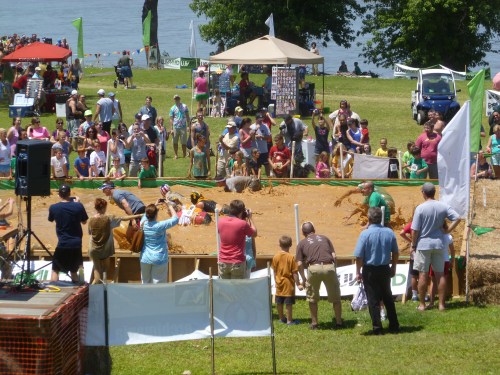 However, there were good reasons to wallow around in the mud. LuvMud had hidden a couple of prizes in there, including an iPad and an iPod Nano, which could be exchanged for new, working models at the finish line. There was also a car key in a Ziploc bag that was found in the pit. That wasn’t a prize – it fell out of someone’s pocket. 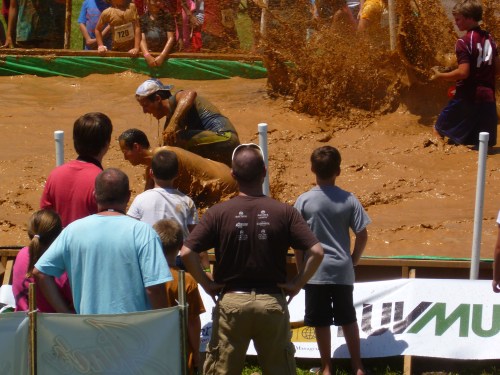 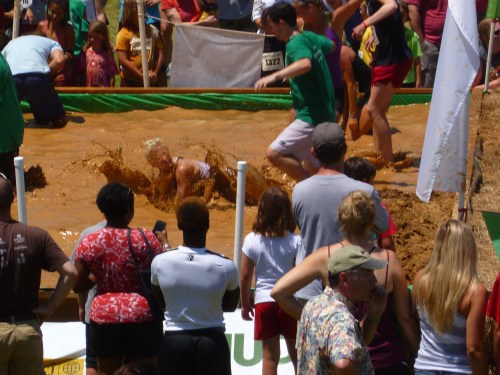 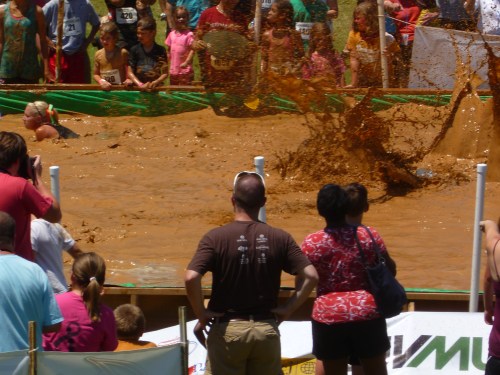 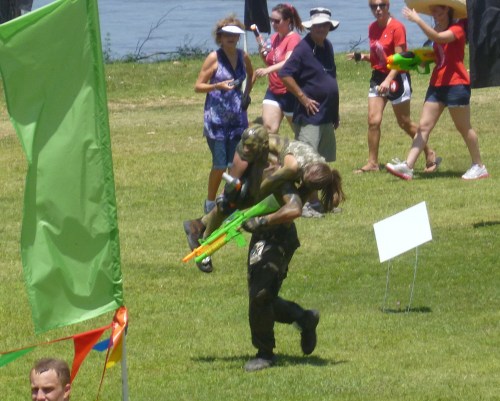 Rambo and his girlfriend won the costume contest prior to the start of the race. 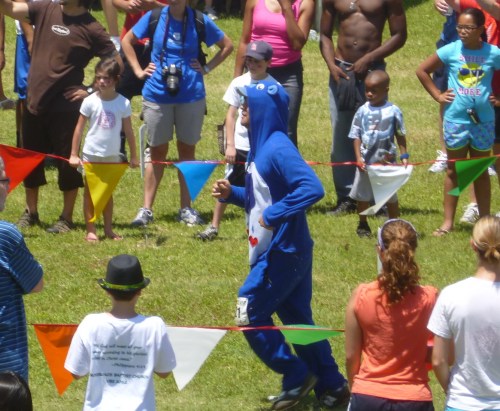 He hoped there were cookies in the mud pit. 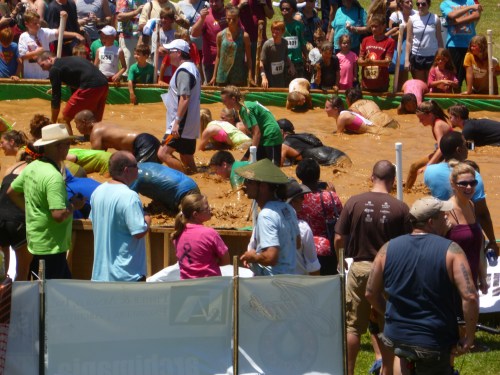 That iPad’s gotta be in there somewhere… 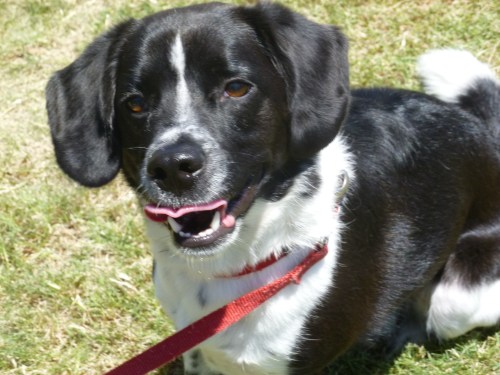 Roscoe was excited about the 2 PM dog lover’s race. 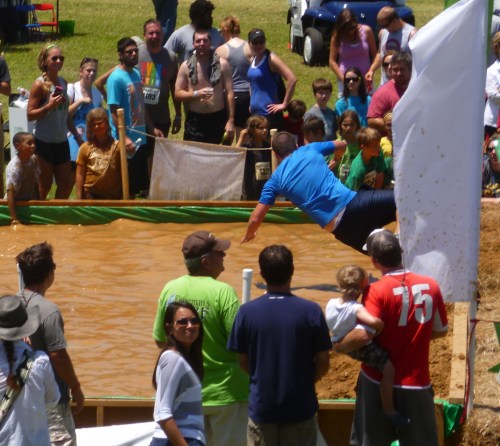 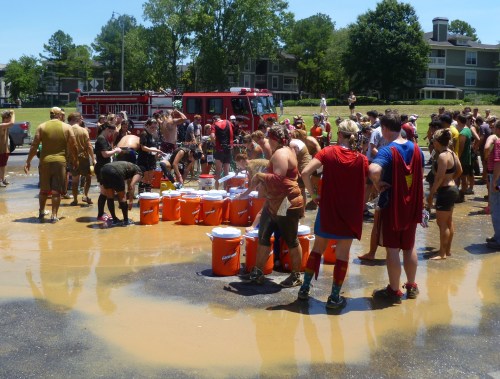 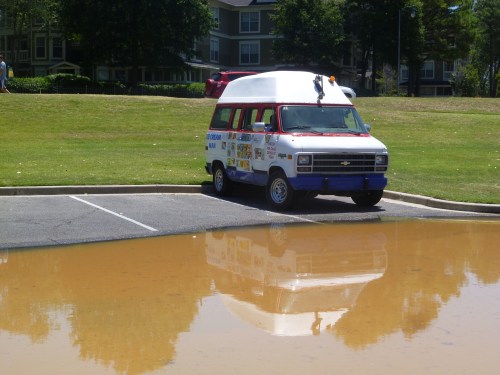 Bad day for the ice cream man. No one could get to his truck! 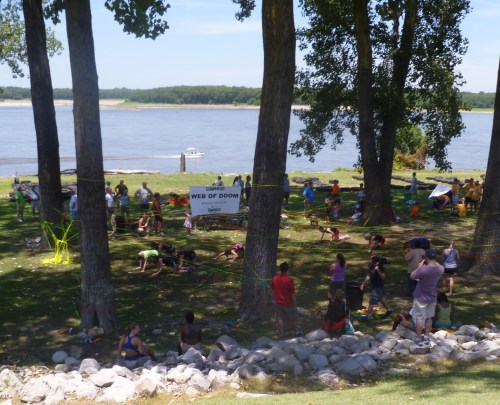 The Web of Doom, another obstacle the racers had to navigate. They also had to run through buses and over giant haystacks.

Full photo album (114 images) here. This isn’t an album where you’ll see a lot of the people I hang around with; however, if you ran the race, you may well find yourself in this album!

The participants didn’t really stay around for the festival (which goes until 7 tonight) as much as the organizers probably hoped they would. I can understand why though; it was extremely HOT! There was a group of 6 of us that were going to walk over to my friend Bob’s place on the Island for smoked Boston butts. However, by 2 I was completely dehydrated, even though I’d only had one beer. I realized I could walk home to my place as easily as I could walk to Bob’s; so I did, stopping at nearly every convenience store on the way for a cold drink.

If what you see here looks like fun, you don’t have wait long to jump in and get muddy. LuvMud will have a festival in Shelby Farms Park September 28 and 29.