I’ve come down with the summer cold that, from what I’ve read on Twitter, seems to be making its way around the past couple of weeks. Coughing, sneezing, sniffling, sore throat, fever, all the usual symptoms. Called in sick because of the fever.

Let’s see if I can get a quick news post out before I go back to bed. The big event today is the Flaming Lips, who are playing a concert at Handy Park. They will have taken the stage by the time I finish this post and publish it. $20 to get in. This is part of an attempt to break the world record for number of concerts in 24 hours. They’ll play five venues in Mississippi, then Baton Rouge and New Orleans.

Looking for something to do after the show? It’s Wine Down Wednesday at three nearby spots: Itta Bena (in the top floor of BB King’s), Silly Goose, and Brass Door. Another option would be to hit the Redbirds game post-concert. It starts at 7:05, and it’s Wet Your Whistle Wednesday: For only $10, fans will receive a field box ticket, 16oz Pabst Blue Ribbon beer and a PBR koozie.

I mentioned Kooky Canuck’s Canada Day party yesterday. If you go, be sure to download stiQRd to your smartphone and scan their QR code. 10 visits, 10 scans = $10 gift card.

I’ve seen discussion on Twitter for a while now for a new festival coming to Memphis. It’s a Best Memphis Burger festival, organized by Seth of the Best Memphis Burger blog. It will be Sunday, September 30 in the parking lot at Minglewood Hall, from 10 AM to 5 PM. Restaurants will compete in the contest, but anyone with a grill can enter. Activities will include cooking competitions, eating challenges, live music, vendors, food trucks, pet adoption opportunities and more. Proceeds from the festival will benefit Mid-South Spay and Neuter Services. Keep an eye on the festival’s website for more news to come. I haven’t posted about it because I didn’t want to steal Seth’s thunder, but it’s on the Flyer website so I assume the cat is out of the bag.

The Rumba Room was broken into last night. If you were on South Main about midnight last night, check out this link and see if the two guys in the photo look familiar.

An administrative note: I’m getting a ton of requests this week – call me about this, email me about that, need help with this, text me about that. Between being sick and having a high-priority project at work, I am swamped this week. I’m not purposely being rude if I don’t get back to you immediately – I just don’t have a lot of time right now, and I need some stress-free time at home to recover from this cold.

Oh yeah, it’s Tube Top Month. Let’s see if I’ve got any pictures on the phone I can use: 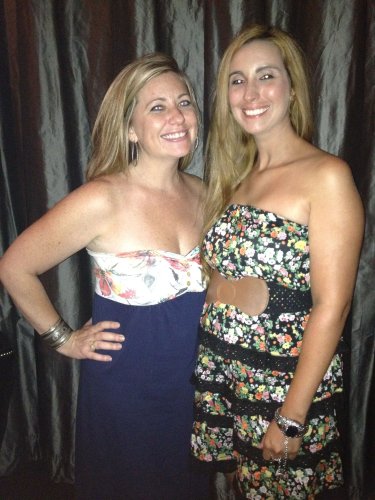 We’re running into a situation where the same people are appearing in tube tops too often on this blog. There’s one week left in Tube Top Month and I need some new subject matter. Unfortunately, I don’t know where I’ll be anytime in the next seven days, other than maybe South Main Trolley Tour on Friday, and almost certainly Pint Nite on Monday. So, I don’t know where to tell people to meet up with the Tube Top Cam and me.

Time to take the iPad off the charger and go back to bed. I think I’ve read everything there is to read about the NBA draft. You know what? I don’t think it would be a horrible move for the Grizzlies to take Will Barton at 25. Practicing with Tony Allen every day would do wonders for his work ethic. I’m not saying Barton is the best pick, just that he wouldn’t be a bad pick.

The really bad thing about getting sick is I had to break my streak of consecutive days at the Flying Saucer last night, ending it at 111. I won’t be there tonight either. Hopefully a new streak will begin tomorrow.