Lansky Bros. is having a Cyber Monday sale on their website today: $50 off any order over $150. You have to purchase via the website; no phone orders allowed. Use code CYBERMONDAY when you check out. Sale ends at midnight tonight.

The event flyer for Reindeer Games, Saturday, December 15 in Court Square, has been posted. Here’s a copy of it. 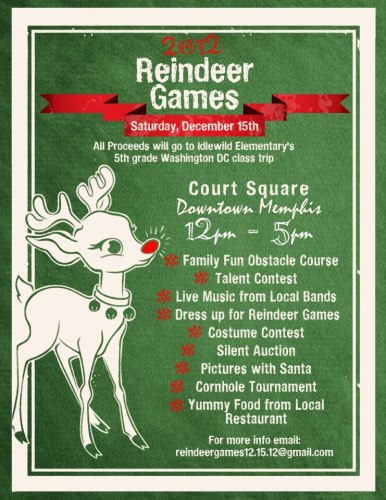 Per NBA requirements, the FedExForum will start hand-wanding all guests for security purposes before 50% of all Grizzlies games through the All-Star Break, and 100% of games after that. This will slow down lines to get in, so if you attend a game please plan on arriving a few minutes early. All three games this week (tonight vs. Cleveland, Wednesday vs. Toronto, Friday vs. Detroit) will use the wanding.

Here’s a look at why I was 45 minutes late to work this morning. It’s not a good thing when you pass the scene of an accident and see that the police have laid a tarp over a car’s windows. That’s a sure sign there’s a dead body inside. I got past the wreck about 8:35 and by 11 they still had not cleared it.

All right, that’s the news, now let’s recap the latter half of the long Thanksgiving weekend. Saturday I was hanging out at the Flying Saucer when several people on adult-sized Big Wheels came in. They had been on Beale Street for the second annual Big Wheel Race, a fundraiser for the Salvation Army’s Angel Tree foundation. WMC-TV has a photo gallery of the race. They told me it costs about $600 to build a Big Wheel fit for adults.

On Sunday I snapped this photo at the Silly Goose: A suburbanite (center) explained to Buddha and Clay how much fun she has at Applebee’s, Chili’s, O’Charley’s, Home Depot, and TGI Friday’s. Apparently we’re missing out on a lot by not living in Olive Branch.

It’s too bad the suburbanite wasn’t at the Flying Saucer on Saturday. A game token was found for one of her favorite hangouts, Chuck E. Cheese. 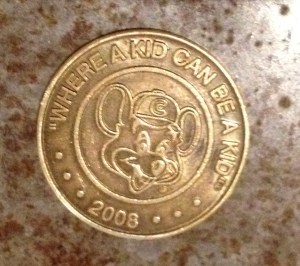 Before I could text the suburbanite and ask if she wanted the token, Tiffany claimed it. 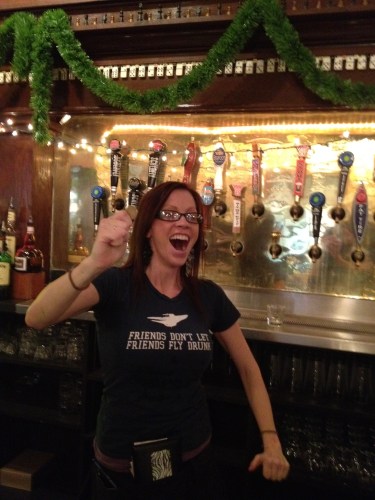 Sunday after stops at Blind Bear, the Goose, and the Saucer, it was time to think about eating. I really didn’t feel like staying out longer, so I ordered a pizza to go from Aldo’s Pizza Pies. Instead of ordering one of the named pies on Aldo’s menu, I decided to go with the create-your-own option. I got an 18″ pizza with extra cheese, sausage, black olives, and mushrooms. As the recently-deceased Mr. Food would say, “Oooohhh it’s so good.” I was very happy with my creation. I ate three slices, and put the rest in the refrigerator for tonight and tomorrow. Considering I get three meals out of it, Aldo’s pizza really isn’t any more expensive than eating out elsewhere Downtown.

Plans for tonight: I’m going to keep with my habit of avoiding the Flying Saucer until after the Grizzlies game starts, since it tends to get crowded with people pre-gaming there. I’ll go to whichever of Blind Bear, Silly Goose, or Bardog looks best on Foursquare/Facebook at the time, then will migrate to the Saucer’s Pint Nite at 7. May be a second news post after work, so check back.