Yesterday about 4 PM I got a notification that I’d been tagged in a photo by Daniel, who owns the Silly Goose. I pulled up the photo and saw that they’d installed a new draft beer tap system at the Goose, including a BEAUTIFUL PBR tap. Well, that pretty much made my decision where to go after work!

Gracie poured me a beer and told me the pricing: Since I was there during happy hour, a pint of draft PBR was $1.50. Had I come there when it was not happy hour, I’d have had to pay the lofty sum of $2, Gracie said. That’s an incredible value and is bound to make me re-assess how much time I spend at each of my Downtown bars. If I can drink PBR at the Goose all day and have a tab of around $20, well, that’s just excellent. Some of my friends have been “value drinking” at other bars for a while now, but I haven’t joined them because I refuse to compromise quality; now I don’t have to.

The other two taps, by the way, were local Ghost River beers. Smart move by Daniel. Those are three beers you can’t get down the street. By the way, let’s see… in the two months that I’ve been “mayor” of the Goose, they’ve got a foosball table and local craft beers and PBR on tap. I must say I’m doing a pretty good job.

My next stop was the Blind Bear, where Jeannette told me they had a special. The Bear has never carried sliders on their menu, because they felt that was the domain of Bardog and Slider Inn. However, a meat delivery got screwed up this week and they got a bunch of 2-ounce burger patties rather than 8-ounce. The only thing they can do is sell them, so they’re running a special of two “cubs” and a side for $6 until they run out. 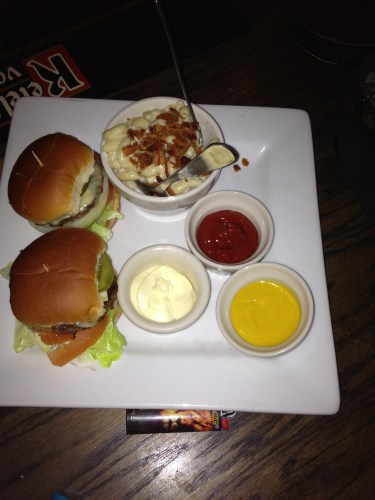 The Blind Bear will open at 1 today for the 1:45 Tigers-Spartans game. Silly Goose and Max’s Sports Bar will also open early. Of course, all the bars that normally open at 11 AM will be open for the game too. As of yet undecided where I’m going to watch it. As usual, I will start at Bardog at 11 with my “DAWG” John D and Panda behind the bar.

Stuff going on today: The Grizzlies play the Celtics at FedExForum at 7; at 8 there’s a night of songs and storytelling with Kate Campbell at the Center for Southern Folklore; the Hard Rock Rising finals I mentioned in a previous post.