Lately I’ve been making an effort to explore all the items on the Flying Fish’s menu. Yesterday afternoon I tried something new. The Hula Poppers are jalapeno peppers stuffed with cheese and shrimp, and then wrapped in bacon. 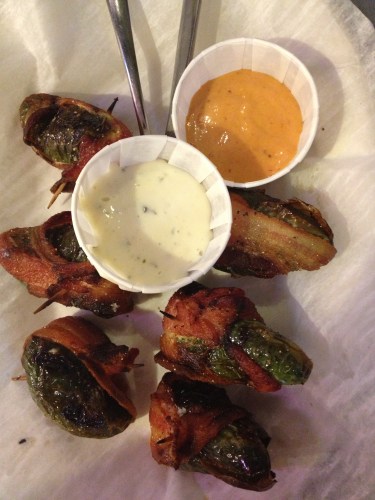 Just about anything wrapped in bacon is a hit in my book, and these were no exception. You get six of them for $8.99. With a name like “hula” poppers, you might expect a tropical ingredient like pineapple or coconut, but the Hula Poppers don’t have anything like that and don’t need it. They are excellent just the way they are. The jalapenos were hot but not enough to overpower the taste of the bacon and shrimp.

Seeing the Hula Poppers as an appetizer, I decided to order an entree too. I picked the jambalaya, one of the few remaining dishes at the Fish that I have never tried. 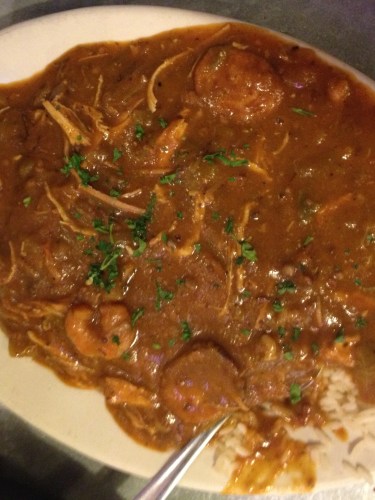 Out came a big ol’ plate of jambalaya loaded with Andouille sausage, shrimp, and shredded chicken. It was pretty good, although thinking back, I wish I’d stirred in one of the several hot sauces on the tables at the Fish. I’m used to the level of spiciness of the jambalaya from Court House Deli, and the Fish’s version didn’t quite measure up. If you’re a fan of the heat, you might want to choose the Gumbo & Grits instead when you dine at the Fish. Their gumbo really has a nice kick to it. On the other hand, if you like milder, tamer dishes, I think you will find the jambalaya more than acceptable.

A fine dinner, and as an added bonus I became “mayor” of the Fish when I checked in on Foursquare. I now concurrently hold six mayorships in the Downtown core, the most I’ve ever had. (Edit: Oops, down to five, I lost Huey’s today.)