It’s well known that I hang out at the Flying Saucer nearly every day, and my beer of choice there is Dos Equis Lager with a few limes. For a while the managers have been telling me, “When you want something different you should try Brooklyn Brewery’s Local 1 and Local 2 beers. They’re a bit pricey but they’re really good.” This week I was in the mood to experiment.

“Which one should I try?” I asked, and got two different answers. Owen, who is one of the managers and who used to bartend the Cordova Saucer, thought Local 1 was better. Drew Barton, who is bartending part-time at the Saucer while he opens Memphis Made Brewery on South Cooper Street, prefers Local 2. “You don’t drink a lot of dark beers, though, so maybe you’d like 1 better,” he said after thinking for a minute. So I went to the UFO Club computer and printed off a ticket for Local 1. 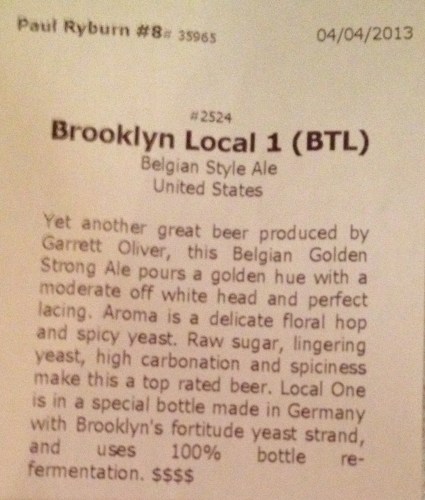 I probably can’t do a better job describing it better than the description in the Saucer’s computer, so I just took a photo of my beer ticket for you to read. (If you’re wondering why it says “Paul Ryburn #8,” it’s because I’m working on my 8th plate on the wall.) This beer was delicious and I enjoyed every sip of it. It comes in a large 25 ounce bottle.

Yesterday I decided to try the other one. “I may not like it as much as Local 1, but it still seems to be highly acclaimed by everyone who has tried it,” I reasoned. “And at any rate, I’ll knock out another beer toward my next 200.” I printed out the Local 2 ticket. 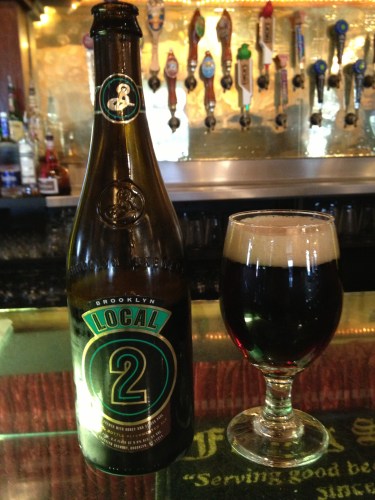 The verdict: Local 2 was every bit as delicious as Local 1! It’s a much different taste, of course, but it tasted nothing like the porters and stouts I usually shy away from at the Saucer. As the ticket says, there are hints of chocolate and dark fruits. A thoroughly enjoyable beer!

If you prefer to try these at home, you’ll have to go to liquor stores to find them: Both are well over the 6.0% threshold that separates beer from liquor by state law. If you drink these while you fly the Saucer, keep in mind that large bottle + high alcohol means that you probably shouldn’t drive home right after drinking one of these.

After having both, I agree with the managers and Drew: When you’re in the mood to step up and try something a little bit nicer than your usual beers, Local 1 and Local 2 are good options.