If you like to run in the Breakaway Bardog 5K to raise money for St. Jude, you can now follow the race on Twitter at @BreakawayBardog to keep up on news on the race. Race date is Sunday, August 18, followed by Bardog’s 5th birthday party.

The BBC recently asked residents of Stockholm, Sweden what they loved about their city. They responded in pictures. I figured this is worth a post since Sweden is Memphis in May’s honored country, and BBQ Fest teams might be able to get some ideas for booth design.

The Church of the River will have “Sweet on Sweden,” a fundraiser beginning at 5:30 tonight featuring food and drink from Sweden. There will also be an auction. Tickets are $20-25.

Bad news for Downtown: Raymond James laid off 160 people, 18 of them from the Memphis location. Now that RJ has acquired Morgan Keegan, they are consolidating operations.

More bad news for Downtown: A dispute over parking in the spaces on Court between Front and Riverside led to a pistol-whipping. Before people start going, “see, this proves Downtown is unsafe,” note that the assailant was apparently visiting from Georgia.

Andrew Yurkow plays the Flying Saucer for Acoustic Friday tonight. Start time is 9 PM. In other Saucer news, my friend Chad hit a milestone last night. He went to the UFO computer and was notified that he’d finished 200 different beers. It printed out a ticket redeemable for a free plate party, with $100 tab, compliments of the Saucer. 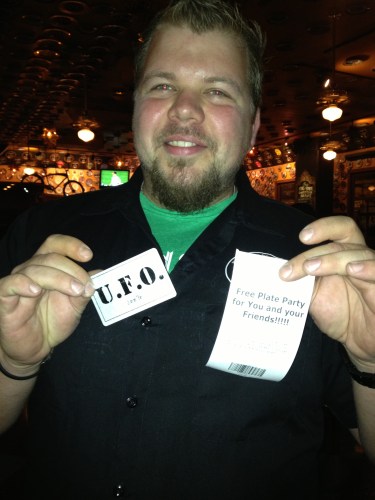 That’s it for now. Will be out tonight about 5:45. I’ve been invited to dinner at Hooters followed by pool at the Absinthe Room. I’m skipping the Hooters portion of the evening though.