Servers in the Memphis area are finding super-generous tips being left, along with notes explaining why. The tips are random acts of kindness that are part of Operation Tucci, in memory of David “Tucci” Santucci, a male nurse who recently died in a senseless murder in the South Main area.

There is also a Tucci Foundation that is being set up as a 501(c)(3) nonprofit in Tucci’s memory.

There have been a rash of wheel thefts reported Downtown. I first heard of this a week ago when a friend who lives in River Row found her car up on blocks, with all four tires removed. This past weekend it happened to another friend of mine who lives in South Bluffs (a gated community!), the Bardog delivery vehicle while parked in a garage at Front and Monroe, and several others. With the right tools it’s possible to remove a car’s wheels in 30 seconds.

We’re done with baseball at AutoZone Park this season. The Redbirds lost the season finale, and as a result will miss out on the playoffs.

On to better news: There’s a new website, main2main.com, where you can keep up with news on the Main-to-Main project connecting Memphis and West Memphis.

The Peabody is hosting a special dinner on Saturday, August 14, to celebrate the 375th birthday of Dom Pierre Perignon, the spiritual father of champagne. The 7 PM dinner will have a four-course menu and of course, Dom Perignon. $85 per person, plus tax and gratuity. Call 901-529-4188 to make reservations.

A fun Memphis Music & Heritage Festival weekend has come to a close. I wish I had gotten out to see more bands, but it was just so damn hot. A server in a nearby bar asked me if I thought they’d get a lot of business from the festival. “If it’s 80, your bar will be dead because everyone will be outside,” I replied. “If it’s 95, you’ll be busy.” It was 95. Sunday evening after the sun went down, I finally got outside to hear the Swamp Katz: 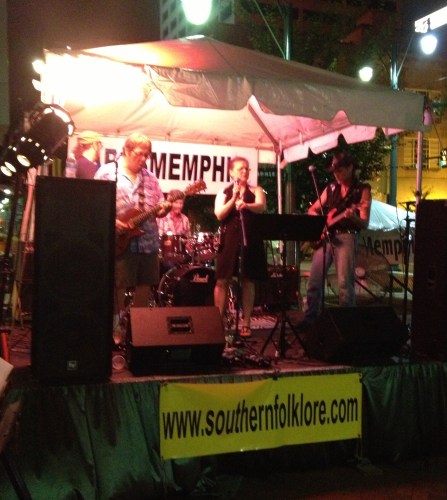 The Swamp Katz play classic rock and have a new album out. They play frequently at the Center for Southern Folklore and also the Brass Door.

I hear I missed some shenanigans at Blind Bear while I was outside though. I commented yesterday that Downtowners need a “where’s the shitshow” smartphone app so we don’t miss anything.

Yesterday I tried the two new local Wiseacre Brewing Company beers at the Flying Saucer. It was the first day on tap for both the Tiny Bomb and the Ananda IPA. 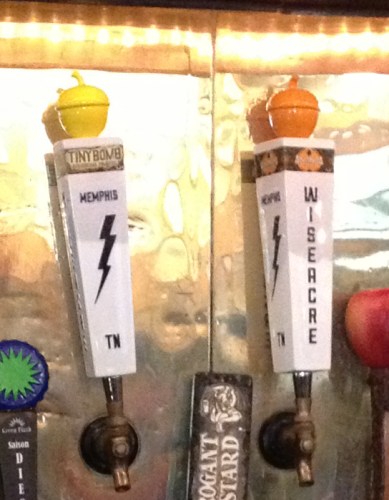 Both were outstanding. Descriptions of both beers, from the Saucer’s UFO computer, are below (click to see the image in a larger size). 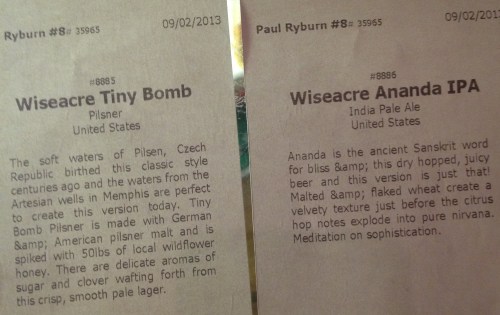 I had the pleasure of having a beer with a retired Navy SEAL and his wife at the Saucer, whom I met at the Blind Bear and decided to come over with me. He had some great stories. Thank you for your service to our country, sir.

That’ll do it for now. Out at the usual places after work, including Blind Bear poker at 8.