Happy New Year’s Day, or as I call it, Professionals’ Day. This is the day when all the pros go out for some day drinking and discuss what happened last night on New Year’s Eve, or Amateur Night as we call it. Who puked? Who got in a fight? Who broke up? Who hooked up? Who peed themself, or worse? Who decided to experiment and find out what gay sex is like? Who got a DUI? Who fell off their bar stool? Who lost their phone? Who spent the night crying uncontrollably? Who got thrown out of the bar? Who had sex in the bar restroom? Who got so drunk that they forgot where they parked and reported their car stolen? Who got so drunk that they tried to pay their bar tab with a Home Depot gift card? Who got hungry and passed out in the booth at Denny’s? Who left their panties in the alley behind Local? Inquiring minds want to know!

(credit to Robo for his contribution to the paragraph above)

One of the first things I do on New Year’s Day is check the Shelby County “Who’s in Jail?” page, particularly the Recent Bookings tab, to see if I recognize any of the names. So far so good this year.

Work let us go at 3 yesterday afternoon, and I hurried Downtown, with enough time to get a couple of beers in at the Flying Saucer before they threw everyone out at 5 to decorate for their Amateur Night party. While there, I noticed this sign hanging over the urinals in the men’s room: 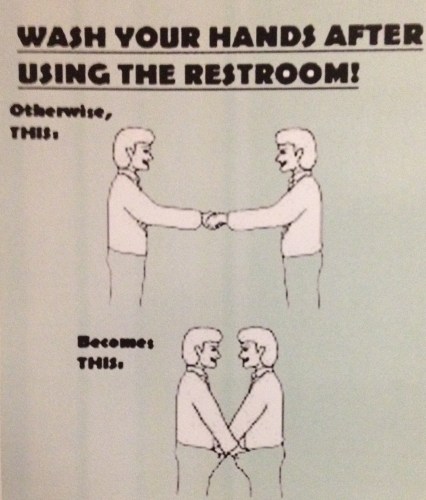 Don’t forget to wash your hands! By the way, that’s some nice ca. 1985 Jermaine Jackson hair on the two dudes in the image above.

When the Saucer kicked us out at 5, I had a decision to make. Stay out and try to make the best of Amateur Night/New Year’s Eve, or just go home? I had two offers of things to do. Some of my friends had room at the table they reserved at a bar in the Downtown core. It’s one of my favorite places to go, but it’s also a place where the type of behavior I described in the first paragraph has a high probability of happening on NYE. So I decided to pass on that one, although I appreciated the offer very much.

Another option was South Main. “We’re going to meet up at Max’s Sports Bar at 6 to watch the Tiger game,” one of my friends told me. “Then we’re going to figure out New Year’s Eve from there. We’ll probably do ‘the triangle’ – Max’s, Double J, Earnestine & Hazel’s.” All of those places would be considerably more low-key on New Year’s Eve than the high-profile bars in the Downtown core. I decided to at least watch the Tigers at Max’s, and then consider my options for staying out.

It was the Tigers’ first in-conference game in the American Athletic Conference, and South Florida was the opponent. The Tigers got an 88-73 win and looked strong, with dunks and threes all over the place. Pastner’s strategy of getting deflections seems to be paying off. Joe looked strong. Geron Johnson was on fire. Shaq is going to be wearing a NBA jersey by the end of 2015 if he keeps improving at the rate of the past six months. They need to learn to stay out of foul trouble a little better before they play marquee conference games against Louisville and UConn, though. It’s acceptable for Nichols to get into foul trouble because he’s young. The others need to play smarter in that respect. I continue to think 300-pound Dominic Woodson has a lot of untapped potential, and if he works hard I hope Pastner gives him a chance. Next game is a home game against Cincinnati at 11 Saturday. ESPN2 will carry it.

After the game, I stayed for one more PBR, but then decided to call it a night. Max’s/Double J/E&H sounded like a plan and I would definitely have had a good time with the company I was in, but I didn’t want to deal with the walk home, the first 8 blocks of which would be on Main Street which would be crawling with traffic by that time. Remembering how people celebrate by shooting fireworks and sometimes guns out of their car window, I decided I didn’t want to deal with it. I walked up to the Butler Street trolley stop about 9.

The trolley driver recognized me. “Hey man, it’s good to see you on my trolley!” he said. “I see you walking up and down the street all the time, but I never see you ride. It’s good to have you on here.” I appreciate friendly trolley drivers. My last conversation of 2013 was a good one. I got off at City Market and got enough food for last night and today. Since I enjoyed Nikki’s Hot Ass Chips last week, I decided to pick up a bottle of Hot Ass Seasoning to take home. I ate and was in bed well before midnight, and slept through “WOOOOOOOO!!!!!” and fireworks outside.

You know the little Outlook notification box for new email that comes up in the bottom right corner of your screen? That showed up I had in dreams I had a couple of times last night. I could have done without that.

A friend of mine called a bartender at Bardog last night to ask what time they would be open today. She said 8 AM. I won’t be there that early, but I will be there around noon or 1 and invite the other Downtown professionals to join me. In the event that it’s not open, I’ll be at Aldo’s Pizza Pies bar which I know for sure is open. I think Kooky Canuck is open too. At 5 I will walk over to the Flying Saucer when it opens, and then at 6:30 I will play in the special New Year’s edition of the Blind Bear poker game. Happy New Year everyone!