The Commercial Appeal broke some huge news yesterday: Race for the Cure, for many years a staple out in the ‘burbs, may be moving Downtown this year and there are plans for the race to double in size. That would be a huge get for Downtown if it happens, and would certainly stimulate the economy, with people coming from out of town staying in hotels and people eating in nearby restaurants after the race. I’d link to the story but they’ve moved it behind the paywall.

I polled local restaurants and bars on Facebook yesterday as to whether they would be opening later than usual on Sunday, which is Easter. Results I have so far:

Last night was an old-school night for me: I went to Pint Nite at the Flying Saucer at 5:45 and stayed until a few minutes after midnight. While watching the Grizzlies and talking BBQ with a Squeal Street member, I overheard one of the bartenders say something about new menu items. Later in the evening I grabbed a food menu and noticed many new additions:

I decided to give one of the new items a try, deciding on the IPA Mac & Cheese. 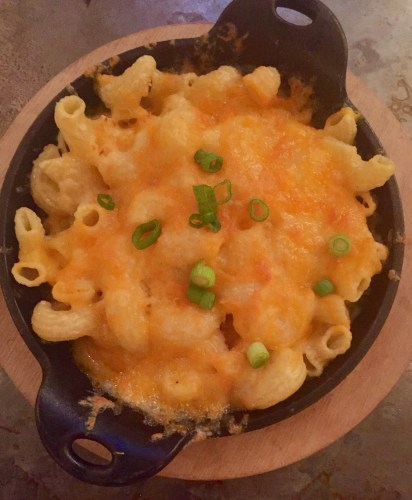 The bartender told me it is made with local Wiseacre Ananda IPA. There isn’t a hoppy taste at all, as you might expect since it’s cooked with IPA, and that’s a good thing. However, it does have a bit of a kick to it. You know, growing up I was not a fan of mac & cheese at all, and never ordered it, and I still don’t order the garden-variety version of it. It was only a few years ago when chefs started getting creative with the dish that I got into mac & cheese. I enjoyed the Saucer’s take on it, with the mac not only in a cheese sauce, but with cheese baked on top. Definitely something I would consider getting again.

One of the bartenders had the grilled cheese & tomato bisque and said it was really good (I handed her a napkin, because it looked like she got some butter on her face). Jim told me that the green chili pork stew is good if you like spicy food. I do, so that may be what I try next.

SUPER COOL: If you go to Google Maps and get to an overhead view, a Pac-Man button will appear. Click it and you can play Pac-Man on Google Maps, on the streets of your own neighborhood or any neighborhood you choose. (I almost led off with this item, but then realized hardly anyone would stick around to read the rest of the post)

Tin Roof on Beale is staffing up for a probable opening soon. They are also putting out a call for live bands.

Really having a good time following the Facebook posts of my friends who are at the bar and nightclub convention out in Vegas. Panda got to see Jon Taffer and the entire Bar Rescue staff. Now those are some people I would love to meet. Wilbur had “Club 152, Louisville KY” printed on his badge. “They moved the club to Louisville and no one told me.”

From Newsweek: Is poker a game of luck or skill? Statistical analysis revealed that over about 1500 hands, skilled players will do better than unskilled players three-fourths of the time.

The Tigers baseball team hosts Ole Miss tonight at 6:30 at AutoZone Park. Ugh. I was going to lead off at Flying Saucer again tonight, but it will likely be full of douchebags in red and blue doing that Godawful “Hotty Toddy” chant. I will lead off elsewhere and move my Saucer stop to after the start of the game. Most likely not playing Blind Bear’s Tuesday poker game tonight, although I may stop by for a bit.