Last night I was bored, playing around on my phone, looking at Facebook. Several of my friends on there had just taken a “Which dog breed are you?” quiz. That quiz intrigued me because I have never been a dog owner – I have nothing against them, just never had circumstances where owning a dog would make sense. So I figured, this is a test I can take bias-free. I have no preferred breed.

I answered the 10 questions, and a fluffy, white, well-groomed POODLE appeared on my phone’s screen. I didn’t have a particular breed to aspire to, but that is certainly not the one I expected as the result! There were several paragraphs explaining why I am a poodle, but to boil it down to one sentence: “You are smart and social, but you prefer to lie around and let others do the hard work.” I can just imagine the BBQ team’s reaction. “Yep! He’s totally a poodle!”

I ran into local poet IQ last night and he told me there is going to be a poetry slam a week from today, Wednesday, July 1, in the downstairs of the Brass Door from 8 to 11 PM. It will be your last chance to catch IQ before he heads out of town.

South Main Sounds at 550 S. Main is having Singer-Songwriter Nught #9 this Friday evening in conjunction with South Main Green Bus Night. Local talent will sing original tunes. The lineup includes Kenny Hays, Christine Conley, Evan Farris, Frank McLallen Sr., Stephen Sciara and Maria Spence. Green Bus Night happens from 6 until 9 or later in the South Main District the last Friday of the month, with many of the shops staying open late, some offering free cocktails, beer, wine, and/or appetizers and some stores having Green Bus Night discounts. (Note: Some people refer to it as Trolley Night)

Today was supposed to be cutoff day for 100 N. Main. If the owner of the tallest building in Memphis could not pay the $86,000+ he owed MLGW, power was going to be cut. However, local hospitals have critical communication equipment atop the building, and shutting off electricity could affect life-or-death situations. The hospitals made a deal with MLGW which gives them a month to get the equipment moved.

There’s an Old World Wine Dinner at Spindini tonight at 7. Reservations are required.

Here’s a pic of that new hot dog pizza from Pizza Hut that I mentioned the other day. The outer crust of the pizza is mini-hot dogs. I’m not saying I think this pizza is a good idea, but if you have a 9-year-old they’re probably going to want one.

Gmail now has an un-send feature. You can recall a sent email message within 30 seconds. How I wish text and Facebook Messenger would implement these features.

Well, I guess it doesn’t matter for Facebook Messenger anymore. At least not for me.

Seriously, though, I’ve learned something recently. Use Evernote as a staging ground for texts and PMs. It gives you a chance to refine your message, as well as think, “Is sending this a bad idea?” This won’t eliminate all your drunk, stupid messages, but it will minimize them at least.

A friend of mine has a lost dog, missing for several days, lost near Macon and Dent and recently seen in the area of Mt. Pisgah Middle School: 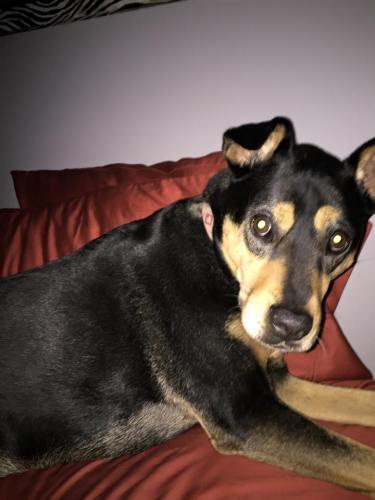 I don’t know how many Cordova/Eads readers I have, but if you see her in this area, she answers to “Bella” although she is a little shy. This is a long shot, but over the years I have reunited 3 lost dogs with their owners using this blog, and none of them were Downtown. Let’s see if we can make it 4. Email me at paul@paulryburn.com if you have the dog or information on where she was last seen, and I will pass it on to the owner.

Here’s a really funny website about parking at the Memphis Zoo.

The Moody Ques wanted me to run a contest on this blog, but I have decided to defer it for a week because two of the team leaders will not be in town to discuss the responses. Look for the contest in early July.

Sigh. Another story about animal abuse at the Memphis Animal Shelter. A cat this time. One of the reasons I will not be voting for A.C. Wharton this time around.

Kevin Cerrito has a first look at the menu of The Lookout, the restaurant at the top of the Pyramid.

I’m leading off at Silly Goose for happy hour after work. I’ve been drafted to play Blind Bear trivia at 8, so that looks like the lineup for tonight. Too damn hot to go anywhere for lunch, so I guess bacon jerky and trail mix is the lunch plan for a second consecutive day.