Yesterday morning I led off at Bardog for Panda Time (Saturday brunch) as usual. Numerous groups had to be turned away because they had kids with them; for those not familiar with the law, bars and restaurants have to be 21+ if they allow smoking, which Bardog does. They always recommend sibling restaurant Aldo’s Pizza Pies around the corner to groups that have people too young to be at Bardog. That’s an excellent suggestion and I will add a few more: Irish pub the Brass Door, beer garden the Flying Saucer, Canadian-themed restaurant Kooky Canuck, perennial burger award winner Huey’s, South Main neighborhood bar the Green Beetle, and the downstairs of saloon and steakhouse Double J.

When Kobe Bryant played his final game in Memphis this week, he gave Grizzlies guard/forward Tony Allen a pair of shoes signed “to the best defender I ever faced.”

Food recommendation: The Reuben wrap with spicy Thousand Island dressing on the top shelf of the grab & go at City Market. I had one for the first time Friday night and it was delicious.

Vote in this poll: If the Big 12 does expand, which two schools should it add?

I had several hard-core right-wing Republicans read my endorsement of Bernie Sanders yesterday and tell me, “Paul, it kills me to admit this, but your story of the smart kid who grew up in a bad part of town deserving the same opportunities as you… I find it awfully hard to disagree with that.” Cheers to my intelligent, well-spoken Republican friends. We may not pull the same lever in the voting booth but we both want what’s best for our country. I’m friends with many Republicans who post their political views on Facebook and I appreciate and respect your opinion, even if I don’t agree with it.

Unfortunately not all Republicans are intelligent and well-spoken. Pat Robertson, who by the way has endorsed Donald Trump, has proclaimed that people shouldn’t practice yoga because it will lead to them speaking Hindu. Never mind that Hindu is not a language. Stretchy exercises are cool, Robertson says, but chanting “Hindu” words is not cool because it can lead people away from the Christian faith. The sad thing is, there’s 12-13% of the population that will blindly believe everything Robertson says and fall off the cliff like lemmings. If you read the linked article and find any validity to Robertson’s claims, I have three words for you: YOU ARE STUPID. End of story.

From GQ: Just in time for President Trump, Canada introduces a bill that would make it easy to move there

Yesterday afternoon I was hanging out with my friends Tony and B-RAD at the Blind Bear. They wanted to go to South of Beale to visit former Bear brunch bartender Kaylea at her current job. I am always up for some Kaylea harassment so I came along. I was hungry so I got their hot dog special of the day with gator sausage. 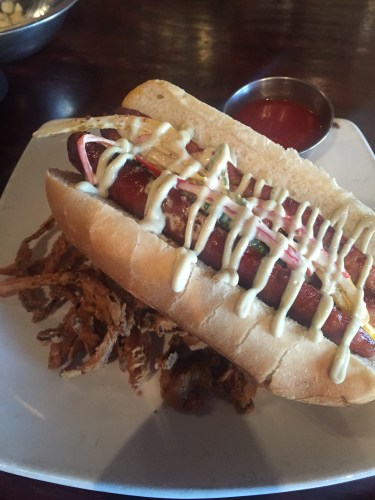 I cannot describe how good this thing was, and the fried onions on the side added to the flavor perfectly. South of Beale is a place that needs to be on my radar more often for food. I have never had a bad meal there.

Later in the evening I was back at the Bear, hanging out with former Saucer girls Brittney and Whitney: 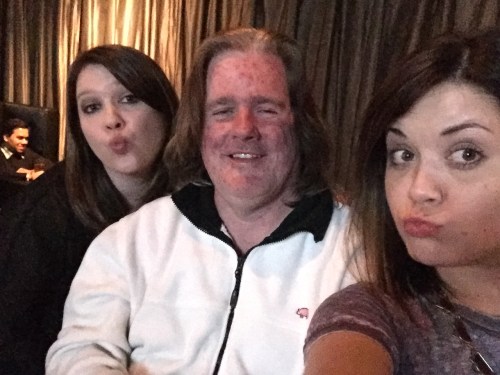 Also at the Bear, I revived a four-year-old “you need to wear more tube tops” conversation with one of the regulars.

I didn’t get to see the game, but congrats to my Hogs on their 75-65 win over the Knoxville Predators (UT) last night.

Time to get this day started. D-RANKS with “vocal” B-RAD at Blind Bear is first on the agenda today, followed by a trip to see Suzy bartending at Bardog. Back tomorrow (or maybe later today, who knows) with more news.