Construction of the outdoor deck at The Dirty Crow Inn is now complete. My buddy Bones texted me a photo: 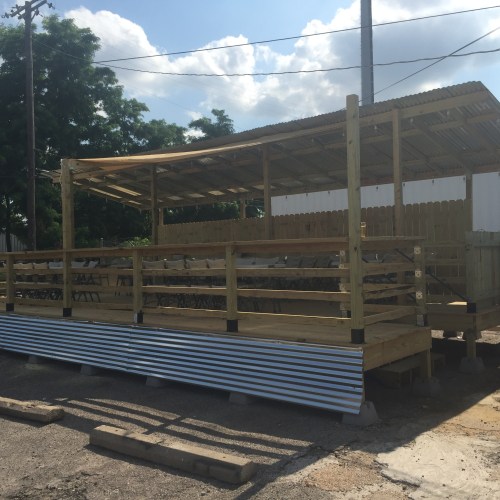 “My blood and sweat is on every board,” Bones texted me. Don’t forget that Davis Coen plays the deck tomorrow night from 9 to 12.

The Church Health Center’s cooking blog, Stalking Celery, has a recipe post for stuffed bell peppers from their farmers market. Yum, I have loved stuffed peppers ever since I was little! You can stalk celery, bell peppers, and lots of other fresh vegetables at their Tuesday farmers market from 10 AM to 2 PM. The market is at the CHC Wellness Center, 1115 Union.

Led Zeppelin has won a copyright infringement suit claiming that they plagiarized the intro of their 1971 mega-hit “Stairway to Heaven” from a 1967 song.

Seth from Best Memphis Burger tweeted a hidden gem of a burger Downtown: The Tandoori Chicken Burger at the Hard Rock Cafe. He called it “a delicious force to be eaten” and said he wished he had known about it sooner.

A friend who attended the first lunch day at the Silly Goose posted the sandwich menu. You can choose from the Club, Italian, Pastrami, Stuffed Portobello, and Silly Philly. Sandwiches are $9.

Those who know me know that I am not much of a movie person at all. I almost never go see them and am worthless to my trivia team when movie questions are asked. However, I have to admit, I kinda want to go see The Secret Life of Pets. The promos look hilarious, and it’s based on a real-world premise – “I wonder what our pets do when we’re not home?”

Bluff City Coffee has added a couple of savories to their pastry case. New are the turkey pesto roll and the cheddar bacon scallion quiche.

“She’s not a consumer. She just likes to use the police as her personal taxi service.”

The Casual Pint, a craft beer market and bar, will open at 387 S. Highland this fall. As my friend Gary is fond of saying, BEER!

For those of you who followed C.M. Punk’s career in WWE, the date of his first mixed martial arts fight has been scheduled. Punk will face Mickey Gall at UFC 203 on Saturday, September 10.

That’s all for now. Off to work. Possibly another post later.