Readers, I have an important announcement concerning Pokemon Go this morning that I went out and found just for you.

Here are instructions on how to give up on Pokemon Go and cancel your account.

It sounds nearly as complex as canceling your Comcast account, surprising when you consider it’s just an app on a phone. You have to respond to an email, and after that it still might be a week or two before your account is deleted. Still, though, now is not the time to procrastinate; the sooner you start the process, the sooner you will be free from the world of trainers and gyms and XP and Pikachus.

On to the news… Let’s Roll into Watermelons at the theme at the Memphis Farmers Market this Saturday. It’s the Market’s annual watermelon roll for the kids. Kids 8 and under can sign up at the Market’s information table at the front of the pavilion, with the first heat 9 AM and second heat at 9:30. Winner gets to keep their watermelon for free! There will be a food demo by the UT Extension of Agriculture at 10, 10:30, and 11, with cantaloupe salad being the dish this week. The Master Gardeners are back this week to answer your questions from 10 to noon. Stretch your boundaries with a free class from Downtown Yoga from 10 to 11 (bring mat and water). Live music by S. Smith 8 to 10:30 and Triumph of the Wild 11 to 12:30. The Market happens every Saturday from 7 AM to 1 PM, under the pavilion at Front and G.E. Patterson. Don’t forget to check out the food trucks in the back!

My friends SNOZberry play Club 152 tomorrow night, Friday the 29th, from 7 to 10. This is the first time SNOZberry has played the club in several years and I know they would like to see all their fans.

KIX on Beale featuring Josh Abbott, scheduled for tonight, has been canceled. They plan to reschedule.

Justin Timberlake has thrown his weight behind the Memphis to the Big 12 movement.

The Memphis Made taproom will only be open 1-4 this Saturday. After that they will close for a private wedding reception.

The Smithsonian is looking to hire a person to taste and research beer to document the history of craft beer in America. Pay is $64,000 a year. Several people have suggested I apply, but let’s face it, I would mostly document PBR. Paging G-Rock, this might be a dream job for you, and you certainly are overqualified if anything.

U-Haul has bought a building at 137 West Illinois and is converting it into U-Haul Moving & Storage of South Bluffs.

Best Memphis Burger Fest is one month from today, Sunday, August 28 at Tiger Lane. The Moody Ques will be competing for the second year in a row. I hear that our friend Katie from DC is coming to visit that weekend, so we’ll save a veggie burger for her. Not only does our team make the best burgers, but we have the best vegetarians as well! Vegetarians love the Moody Ques!

Don’t forget that there are spots open to the World Food Championships for the top-performing teams at Burger Fest. To use a poker term, we are looking at Burger Fest as a satellite. We had a cooks’ meeting last Sunday and are in it to win it this year. How awesome would it be if the Moody Ques, Squeal Street, and the Fabulous Burger Boys emerged as the WFC qualifiers…

There are some front office positions open at Opera Memphis.

The Memphis Flyer has an article about Ghost River’s soon-to-open taproom. With the taproom, Loflin Yard, and The Dirty Crow Inn, the far south end of Downtown has really blossomed with entertainment options this year.

I think I’m gonna start putting an umlaut over Trümp when I write about him, to remind myself and my readers that we will be part of the Trümpreich next year if we don’t vote well this fall. (In other news, this blog may come to an end in March 2017 when I am assigned to a re-education camp.)

Working from home today, so I walked over to the Food Truck Rodeo at Court Square. Superman Roll from Sushi Jimmi for lunch! 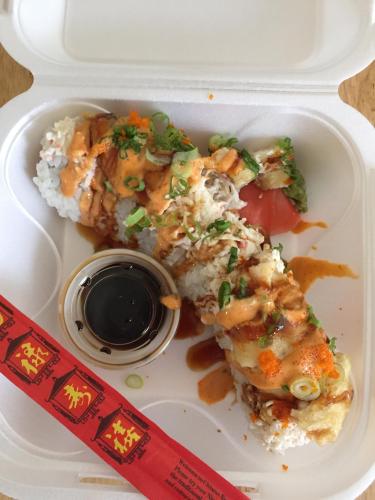 Time to get back to work. I’ll be out at the Silly Goose after work, probably doing House Fireball shots in order to be able to deal with the Pokemon players in there. Back later today or tomorrow with more news.