A lot of people will be watching the Tigers in the Boca Raton Bowl tonight, but what if you’re more of a movie person than a sports person? Come to the Orpheum. It’s a Wonderful Life will be on the big screen, and it’s a fundraiser for the Mid-South Food Bank.

Free Grizzlies giftwrap to the first 5000 fans in FedExForum this evening. The Grizz play the Boston Celtics tonight at 7.

Yet another reason to come to the game tonight: 1st 5,000 fans get 🎄 Wrapping Paper presented by @MercuryPrinting! pic.twitter.com/g1F2LydJRL

If you prefer to have someone else do the cooking for your holiday dinner, you’re in luck: Felicia Suzanne’s Restaurant has extended orders for Operation Holiday through tomorrow. They prepare favorites like deviled eggs and Sunday Sugo, and you pick them up and serve them.

Loflin Yard is having a Holidance Party with DJ JD Friday from 10 PM to 1 AM.

If you’ve read about the deep-fried Cornish game hens served by the Flying Sobie’s food truck for brunch at the Ghost River tap room, but have not made it down there yet, you need to check out this post by Holly: 6 Things to Eat in Memphis Right Now. Number two is the game hen and waffles and she has a photo and more details about what you get.

Great article on ABC News: The Grizzlies sit atop Clutch Mountain. They are confounding John Hollinger’s own model for determining what stats indicate a top team.

The first trailer for “Sun Records” (formerly “Million Dollar Quartet”) has been released. The show, filmed in Memphis, premieres on CMT on February 23.

As a former college algebra teacher, I find this amusing: An algebra teacher was disciplined for an inappropriate lesson. Parents of two 14-year-olds complained when their kids were given problems like this one: “Tony can send 5 texts and 3 nudes in 19 minutes. He could also send 3 texts and 1 nude in 9 minutes. How long would it take him to send one text and one nude?”

A GoFundMe page for a parade has has exceeded its goal. If the Cleveland Browns lose their two remaining games, a fan wants to organize a “Perfect Season” parade to celebrate their 0-16 record.

This makes me angry: Team Bernie knew months before the election that Hillary was going to lose the swing states of Michigan, Wisconsin, and Pennsylvania. They reached out to the Clinton campaign and offered their help, knowing they had the skills and grassroots cred to connect with critical voters who would keep those states blue. The Clinton campaign blew them off, belittling former Bernie supporters and treating them like a circus sideshow. Damn. Hillary deserved to lose the election. The hubris and the sense of entitlement among her staffers is just mind-blowing.

Beale Gives Back has announced the next recipient of its program to distribute a pool of money from Beale Bucks that went unused: The Memphis Police Department. There will be a ceremony Thursday at 2 at Handy Park to present the check.

I haven’t totally decided where to watch the Boca Raton Bowl tonight, but I am leaning in a direction. Normally my home away from home on the south side, Max’s Sports Bar, would be my call, but due to the cold weather I don’t know if I want to be that far away from home. So I’m leaning in the direction of the Silly Goose, with enough TVs to comfortably show Tiger football and the Grizzlies at the same time, and craft cocktails by Hanin. 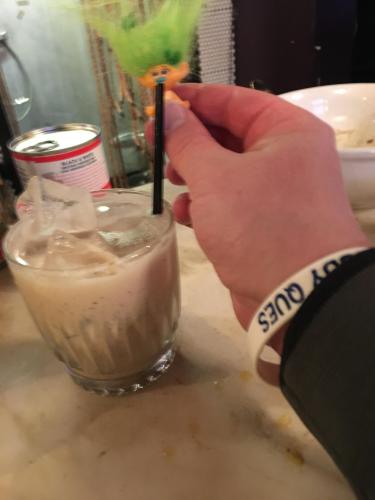 Here’s a photo of the hand-crafted Irish Cream Hanin made last week. It is troll-tested and troll-approved.

Back tomorrow with more.