A new restaurant serving Southern fare called Cafe 7/24 has opened in the former Rehab Disco space at 94 S. Front. The restaurant serves southern classics like ribs, catfish, and fried chicken, as well as sides like fries, baked beans, okra, and mac & cheese. I don’t know if I have any vegetarians who read this blog, but on the off-chance that I do, I will mention that the people who run Cafe 7/24 have said they plan to expand the menu to have more vegetarian offerings. The restaurant has three levels and two bars, which is pretty ambitious considering it is on Front Street, off the beaten path to most who don’t work at AutoZone. They are currently serving lunch and will expand hours to 11 to 8 starting January 2.

Celebrate the New Year… as it arrives in London, at the Ghost River taproom. Make London Calling the first stop of your New Year’s Eve. The taproom will be open noon to 8 that day, and at 6 PM, when 2017 comes to London, everyone in attendance will get a 4 oz. pour of Ghost River London Pale Ale. The Memphis Mojo Cafe food truck will be on site with sliders, burgers, and fries.

‘Tis the season to send Memphis Grizzlies holiday e-cards to your friends. They are free to send and you get your choice of Mike Conley, Marc Gasol, Tony Allen, Zach Randolph, Vince Carter, Chandler Parsons, or Grizz. You can share them to social media too.

LYFE Kitchen, the healthy dining restaurant in the Chisca at Main and MLK, has closed for a “transformation” and will re-open in the new year. Really, I think one small but significant change would make a world of difference at that place. Just offer a “wrap any menu item in bacon for $3 more” option.

Congratulations to Memphis Made Brewing Co., which has been named a Bicycle Friendly Business by the League of American Bicyclists. The brewery has installed a bike rack outside, and has arranged to have a mobile bicycle repair station located nearby. The brewery has worked with Revolutions, Bike Walk Memphis, the Memphis High Tailers Club on fundraising events. Going forward, Memphis Made will have a variety of tools and technical assistance from the league to become even more bike-friendly.

One of the best BBQ teams at BBQ Fest, Victory Lane BBQ, is having a sale on its famous rub through Christmas. Use code JOLLYRUB at checkout.

Weird weather day. I can normally see South Main out my living room window. Not today! 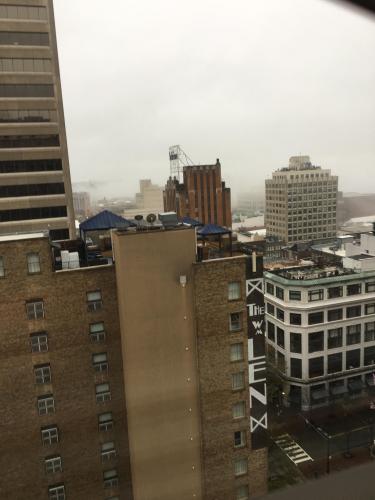 That’s all for now. Possibly back tomorrow with more news, if not then, Monday.