Wednesday night, I was in the mood for a late-night snack, having had a light lunch and no dinner that day. I remembered that Belle Tavern had several new menu items, and decided to give one of them a try. In the mood for something hearty, I ordered the burger sliders, three of them for $12. 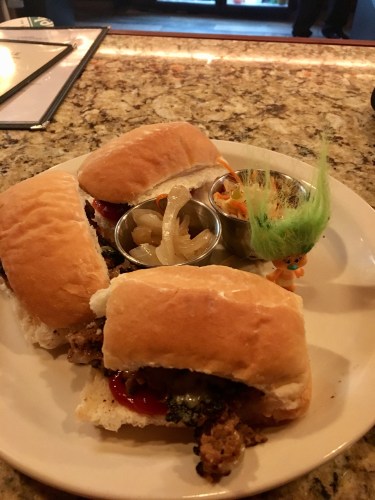 These are not just your typical sliders. When I think of burger sliders, I tend to think ground beef shaped into a small patty. When they came out, I was pleasantly surprised to find thinly shaved loose beef on my three sandwiches. It was a nice touch that felt like a bit of an upgrade.

Also, when I think sliders, I think of small square buns. These came out on what appeared to be half hoagie rolls. Again, a different take on the slider that makes the dining experience feel a touch more upscale.

The beef, which was quite juicy, came on the rolls with white cheddar and ketchup. On the side were cups of caramelized onions and Southern chow chow. My troll was especially a fan of the chow chow, so much so than when I got ready to take a picture of my food, she jumped onto the plate. Definitely don’t miss out on adding these delicious sides to your sliders! Try them separately or together, they’re good either way.

$12 is the upper end of what bars can reasonably charge for sliders in Memphis, but in my opinion Belle’s sliders are a good value for the price. They will satisfy your appetite even if you come in hungry, and they are a step above the average burger slider.

Thursday night I went back for happy hour. I had been advised I should ask Chris to make me a caipirinha, the national cocktail of Brazil. I’m not normally a mixed drink person, but that was good! “If you like margaritas, you’ll probably like caipirinhas too,” Chris told me. “Cachaça (the main ingredient) is similar to tequila.” I got that from the taste, for sure. However, because the caipirinha is made with sugar cane, the taste is primarily sweet rather than sour. 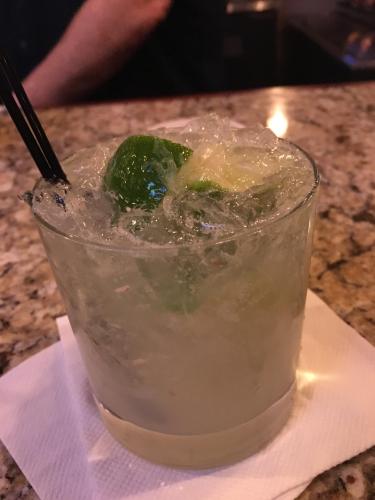 For those of you who haven’t found the place yet, Belle Tavern is in the alley running from Main to Second half a block south of Union. Open 4-1 Monday-Saturday and noon-10 with brunch noon-3 on Sunday.