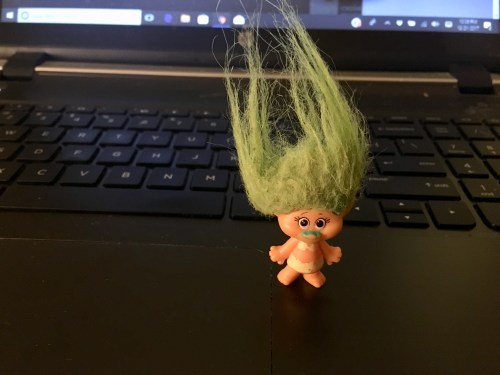 Quick post before 8 AM. I’m going to work from home today to avoid having to drive in heavy rain. My adorable but useless assistant will be helping me.

Everyone’s got their mind on the holidays this weekend, but here’s something to keep in mind: The International Blues Challenge is less than a month away, January 16-20. Solo artists, duos, and bands representing the very best in blues flock to Memphis and play in the clubs on Beale and the surrounding area, hoping to win their category and attract interest from record producers. However, if you check out the schedule, you will see there’s a lot more than just music performances: book signings, keynote panels, documentaries, awards presentations. There will be a book signing by John Oates on Wednesday, January 17. Come out and meet him and maybe he’ll play a few songs. Well, come meet him unless you’re one of those people who’s all like, “John Oates? I can’t go for that. No can do.”

In all seriousness, though, other cities would kill to have this vast array of talent performing in their clubs… but other cities are not the Home of the Blues. If you have never been to this festival, you owe it to yourself to check it out. On Wednesday, Thursday and Friday nights, there are wristbands that get you into all the participating clubs for one low price. You can pick and choose the blues you want. It’s a musical buffet!

The removal of Confederate statues in Memphis has been getting a lot of national press. The Atlantic has a good look at Memphis’ inventive new approach to removing these statues.

Drew & Ellie Holcomb play the Orpheum tonight along with their band The Neighbors. They’ll perform Christmas standards and some Holcomb originals.

Lifehacker has a good point: always carry $20 in small bills. That allows you to tip people who would not typically get tipped on credit or debit cards: valets, housekeepers, bands, open bar bartenders, etc.

Tubby will go head-to-head with his son as the Memphis Tigers host Loyola at FedExForum. Tomorrow will be a doubleheader at the arena with the Grizzlies playing at 7.

That’ll do it for now. Time to fire up email and my other apps and be productive. The office closes at 3 so I will be at Silly Goose shortly after that. If more news comes in I will do a post before going out.