“When you’re unemployed, your full-time job is to be CEO of You, Incorporated.”

I hate quotes like that. But there’s some truth to this one, I guess.

One thing I haven’t been doing well as CEO of Paul Ryburn, Inc. is eating healthy lately – or at all, for that matter. My recent (but now past) bout of depression over the job loss and my mom’s loss left me without an appetite. No kidding, between Tuesday afternoon and this morning, the only thing I had to eat were two cups of Goldfish crackers. This morning I wasn’t hungry either. “I can’t go three days without eating, even if I feel like it,” I thought to myself. As a reward for finishing my resume, I decided I was going to force myself to go out for lunch. It’s Friday, which meant Ghost River Ono Poke Pop-Up Lunch would be going on.

The Facebook event listing said the opening time was 11:30. “Wait, I thought Ghost River opens at noon on Friday,” I thought. I decided not to take any chances. If the opening was 11:30, I didn’t want to risk having to stand in a long line if I got there at noon. I got dressed, walked to the garage, and drove down there.

I got a space on the street and walked toward the taproom. The sign on the door said 12. I started to walk away, then thought, “Maybe they’re open and no one bothered to change the sign.” So I walked up the steps to the taproom and, lo and behold, the door was open.

They weren’t open yet though – the beertender told me noon was the correct time. “He’s bringing the stuff in and setting up now, though. It won’t be long,” she said.

“Is it cool if I hang out?” I asked. She said yes and I ordered a Grindhouse Cream Ale, my favorite Ghost River beer. They discount the price of Grindhouse when the Grizzlies are on TV. Normally I am completely against drinking when I have the car, but I made an exception this time. “I’ll be here well over an hour since they don’t start for another 30 minutes,” I reasoned. “I’ll just have this one and I’ll sip it.” She checked my ID, swiped my card (the taproom is card-only; Ono Poke is card or cash) and poured the beer. It was kinda nice having the taproom all to myself a bit.

By 12 the guy was all set up to serve lunch. A lady came in and ordered. “It sounds like you know what you are doing here,” I commented to her.

“I come here every Friday,” she replied. “I’m addicted.”

The way it works is, you build your own bowl for $11. You start with your base of either white rice or mixed greens. “At the restaurant [on Poplar across from East High] we have two more bases.” I chose white rice.

Next up, you pick your protein, your choice of two scoops of tuna, salmon, or crab stick. I picked the tuna. “Tuna was the original poke,” I was told.

Then you pick three veggies from a selection of six. I picked corn, macaroni salad, and carrots. “Over in Hawaii, everyone eats macaroni salad,” the guy told me. The other choices were pineapple, cucumber, and… well, blast, the sixth choice escapes me. I should have taken notes.

Next you pick your sauce. There was a house ‘Onolicious sauce, a spicy sauce, a wasabi based sauce, and a ginger soy sauce. I decided to stick with the house sauce for my first visit.

Finally, you pick your toppings, again up to three from a choice of six. I picked fish roe, seaweed salad, and pickled onions. Jalapenos were an option but I didn’t feel like going spicy today.

“You did well for your first bowl!” the guy told me. 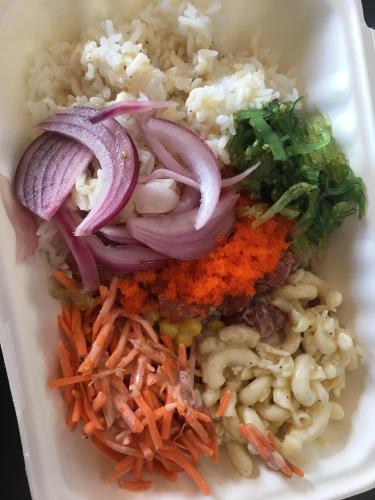 Beautiful photo of the food, but it seems like something’s… not there that should be, considering it’s a food pic. I miss my little troll. I hope she’s having a good rest in my memory box.

My fear that there would be a long line was unfounded. It never got busy. The guy told me he serves 20-30 on a typical Friday, but I doubt I saw 10 customers come in.

It was really good and I plan to be back. One thing I plan on doing as CEO of Paul Ryburn, Inc. starting next week is forcing myself to eat lunch out at least three days a week, and I can’t go to the same places I frequent at night. That breaks the day up into morning and afternoon, giving me two periods in which to be productive instead of just one long stretch.

I had enough left to take home and put in the refrigerator for tomorrow. $11 really isn’t that bad when you can get two good meals off the bowl.

I signed my tab and walked to the car. WOOOOOO! That Ghost River Grindhouse threw me for a LOOP! I was fine to drive home, but I had a pretty good buzz. In future visits to the pop-up lunch I will forego the beer in favor of a soda or water. Of course, I’m sure my nearly 3-day hiatus from food hurt my tolerance.

Hang on a second y’all, an email just came in.

From: CEO [paul@paulryburn.com]
To: Headquarters

The office will close at 2:00 p.m. this afternoon. For those of you who want to be good team players, some of us will be walking over to the Silly Goose for employee happy hour.

Well, I guess I better be a good team player! Outta here, back tomorrow with more news.