What a great night’s sleep! They put Freon in my air conditioner yesterday and it made a huge difference. So nice to have icy cold air blowing through the apartment all night. If you’re wondering “Why does he have his air on in February?” it’s because I live in an upper floor of a high-rise with south-facing windows. If it’s sunny out and even 55 outside, the inside of my place starts to heat up.

The annual Mid-South Farm & Gin Show is this weekend at the Cook Convention Center. The ginners are awesome – kind, generous, great to talk to. If you get a chance to welcome them to Memphis, please do!

THIS SUCKS. Chris Reyes and his family are fighting eviction from the condo he bought 25 years ago on an upper floor of 1 S. Main. The Madison Hotel wants to take over the building. This is not a one little guy vs. vast corporate empire story. The thing is, Chris has been an integral part of promoting Downtown and promoting Memphis and creativity in Memphis for his entire time here. If not for people like him laying the groundwork, bigger projects like the Madison might not have happened. And now they are trying to remove him from his home. Do the right thing, Madison owners.

Infamous American gangster, Al Capone, is in part responsible for the expiration dates on milk. It was reported that one of Capone’s family members in Chicago became ill from drinking expired milk, so he, in turn, lobbied for milk bottle dating to ensure the safety of children. pic.twitter.com/PSZ4v21vSQ

No kidding: Elvis Presley is running for Congress in East Arkansas.

Entrepreneurs, freelancers, and business owners: A local author has a new book out that you might want to read. Online Success: 7 Steps to Building a Powerful Internet Presence by Beth Gramling Sanders will teach you how to use all the different tools – social media, email marketing, your blog, and more – to build a relationship with your readers and turn them into customers.

I had lunch at LYFE Kitchen at the Chisca yesterday. Wanting to branch out and try something new, I got the turkey meatloaf. 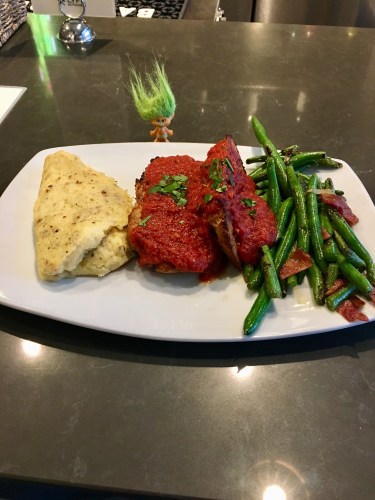 The flavor was there for sure, but the sauce on top of the meatloaf was a bit salty. Then again, I appreciated that they put in more effort than just squeezing a bottle of Hunt’s ketchup on the meatloaf as many places would have done. Those mashed potatoes on the left are actually not potatoes at all, but rather cauliflower. The bacon complemented the green beans well, and it’s nice to see bacon on a LYFE Kitchen plate – I understand the healthy eating concept, but we are in the South.

When the trolleys come back (why is “Someday Never Comes” by Creedence Clearwater Revival stuck in my head all of the sudden) we will be able to ride them for free the first two weeks.

Saw this as a promoted post on Facebook yesterday and it seems like a really good deal: A condo in the Claridge, 1100 SF, 16th floor, for under $120,000. Sounds like a great value investment. Prices in that area are likely to appreciate as the rebirth of Main Street makes its way farther north.

A closer look at the Day 1 Excessive Rainfall Outlook. The HIGH Risk includes the Memphis metro. Flooding threat will increase this evening and peak overnight. pic.twitter.com/QyxCnZdMvd

Whoa. Been a while since I’ve seen Memphis in the HIGH risk zone on one of these maps. Everyone be careful if you have to get out and drive tonight.

There will be a workout on Old Dominick’s roof tonight (not sure what will happen if it rains). HIT workout by Lauren Phelps followed by yoga with Amy of Sumits Yoga, and then it will be time to cool down with a cocktail.

Drinks with Dems happens tonight at the Brass Door at 6. Those who lean leftward are welcome to attend and talk about midterm elections, the orange shitgibbon in the White House, and whatever else is on your mind.

The Redbirds are hiring a public address announcer and a mascot. You could be the next Rockey!

Agave Maria is back March 12 and they will be hiring this week.

The redesign is over. The shelves are stocked with tequila and the tables are set. Now we’re looking for some amigos for all front of house and back of house positions. Email us at iwanttoworkatagave@gmail.com or apply in person from 11-2 this Thursday and Friday at 83 Union Ave. pic.twitter.com/LjC9GgPoS9

That’ll wrap it up for this post. I have a second interview tomorrow with the company with which I interviewed Monday, so it’s possible I won’t do a blog post tomorrow. Then again the interview is not until 2, so a morning post is possible. Back tomorrow or Friday with more news.